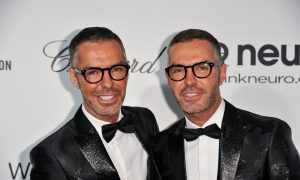 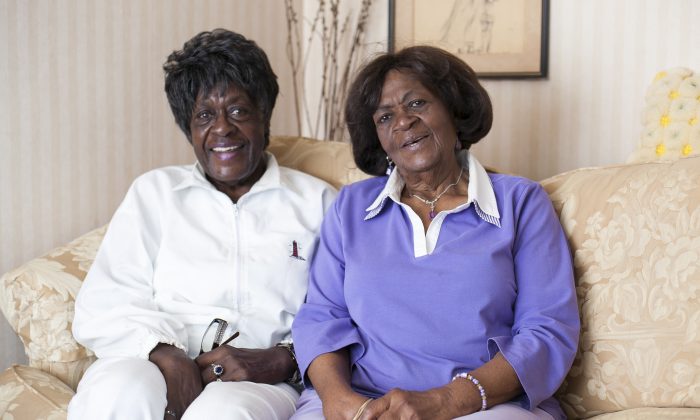 DELAIR, N.J.—Helen Murray, 92, and her 91-year-old sister, Geraldine Murray, have lived together their entire lives in a small, quaint southern New Jersey town not far from Philadelphia—living at their current address for the past 71 years.

The fourth and fifth children out of eight siblings, Helen and Geraldine never married, but they have no regrets, grateful and thankful for the abundance of friends and family that they share. They attribute their long relationship to their upbringing in which their parents instilled good moral values and religion as a base.

Helen, who loves to read books, and Geraldine, who loves to work in the garden, agree that they have stayed together all these years, not out of necessity, but because they can live together peacefully.

The Murray sisters’ mother, Ruth Whiting Murray, a homemaker, was the disciplinarian, while their father, Lacey Murray worked long hours seven days a week as a mechanic to provide for the family—and never laid a hand on them.

“My mother was the best teacher. I don’t know how you would put it, but we were well raised,” Geraldine said.

As a strict disciplinarian, their mother required them to go to church every Sunday, help others, and not expect anything in return, do their chores, and say, “Yes ma’am, no ma’am” or “Yes sir, no sir” to all adults they spoke to.

“We helped our neighbors,” Helen remembered. “If we went to the store for someone, we couldn’t take any money.”

Helen recalled the time her mother gave her a spanking for asking her aunt for a penny to buy candy.

“We got plenty of beatings, believe me when I tell you that,” Helen said with a chuckle.

But, the sisters agree that their mother’s strict hand and their father’s gentle chastising was necessary, and neither one of them are worse for wear.

“They may chastise you or get after you, but they did what they were supposed to do,” Geraldine said.

Their mother cherished family closeness so much that Helen remembers, “The last thing she said on her death bed, ‘I want you children to stick together, take care of one another.'”

Today, some may argue that Ruth Murray’s way of disciplining her children was too strict, but it’s this firm upbringing and strong family values that Helen and Geraldine attribute to their long peaceful relationship together and their lovable presence in the community.

“We went to church, we went to school, we went to a lot of nice affairs, and we loved movies,” Geraldine fondly said about the time spent with her sister Helen.

Geraldine does all the driving wherever they go together—as long as it’s not too far away.

Even when they were growing up, Helen and Geraldine did most things together and had many of the same friends.

Both sisters are too modest to say that they ever had any difficult times between them, when asked if either of them ever had to sacrifice something for the other. As far as they are concerned, they just did what they were supposed to do.

“It was just a way of life for us,” Geraldine said. “You’re just supposed to help one another; that’s all I know.”

Helen said her sister is kindhearted and a giver. “She thinks to do more for me than what I do for her,” Helen emphasized.

But Geraldine disagreed, saying, “I never thought that.” Geraldine loves Helen’s cooking, but could not put into words how she feels about her sister.

One thing they do agree on is that they “fuss” all the time, often speaking at the same time and chiding the other to “be quiet and let me talk.”

“We scramble sometimes, but ain’t nothing to it, just routine life; we still do things together,” Geraldine explained.

When you live as long as these two sisters, you go to a lot of funerals. Both sisters have said goodbye to all of their friends in the neighborhood, as well as five of their other siblings.

Their youngest sister Anna Graham, age 79, lives a few blocks away with her husband, Walter Graham. All three sisters are close and even though Graham doesn’t live with her older sisters, they all share everything and remain very close.

Now, Helen and Geraldine have many younger friends who enjoy their company.

“Younger people enjoy being around us because we don’t act our age; we are young at heart and fun loving,” Helen said.

The Murray sisters pride themselves in remaining active and pushing through the aches and pains. They don’t just sit around in a rocking chair. “I keep right on going,” Helen said.

“For us to be two old women like we are, I can’t get over how young our friends are, in the 50s with us two old women,” Geraldine marveled.

Their good friends range in age from their early 50s to late 70s. Helen considers 76-year-old Eva Richards (this writer’s mother) to be one of her best friends.

“I love my sister, but Eva; I just think the world of her,” she said.

Richards said she has never met people quite like Helen and Geraldine. “They are such nice people, and will give you anything,” she said.

Richards particularly recalls the time when her husband was in the hospital dying of cancer and Helen went to the hospital and stayed for several hours just to sit with her.

Geraldine cherishes their friendship with neighbor Darlene Hannah, age 57, who checks up on these oldest women in the neighborhood and does whatever she can for them.

“Darlene, she is so helpful with me and Helen,” Geraldine said with fondness. “I don’t know how she puts up with us; she is so good.”

At age 92, Helen is almost the oldest member of St. Mathews United Methodist Church in Delair, N.J. She quickly told of a 101-year-old parishioner who is the mother of the church.

Helen said she has been going to church since she was a child.

“My mother was a very religious woman,” Geraldine added. “She didn’t make us go, but we knew we had to go to church.”

Both sisters have been active in the church and in their community for as long as they can remember.

Geraldine helped to raise money to build St. Mathews. She recalled working many hours in a tent set up on the church ground.

Both sisters help their neighbors and other less fortunate families in the community. To this day, they still actively give whatever they have to others, through community organizations and independently.

They both regularly visit the “sick and shut-ins.” “We do a lot of that,” Geraldine said.

Some of the organizations they still remain active in include Concerned Citizens of Morrisville, Pennsauken Democratic Club, and United Methodist Women.

For over 70 years, the Murray sisters have been going door-to-door during election season, encouraging neighbors to go out and vote, and when they are finished pounding the pavement, they head back to the Pennsauken, N.J., election headquarters and cover the polls.

When asked what their secret is for staying together as sisters for 91 years, each sister was at a loss for words, at first.

In the end, both agreed that “what’s mine is hers and what’s hers is mine, that’s the way we live.”