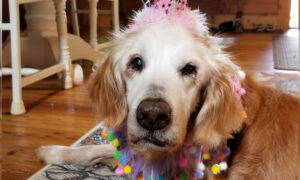 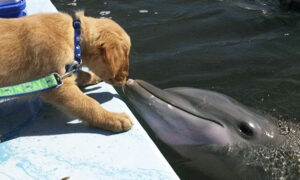 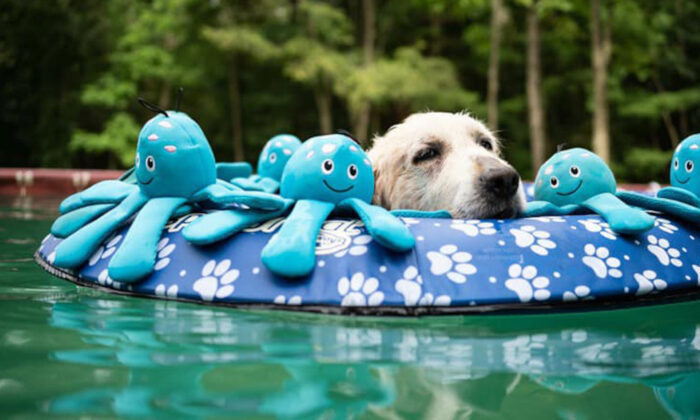 A 12-year-old golden retriever diagnosed with terminal cancer is living life to the fullest by ticking off items on its long and exciting bucket list daily, while also inspiring people.

Theo, a high-spirited canine, joined dog lover Jenny Leech’s family as a hospice foster on May 27. The dog was found abandoned in a Walmart parking lot and taken in by animal control. As the elderly pooch was never claimed, a dog rescue reached out to long-time fosterer Leech, according to a Facebook post.

The senior dog was covered in masses, indicating that something was wrong with him. Leech then found out that he had “testicular cancer that has metastasized to his prostate and his abdomen.”

Leech clarified on the post that Theo was not an eligible candidate for surgery “due to the amount of spread and his age.”

Despite his diagnosis, Leech, who is a meeting manager, knew that there was something special about Theo.

“He is a happy dog despite being so sick, we don’t know how he ended up abandoned but he has a love for life,” she told Caters News Agency. “His reaction to new things and experiences prompted me to put a bucket list on Facebook—it grew from there.”

However, providing Theo with the life he truly deserves required expensive care. That’s when Live Like Roo, a charitable foundation that provides financial assistance to families whose pets are diagnosed with cancer, stepped in.

“So, Live Like Roo offered to cover all of Theo’s cancer-related medical care, which is huge,” Leech told WLTX. “So, that was amazing right there.” The organization also went beyond just helping Theo with financial assistance.

Theo’s long bucket list began in June when he chose a blue octopus toy at a store.

“Theo was obsessed with the octopus,” Leech recalled.

A mom of three, Leech later decided to get Theo a backup octopus but had no luck finding it. So she reached out on Facebook, and by the next day, Theo was gifted a dozen octopus toys.

“The blue octopus has become a theme of the bucket list,” Leech said. Inspired to give Theo the best life, the community has been baking him octopus treats and creating accessories with the same theme.

In the months since the bucket list began, Theo has covered a huge range of adventurous activities, including visiting a farm, trying ice cream, being sworn in as an honorary police K-9 for a police department, going on a blind date picnic with a German shepherd name Sasha, sitting on a small skydiving plane, and having multiple photoshoots among others.

As more and more people started to get wind of Theo’s bucket list, they started to suggest ideas to Leech.

“[S]omeone offered to take him on a boat ride, another took Theo for a ride in his Mustang convertible… it was just amazing,” Leech told WGN-TV.

Additionally, a local brewery has even named a beer in Theo’s honor, calling it “Theo’s octopus,” as he carries his octopus wherever he goes.

In witnessing the overwhelming support from the community, Leech is beyond grateful.

“The generosity from others has been phenomenal,” Leech told Caters News Agency.

As for Theo, according to a volunteer at the shelter, he is getting a bit weak and has been sleeping for prolonged amounts of time. Leech shares that the happy dog has been a bit foggy and retires to bed immediately after dinner.

Leech, who has 10 other dogs at home, has no idea how long Theo will live, as the vet hasn’t given a specific time frame. She says she is taking each day as it comes and is helping Theo enjoy his last days.

“I am so happy I fostered him and I plan on bringing him on more adventures whilst we have him,” Leech concluded.