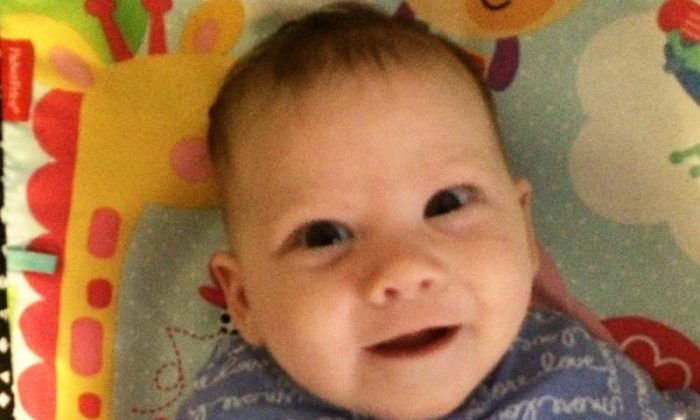 A Pennsylvania family is reeling in shock after losing their 16-week-old daughter while she was at day care for the first time.

Adrienne Kromer had been on maternity leave since her daughter, McKenna Rose Felmly’s birth on December 15.

On April 1, Kromer reluctantly returned to work for the first time. She dropped the baby off at Sharon’s Day Care in Treichlers community, about 10 miles north of Allentown, at 7:45 a.m, according to a GoFundMe page set up by Bryan Felmly, the baby’s father.

Kromer called in three times during the day to check on her daughter. She was told the girl was fine in the morning. Around lunch she was told the baby wouldn’t take a bottle. At 2:30 p.m. she was told McKenna drank some milk, was laid down, and quickly fell asleep.

That was “very unlike her,” Felmly wrote. “She always takes a while to fall asleep. Lots of rocking, swaying, cuddling, etc.”

While on her way to pick up her baby, at 3:39 p.m., Kromer received a call from the daycare.

The daycare worker told Kromer she went to check on the baby at about 3 p.m. and found she was not breathing. Later, Felmly wrote, the family learned a 911 was dispatched at 3:33 p.m.

“Adrienne arrived at the daycare around 3:50 and I arrived about two minutes later in my car but they had already taken our sweet princess to the closest hospital. We then get in my car and drive as fast as we can to get there meanwhile stuck in Friday afternoon traffic,” Felmly wrote. “Longest 20 minutes of our lives.”

The hospital staff put them in a room and told them a doctor will come to talk to them.

“The doctor came in and said, it’s not looking good momma… Adrienne screamed. I lost it,” Felmly wrote. “About ten minutes later they tell us they couldn’t save her.”

An autopsy was done on April 2. No signs of trauma were found. The family was told it will take 14 weeks to get final results—which will include viral and toxicology tests.

“We have no words, no answers, no nothing,” Felmly wrote.

The shock to the family was unimaginable. Kromer lost a child she had awaited for 8 years. Felmly lost his first child. Kromer’s daughter from a previous relationship lost her baby sister.

“I’m not sure how we are supposed to go on,” Felmly wrote. “There’s no reason why a 3.5 month old healthy baby girl should have lost her life yesterday. Adrienne’s first day back to work. McKenna’s first day at daycare.”

Parents, please hold your babies a little longer today and hold them close. Life is too precious.
— Bryan Felmly, father

According to Felmly, Kromer now thinks it was her fault for leaving her daughter and going back to work.

“She feels like she’s failed as a mom and I can’t make that go away for her,” Felmly wrote. “Adrienne didn’t want to go back to work for this very reason. And now we have to pay the ultimate price.”

While it may be hard to imagine a darker time for a family, Felmly concludes with a beautiful message to parents:

“Parents, please hold your babies a little longer today and hold them close. Life is too precious. Cherish every moment of every day. Be patient with your babies. Enjoy those sleepless nights because it’s additional time spent with your baby. We would take a million sleepless nights for the rest of our lives just to have her back with us,” he wrote.

“We would like each and every child to receive McKenna kisses. Our sweet little princess never learned to walk, but she now has wings.”