Families and Friends Delighted by Beauty and Spirit of Shen Yun 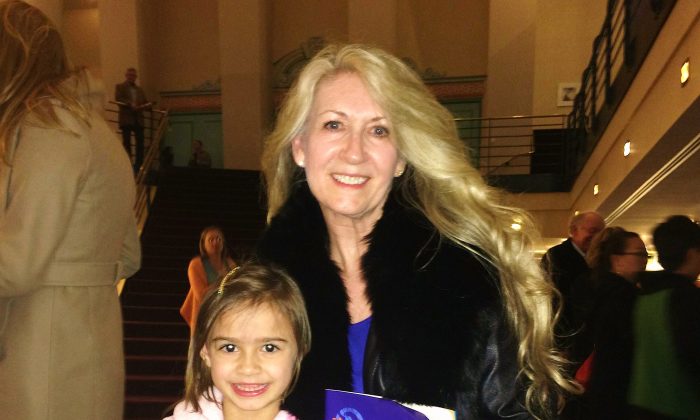 DENVER—When 5-year-old Hadassah saw a TV commercial for Shen Yun Performing Arts, she told her mother she thought it was beautiful and wanted to see them live.

“She absolutely loved it … She was on the edge of her seat the whole time,” her mother Victoria Minshall said after the Friday, March 6 performance at the Buell Theatre.

Ms. Minshall was touched by the beauty and spirituality in the performance.

“There were several times I was moved to tears,” she said.

She said the performance left her with a feeling of hope.

“It is that hope within all of us—to have that unity and that peace and that love. And to know that there is a God or a higher being that loves us, and that our lives can be transformed. That love and good conquers evil. It was a powerful message. It was very well done,” she said.

Shen Yun is a New York-based classical Chinese dance company dedicated to reviving China’s traditional, divinely inspired culture. As the program book explains: “China was once known as the Celestial Empire, it’s glorious culture said to have been brought down from the heavens. But under the last 60 years of communist rule, this ancient culture has been almost completely destroyed.”

The contemporary story The Power of Compassion stood out to 14-year-old Daler Mukhiddinov.

In a quiet, clear voice, Daler said during intermission that he found the whole performance moving and that piece “shocking and interesting.”

The story, which is based on real events taking place in China today, depicts the compassion of two practitioners of the spiritual discipline Falun Dafa, who help a policeman after he injures himself trying to arrest them.

Falun Dafa (also known as Falun Gong), is based on the principles of truth, compassion, tolerance, and has been persecuted in China for the past almost 16 years.

Daler said he was surprised to learn about the persecution. “I was very surprised about that because if you are showing good attributes, why should you be prevented from doing it?”

In one of the night’s four arias, soprano Guang Ling reminded the audience that “deceit and oppression will invite divine wrath” and “finding the truth will be the key to survival.”

Daler’s mother Heidi Menglibaeva and their family friend, Bill Johnson, who both work in sales at the global information technology company, IHS Inc., appreciated this message of truth they saw in Shen Yun.

“It reaffirmed the value of the truth,” Mr. Johnson said of the performance.

“What I appreciated was the soloist, the words that she was singing … about how the truth will not be seen because of the lies, and you have to seek the truth,” he said.

“Money can’t buy happiness, but the money I spent on this show bought happiness for sure, because I just feel fulfilled, and spiritually lifted, and happy. I smiled the whole time I think. My jaw is a little tired,” said Nikki Colgate, general manager at The Boulder Tea Company, who came with her two daughters.

“I was just really taken in by the beauty, … I just want to go back in and watch them more,” she said after the performance.

She found it sad that the Shen Yun performers “have to leave their country to embrace what they truly believe in” but was inspired by the message of compassion.

“So beautiful—the message … portrayed, especially loving your enemy. That was really important. And the compassion and embracing them and hoping to change them for the better; that was inspiring,” she said.

“There’s so much negative in the world. Everyone reacts negatively when people are mean to them. …[But] if you just pour out love instead of anger in response, the world would be better, wouldn’t it? … Hopefully more people will carry it out the door and try it in the world,” she said.

With reporting by Lily Yu and June Fakkert