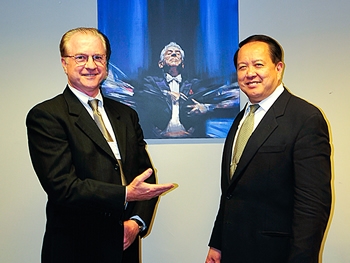 Famed Conductor Opens his Arms to the Asian Public

Supporting the Asian community through the arts is a major focus for Mr. Ling. He says, “We have a number of Asian musicians in the orchestra, and many Asian families in San Diego really appreciate [hearing] these very talented people [perform].”

An accomplished pianist, world-renowned symphony conductor, beloved husband and father of four children, Mr. Ling granted us an exclusive interview in his private dressing suite backstage at the San Diego Symphony Hall. The interview took place following his performance conducting the “Dvorak Symphony, No.8” and other seminal works for the opening of the 2009-2010 concert season.

When asked, “What would you like to say to The Epoch Times readers?” Ling replied, “I’d like to invite more Asian people to come to Symphony Hall here in San Diego.”

Mr. Ling shared his life story with us, covering his first experience at a piano when he was just 4 years old in Jakarta, Indonesia, up to his first competition at age 17 when he won the Jakarta Piano Competition, and how, one year later, he was awarded a Rockefeller grant to attend the Juilliard School of Music in New York City.

He also related how he completed a master's degree and studied piano with Mieczyslaw Munz, conducted with John Nelson, studied orchestral conducting at the Yale School of Music under Otto-Werner Mueller, and then went on to receive a Doctor of Musical Arts degree.

He was also Music Director of the Florida Orchestra, serving as its Music Director Laureate, and since 2004, has proudly conducted the San Diego Symphony. His contract has just been renewed through 2012.

Mr. Ling sat in his favorite chair and spoke of his lovely and talented wife, Jessie Chang, a world-class and accomplished concert pianist in her own right. And their musical gifts appear to have been passed on to their children. As he stated, “They all have a love for music.”

A portrait of his mentor and friend, Leonard Bernstein, hangs on the wall. With pride and respect, he said of Mr. Bernstein, “He has always been an inspiration to me.”

At that Mr. Ling rose to his feet and walked over to the painting on the wall, stopped to look at Mr. Bernstein for a second and turned to us, as if personally introducing us to the legendary composer and conductor. Smiling, the Maestro posed proudly as we snapped a few pictures in front of the painting.

With that we shook hands and thanked Mr. Ling for his warm hospitality. We then left with a deeper appreciation for the rich treasures San Diego is blessed to have in both Mr. Ling and the talented Symphony Orchestra he conducts.