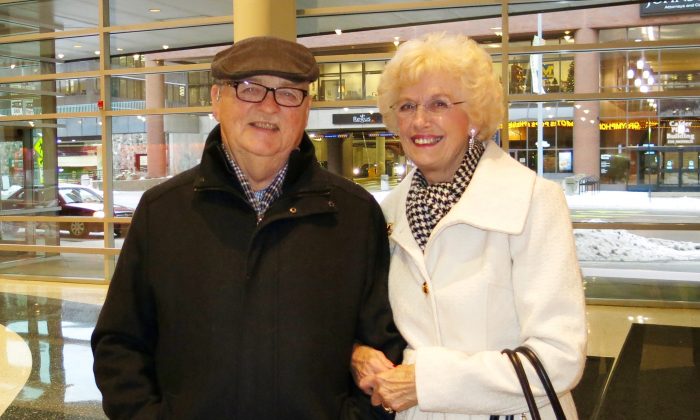 GRAND RAPIDS, Mich.—It’s not something they do very often, but when Mr. and Mrs. John Slendebroek visited the DeVos Performance Hall on Dec. 30, 2015, they were pleasantly surprised by everything they heard, saw, and experienced.

The couple enjoyed a performance by Shen Yun Performing Arts, a New York based company, which made a two day stop in Michigan as part of their worldwide tour.

For Mr. Slendebroek, who retired from his position as a construction manager, it was the choreography of the dancers that captivated him first and foremost. He could instantly see that the dancers were professional.

Being hard of hearing, Mr. Slendebroek couldn’t catch all the notes the sopranos sang, but the lyrics on the backdrop behind the singers helped him a great deal.

“That was … the most meaningful for me,” he said.

Shen Yun’s mission is to revive 5,000 years of divinely inspired traditional Chinese culture, and much of that is grounded in their faith in morals and the divine. Coming from a religious background, Mr. Slendebroek was surprised to see many references to the divine in the stories told through the dances and in the songs sung by the sopranos.

“It bonded me a little bit with the Chinese people,” Mr. Slenderbroek said.

He noted that the performance showed “a lot of history, a lot of suffering, and joy at the same time. I did know that the Chinese people … believed in a life hereafter but [they] certainly do, so to me it was a kind of an education for me.”

Even though it was the first time seeing Shen Yun for Mr. Slendebroek, the performing arts company has been touring the world for many years and has reached every part of the globe, from Sydney to London, from Paris to New York, and every year the stories, dances, costumes and the music are new.

“First time I ever went to a show like this and I wish I would have gone to more of them before,” Mr. Slendebroek said. The show inspired the couple to tell others about it and urge them to see the show with their own eyes.