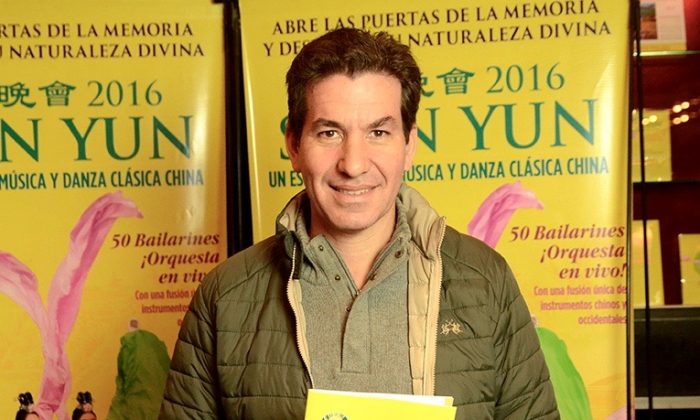 Andy Freire, Minister of Modernization, Innovation, and Technology for Buenos Aires, enjoyed the peacefulness of the performance by Shen Yun. (Elina Villafañe/Epoch Times)

BUENOS ARIES, Argentina—“It’s a solace for the soul and mind to enjoy with the family,” said Andy Freire. The comments by the Minister of Modernization, Innovation, and Technology for Buenos Aires summed up the experience of seeing Shen Yun Performing Arts for many in the audience on May 4.

The minister came with his children, who pointed out the overall aesthetics of the traditional Chinese dance and music performance, from the small details, to the precision the large group dances.

Mr. Freire said he liked “the combination of the intensity of the content with the sweetness and softness of all the movements.”

Shen Yun uses classical Chinese dance, known for its liquid grace—which accounts to its softness—to tell stories from China’s deep history. Some of those stories deal with the current persecution of people of faith in China—which accounts for the intensity Mr. Freire noted.

Despite the intensity of the stories, he discussed the peacefulness he felt from it.

From the performance Mr. Freire took away the idea of how to attain spiritual peace and deal with the daily jungle. He understood, however, that it is also “a reflection of exercise and an individual’s deep meditation that one has to practice with discipline,” he said.

Mr. Freire hit upon the very element of Shen Yun that enables people to feel peace from it. The performers—musicians, dancers, two bilingual emcees, and singers—engage in daily meditation and self cultivation. There is a devotion to the principles of truthfulness, compassion, and tolerance, as espoused by the spiritual path, Falun Dafa.

Martin Ocampo, Minister of Justice and Security for the city, felt much the same way about the performance.

“I think the most relevant [part] of the show is a feeling that everything is flowing between the music and the dance, in an environment that conveys peace,” he said, at the Teatro Ópera Allianz.

Mr. Ocampo loved the music, particularly the harmony. The music’s rhythms varied from lively to intrepid to calming, he said, as the musicians accompanied the dances.

He felt the message of peace in the stories showed a respect for traditions of the past as well as diverse cultures today.

“To find a tune, a good harmony, between what is new and the past, it guides us to an opportunity to do it much better. To recognize what we were makes us better in the present and it empowers us forward to the future. So it’s a great message for those who are government officials,” he said.

She was most struck by the performance’s beautiful underlying message of faith, which she saw as a message for humankind. She found that theme to be original because of the interaction between the divine and human.

“It conveys a message of how gods help human beings and also how human beings believe in gods. I found that exchange utterly interesting,” she said.

Throughout all of the 20 short performances that make up the entire program, Shen Yun celebrates the traditional belief of the Celestial Empire in virtue and reverence for the divine.

That Shen Yun is trying to recover the ways of antiquity and lost faith, Ms. Kodama appreciated.

“I think is such a positive thing in a world submerged in only the material things. Then, when they bring these ideas about other places’ mystical understanding, I find it very interesting. Very positive,” she said.