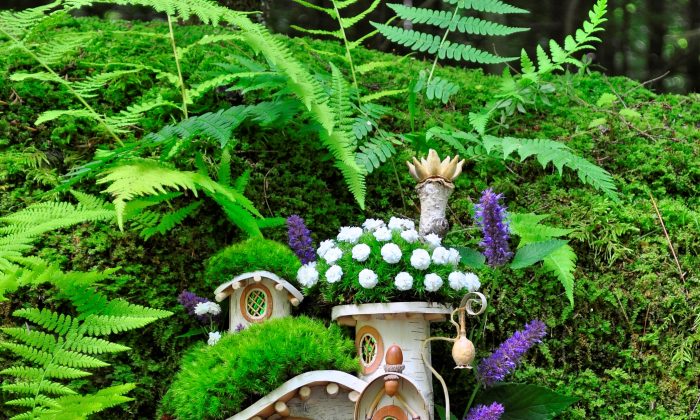 Sheer magic in the woods
By Linda Wiegenfeld

Fairies, the magical creatures that shimmer in the forest, were for many years believed to be hidden in the woodland landscapes of Monhegan Island, Maine. The locals there made small houses especially for them.

During a visit to the island, author and illustrator Tracy Kane was so inspired by the small structures—created out of natural materials and built in woods, beaches, backyards, schoolyards, gardens, and so on—that she wrote several books about them. Her children’s book series, fostering outdoor activity, creative thinking, and problem-solving skills, popularized the building of fairy houses both in the United States and around the world.

Like the locals on Monhegan Island, Sally J. Smith made houses in the woods for fairies from a very young age. That special connection to the outdoors stayed with her. Now she considers herself an environmental artist and makes stunning sculptures she calls “Eartherials” that echo the beauty of a special place or a moment in time. These sculptures often exist for only a few minutes, or hours at most. When she is finished building them, she creates a visual record of each piece.

A decade ago, Smith decided to re-connect with her childhood passion and began experimenting with fairy houses as an extension of her environmental works. These structures, she believes, are at the intersection of form, materials, and the need for home. Each house, usually between 12 and 18 inches tall, is a refuge, she says, that brings the observer back to the natural world, and to there be infused with a sense of magic and beauty.

When asked to conduct a workshop to teach others how to create the fairy houses, Smith declined, given that the slow, patient work didn’t lend itself to a workshop setting. Instead, she wrote a book, “Fairy Houses: How to Create Whimsical Homes for Fairy Folk.”

Aimed at skilled crafters, the book explores building three types of fairy houses: those built entirely in the studio and installed outdoors, those assembled outdoors with studio-built components, and those that are “wildcrafted,” built entirely on-site.

The house is made from river stones that were collected along the banks, and it took several days for me to complete the structure.
— Sally J. Smith, author and artist

More specifically, Smith’s book awakens the reader’s creative side with photos of her creations and gives the basics of building them. Smith goes into the “itty bitty nitty gritty” of creating the more intricate structures like windows and doors. (She says it’s sometimes enjoyable to make just these small components and incorporate them into a natural setting, for dramatic effect.) She also explains how to add lighting for an enchanting glow and how to finish the exteriors, with directions on how to construct two houses designed specifically for the book.

Below, Smith describes the peace and joy she felt in designing and building some of the tiny creations that she considers to be the most outstanding homes in her book.

“This magical cottage was built on a mossy bank of a mountain stream at the base of a magnificent ancient cedar tree that is probably 150 years old. The house is made from river stones that were collected along the banks, and it took several days for me to complete the structure. It was built near a popular camping spot, and after I had begun the building, a group of young men arrived to set up their campsite. I was worried that they might interfere with my work because they seemed a bit rowdy, and I was afraid they would get into mischief when unsupervised.

“On the last day, when I came to photograph the house with the fresh flower landscaping, someone had written “So Cool” in tiny pebbles in the “beach” below the house. I felt a bit ashamed that I did not trust that they would respect the work, and thrilled that they liked it.

“I came back a week later and a wild animal had destroyed the house. While it was sad to see the ruins, I carefully took all the stones and put them back in the river. All traces of the house were removed. It was a secret experience shared with a few young men and the spirits of the place, which made it very special to me.”

“High up in the mountains, I found a gorgeous pool of clean, green water. It was early autumn and the maple trees had started to turn. Summer was fading and soon this stream would be locked in ice. It seemed like the perfect place to create a tiny teahouse, to enjoy the fleeting change of seasons.

“It took two days to arrange the stones in the deep pool to hold the delicate birch-bark walkway out to the “floating island” where the teahouse was perched. Waiting for the dappled sunlight to filter through the canopy so that the one red leaf on the fern roof was illuminated was an exercise in patience … especially since the water had been so cold. The timelessness of the forest stream is what gives this magical location its power and mystery.

“What better place to stop and contemplate one’s place in the universe?”

“This house is larger (nearly 20 inches tall) and heavy due to the stonework base. I was still in mourning after the loss of my father. He loved the mountains and hiked them in all seasons.

“On this particularly beautiful late autumn day, I decided to pay him homage by bringing this house up to a mountain for a true Adirondack-feeling photo. This image was taken near the top of Little Crow Mountain overlooking the Keene Valley below. The effort required to haul the 20-inch fairy house up the steep trail helped me to release some of my grief.

“I had with me a very tiny, little fairy house built in the same style as this large one that held some of my dad’s ashes, sealed up inside. I left that tiny house tucked under a young and slender alpine birch tree looking out over the valley. Though the house left behind was very small in comparison to this larger lodge, my load was much lighter going home.”

Linda Wiegenfeld is a retired teacher. Send any comments or suggestions to LWiegenfeld@aol.com