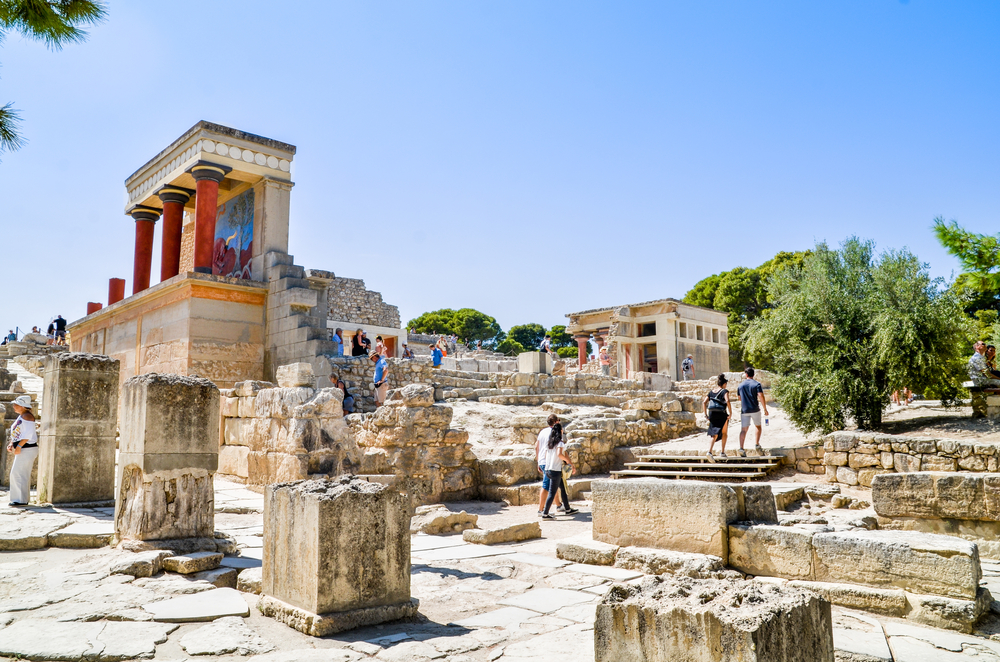 Fact, Fiction, and Fantasy: Exploring the Palace of Knossos

It didn’t look like any other ruins—not at all. In fact, in some ways, as I walked through this maze, the place looked like the inhabitants never really left, despite the passage of thousands of years. Walls were painted with colorful frescoes, chambers filled with stone furniture and bowls and other day-to-day items. Red columns rose above the rubble of Europe’s oldest city, surrounded by staircases and colonnades and the remains of workshops and storage rooms, plus a complex system of drains and pipes that snaked across it all. Did things really look like this, back when the Minoans lived and worked here, as far back as 5,000 years ago? Probably not, exactly. But it’s a long story.

At the Palace of Knossos, history meets imagination in rare and fascinating ways. The site is set about halfway across Crete, the fifth-largest island in the Mediterranean, and both the largest, and southernmost, in Greece. Archaeological evidence traces human settlement on Crete back 7,000 years, and the trade winds blew a number of major empires to this 3,200-square-mile island, which sits only 400 miles north of the Egyptian coastline.

“And they all left their mark,” one man told me, noting, quite sensibly, that the longer they stayed, the greater their impact. Crete even had its own independence from 1898 to 1913, ruled by a Danish prince for the initial years of the Cretan State.

But before them all, there were the Minoans. Generally regarded as Europe’s first advanced civilization, myth and history often become closely entwined in this corner of the world. What we know: the Minoans weren’t actually Minoan. At least, that’s not what they called themselves.

In legends surrounding Crete, King Minos was the son of Zeus himself, and married to Europa, a Phoenician princess. The island was home to a labyrinth, and that labyrinth housed the fearsome Minotaur, with the body of a man, and the head of a bull. Homer wrote about the sophistication of Crete in “The Odyssey,” and the historian Thucydides documented these myths as facts in the 5th century B.C.

But while Minos wasn’t real (and neither was the Minotaur), it’s clear that Crete was indeed home to a thriving and wealthy Bronze Age civilization that flourished between 3,000 B.C and around 1,100 B.C. Their trade extended to northern Africa, modern-day Turkey, and perhaps even Italy. These people exported glazed pottery, timber and textiles, and, using the profits, imported luxury goods like jewelry. Everything peaked around 1,600 B.C., when the island was highly developed and home to many cities and palaces. And Knossos was its capital.

Located near the modern city of Heraklion, just inland from the northern coast of the island, the ruins at Knossos may or may not have been an actual palace. Because it’s unknown whether the civilization we now call the Minoans operated as a kingdom, with a proper royal family, this “palace” may have been more of an administrative center, with power over surrounding towns.

An informational panel on-site presents both the pros and cons of this restoration, noting that while initial work was aimed solely at restoration, beginning around 1925, the interventions became more wholesale. Among other things, “wooden beams and wooden Minoan columns were made of reinforced concrete and rendered with paint,” it explains.

The changes, it says, in rather restrained language, “invited a variety of reactions.” On one hand, perhaps they were helpful for the protection of the site, and for filling in the gaps on the architectural details. But they definitely reflected Evans’s ideas, and the styles of the first half of the 20th century. While “largely irreversible,” they still form “an inextricable part of the monument and its history.”

The end result, when you visit, is rather whimsical. I spent the better part of a day rambling around the 150,000 square-foot site, from the Stepped Portico to the Royal Villa. You’re never quite sure where the historical record ends and fantasy begins. It’s easy to get lost in the legends, all the while trying to picture actual day-to-day life in this place—like Evans, to imagine these residences and commercial spaces at full tempo, people drawing water from the cisterns, walking down paved passageways, firing pottery, buying and selling their wares.

I marveled at the famous “bull-leaping fresco” painted around 1450 B.C., and paintings of dolphins, a vibrant blue and yellow and pink and orange. I walked up and down the staircases, and through rooms large and small. The afternoon heating up, the rest of the island beckoned, including, notably, pink-sand beaches and cool aquamarine waters, not so far away. And so, I left the labyrinth unscathed, the Minotaur now just a memory.

Fly: Heraklion’s Nikos Kazantzakis International Airport is the second-busiest in Greece, with mostly seasonal flights connecting the island directly with a number of large European cities. The airport also offers several flights a day to Athens.

Getting Around: The archaeological site at Knossos sits just south of Heraklion and can be reached by taxi, although many visitors opt for a guided tour, and these often include hotel pick-up. If you’re looking to explore the rest of the island, you’re best advised to rent a car in Heraklion.

Stay: Just a few minutes away in Heraklion, the five-star Galaxy Hotel offers a pool and two restaurants within walking distance of shops and pubs. https://www.galaxy-hotel.com/en/

Take note: The Heraklion Archaeological Museum in Heraklion displays an impressive collection of artifacts spanning more than 5,500 years of history, including a number of examples of Minoan art found at Knossos. https://heraklionmuseum.gr/