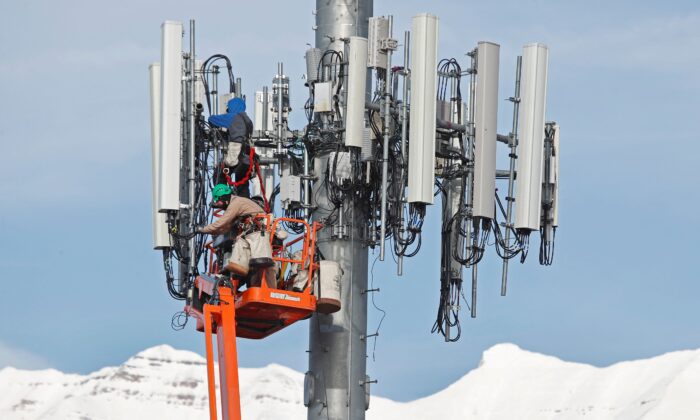 A contract crew for Verizon works on a cell tower to update it to handle the new 5G network in Orem, Utah, on Dec. 10, 2019. (George Frey/AFP via Getty Images)
Tech

FAA Clears Way for Some Jets to Fly Within 5G Airwaves

From Alan Levin
By Bloomberg News

U.S. aviation regulators granted approvals that will allow some jetliners to operate within zones where new 5G wireless services are set to begin Wednesday, significantly reducing the potential impact on flight schedules.

The Federal Aviation Administration said on Sunday airline manufacturers had shown that the mobile-phone signals won’t cause interference with critical aircraft equipment on certain Airbus SE and Boeing Co. models.

New 5G services by AT&T Inc. and Verizon Communications Inc. set to begin across numerous communities in the U.S. broadcast on radio waves that are adjacent to those used by so-called radar altimeters on thousands of airliners, helicopters, and other aircraft. Tests showed that the altimeters could give false readings in the presence of 5G signals.

“Even with these new approvals, flights at some airports may still be affected,” the FAA said in an emailed statement. “Passengers should check with their airlines if weather is forecast at a destination where 5G interference is possible.”

The FAA, working with aircraft manufacturers and the wireless companies, has been conducting more detailed analysis narrowing the potential impact on the aviation system in recent weeks. It approved numerous models of Airbus and Boeing aircraft equipped with two types of radar altimeters, accounting for about 45 percent of the U.S. commercial fleet.

But the complex work continues and with a majority of airliners still subject to limitations, some level of flight disruptions are likely.

The FAA action doesn’t include Boeing’s widebody 777s and 787s, nor does it include any of the smaller regional jets popular in the U.S. aviation system. Additionally, some planes listed in the decision may have been equipped with other altimeter models and aren’t covered.

An airport trade group said the introduction of the 5G services should be delayed to reduce the impact, even as it called the FAA’s action “a step in the right direction.”

The decision will allow landings during low visibility at as many as 48 of the 88 U.S. airports with equipment allowing such arrivals, the FAA said. Use of highly sophisticated instrument landing systems are considered high-risk operations and have been among the most impacted by the agency’s 5G restrictions.

Under a compromise reached earlier this month, AT&T and Verizon agreed to limit placement of cell towers near 50 of those 88 U.S. airports to lessen the impact for six months.

The FAA signaled in its statement that while it’s exempting some aircraft from the strictest limitations, it may also add new restrictions. The agency on Friday issued a directive adding restrictions on 787s landing in the presence of 5G signals and other such actions are possible.

“The FAA also continues to work with manufacturers to understand how radar altimeter data is used in other flight control systems,” the agency said in the statement.

The wireless companies paid more than $80 billion for access to the frequency band, allowing them to offer far faster 5G mobile-phone services. But aviation groups and the FAA have been concerned that it could compromise aircraft safety.

The agency last week issued more than 1,400 flight restrictions at airports and geographic areas across the country. The action announced on Sunday exempts or partially exempts planes from those orders.