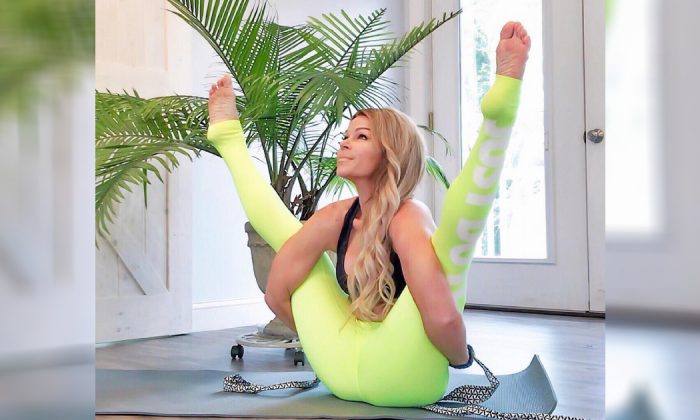 Extreme Yoga Pose Sent Woman to Hospital With a Stroke

A Maryland woman had a stroke from performing a physically demanding yoga movement back in late 2017 and she is still recovering from chronic pain nearly 18 months on.

Rebecca Leigh, 40, still suffers from severe memory loss, headaches, and pain in her neck and face since she tried to perform a hollowback handstand at her Gambrills home, 23 miles northeast of Washington, on Oct. 8, 2017.

The headstand requires extending her neck, dropping her hips back and arching her lower spine. After finishing the movement, Leigh felt very pleased with herself but quickly noticed her vision was blurry and her left arm would uncontrollably flop around when she tried to put her hair into a ponytail.

She initially dismissed the loss of vision and control in her left arm as a slipped disc in the neck, which was diagnosed back when Leigh was in her early 20s.

It was only two days later when she noticed her pupils were different sizes that she realized there could be something “very, very wrong.”

She and her husband Kevin, 45, immediately presented to the nearby hospital emergency room where the woman had a magnetic resonance imaging (MRI) scan that found she had actually suffered a stroke.

This man right here. 💙 For the past three weeks he has been my shoulder to cry on, my voice of reason, my constant reassurance, my strength when I am weak, the giver of jokes when I need a laugh and hugs when I need comfort, the quieter of my “what ifs”, my driver, my house cleaner, my dog walker, my cook, my medicine giver, my armpit shaver, my shower helper, mail getter, errand running, laundry doer, my “visiting angel”, my hand holder, drs appointment note taking, parent communicator wither, head rub giving, droopy eye checking, best friend and so much more and everything else all mushed together into the most handsome package ever. I don’t know if I could ever repay you or thank you enough for all that you’ve done for me during this crazy time but I’m certainly going to spend the rest of my life trying. Thank you for being the best husband and friend anyone could have ever asked for. The best day of my life was the first day I saw your face. I love you more than I’ll ever know how to say. . #teambecberk . #stroke #strokerecovery #strokesurvivor #strokeawareness #youngstrokesurvivor #poststroke #lifeafterstroke #strokesupport #strokeassociation #fuckstroke #strongerthanstroke #strokessuck #carotidarterydissection #beyondblessed #obsessivelygrateful

Doctors in the neurological intensive care unit spent five days trying to determine how Leigh could have had a stroke even though she exercised, ate healthy, and did not smoke.

“After all the blood work, ultrasounds, MRIs, and CT scans, it was finally a CTA scan that explained it,” she told the Daily Mirror.

Yep, well. This was me 1 year ago. Well, 1 year & 3 days ago. Because it took 3 days for my right eye to droop for me to go to the emergency room. It wasn’t losing my peripheral vision or seeing wavy lines or a black curtain close over my sight. Or the dizziness or almost passing out. Not the massive headaches, face or neck pain. Not my left arm not working. Not the very loud & clear sound of a pop & gurgling in my ear & brain. But 3 days later, after all of that happened, my right eye looked weird & I went to the emergency room where I stayed a week in the intensive neurological care unit. That’s where I found out I had torn my carotid artery & had a stroke & developed an aneurism. It took 3 days for me to go, because the last thing a 39yo, fit, nonsmoker, clean eating, stress free, happy girl thinks, is that she could be having a stroke. But I did. I tore my carotid artery by hyperextending my neck during hollowback handstands. A pose I’ve done a gazillion times before. It’s rare but it happens. (Google “carotid artery dissection & yoga”) For the first 3 months I was basically just breathing. I slept a lot. A lot, a lot. I only got out of bed to use the bathroom. I lost 20 lbs. My brain felt like it was put in a vice grip that had nails all around it. It was miserable. It wasn’t until around 6 months later that I started to feel somewhat more human again. In the beginning, the anxiety was terrible. I couldn’t go more than a few moments without worrying another stroke was going to happen or that my aneurysm would burst. Death was something I worried about constantly. Today I am doing much better. I have a headache and face pain from the nerve damage everyday. I regained my arm but it feels like a very low voltage of electricity is constantly going through it. My vision honestly SUCKS. My right eye, better than it was, is still noticeably different to me. This is something that I obviously still think about every day, but I am no longer consumed with anxiety or the thought of death being over my shoulder with every second. I know how lucky I am. I know how much differently this could have been. I am obsessively grateful. 1 year. 1 year. I am so very blessed.

Doctors informed Leigh her right carotid artery, one of four responsible for delivering essential blood to the brain, had torn while doing handstands.

The tear had sent a blood clot to her brain, caused a stroke, and also caused a small bulging aneurysm to develop. For six weeks after she suffered from constant headaches, difficulty in getting out of bed, and pain in her eyes when she was in a bright environment. She also lost 20 pounds.

“The pain it caused my eyes was excruciating. My usually bright, sunlight-filled house was kept completely dark for the first few months,”  said Leigh who ran a mobile sunless tanning company. “The stroke caused massive head pain, unlike any headache I had ever experienced before … the nerve damage made any sort of light unbearable.”

She also constantly heard a “whooshing” sound in her right ear for three months.

“That was the sound of the blood trying to get through my artery up into my brain,” Leigh said.

Just a month after having the stroke, she jumped back onto her yoga mat and decided it was time to practice less physically demanding moves.

“I simply sat on my mat in lotus pose and listened to my breath. I slowly led back up to simple stretches and the poses that felt most safe to me,” she said. “I knew that if I didn’t get back to my practice relatively soon after my stroke, I never would.”

Although she happily practices sun salutations more than a year after the stroke, she doubts she will ever completely recover to her former health condition.

“I glanced out the window at the first signs of spring. The sky was almost blue, the trees were almost budding and the sun was almost bright.”🌞 Welcome to day 4 of #herecomesthesunyogis! Today is plank pose and I’m getting a little funky with mine! I am loving our gallery so far guys!!!! Please be sure to check in with my lovely cohosts to see their variations on today’s pose! 🌞 my beautiful outfit and mat are by our wonderful sponsors, @onzie and @gocleveryoga . Your Hosts: @yogaromina @rebeccahleigh @rosariamazzon @mrs_khaleesi_gaither @themuscleboundyogi . Our Generous Sponsors: @onzie @zenpolitan @infinitystrap @gocleveryoga @insideoutsideoutsidein . . To be eligible for a prize: ➡ Repost the flyer & tag a few friends to join. ➡ Follow all hosts and sponsors. ➡ Post every day using our hashtag #HereComesTheSunYogis so we can find you! ➡ Show each other love and support! ✳ It would be helpful to show what country you live in, as some prizes cannot ship to every country – if we know where you are, your chances of winning are GREATLY increased! . ☀ Pose line up for those who like to plan ahead ☀ 💛1. Mountain 🌞2. Chair 💛3. Forward Fold 🌞4. Plank 5. Updog 6. Downdog 7. Warrior 8. Yogis Choice . #plank

She cannot speak for more than a few minutes and feels a constant “tingly sensation” between her elbow and hand that is almost like a wave of electricity zapping back and forth.

“It’s very hard to recover from something so scary that came out of nowhere,” she said. “You think you’re doing everything right and then when something like this happens, it’s hard not to think that it can happen again.”

Leigh is devoting part of her time to encouraging other hardcore yoga fans through her 26,000 followers on social media to seek a primary health care professional immediately, if they feel unwell.

“I wanted to share my story so that something like this doesn’t happen to any other yogis. I had never heard of it happening before it had happened to me,” she said. “If I had read of just one incidence of something similar, I would have known that a stroke was a very real possibility when I was experiencing my symptoms … that it wasn’t my neck, my herniated discs, or my nerves. It was my brain gasping for its life.”

Fall in love with taking care of yourself. ❤ How adorable is this “Steal the Show” set from the February @ellieactivewear subscription box? 💕😻💕 Ellie is all about the details and I love the unique bubble cutout in the leggings! The sports bra is so cute too with the special detailing on the back. All of this for just $39.95! What a steal! 😍🦊 Sign up at ellie.com to get yours today! . #LoveEllie #februaryellie #ellieactivewear