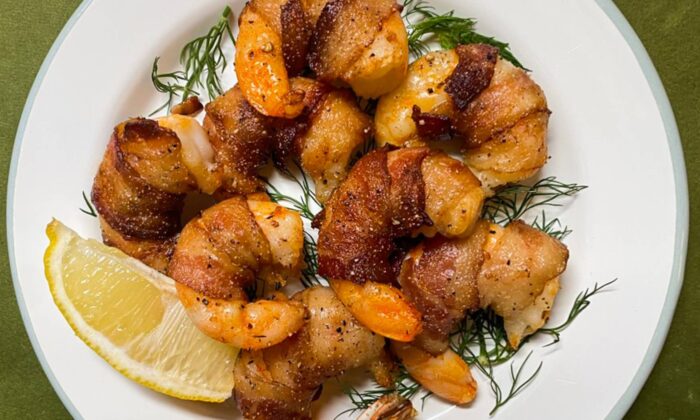 Play around with the seasonings and dipping sauces, but keep the extra-crispy bacon. (Renae Wilson/TNS)
Recipes

Some appetizers seem to disappear more quickly than others. Take bacon-wrapped shrimp, for example: If they’re on the table, it’s almost guaranteed that they’ll be the first to go. They’re just irresistible.

Play around with the seasonings and dipping sauces for some variation. And, of course, you can’t go wrong with just dipping in clarified butter.

No one likes soggy bacon. To get the bacon extra crisp, give it a head-start by partially cooking it in the oven before wrapping the shrimp. Before you start wrapping the shrimp, pop your baking tray back into the oven to get it piping hot. The reason? When you place the bacon-wrapped shrimp on the baking sheet, it’ll get a nice sear on the bottom while the top gets crunchy under the broiler.

Arrange a rack in the middle of the oven and heat the oven to 375 degrees F. Cut each bacon piece in half lengthwise, creating two thin strips per slice.

Place the bacon strips on a rimmed baking sheet and bake for 6 minutes. The bacon will start to render its fat but it’ll remain pliable and won’t brown. Meanwhile, place the kosher salt, black pepper, garlic powder, and smoked paprika in a medium bowl and stir to combine. Add the peeled and deveined shrimp and toss to coat.

Remove the bacon from the oven, then transfer to a paper towel-lined plate to drain. Turn the broiler on to low. Wipe off the baking sheet the bacon was on, then place in the oven to heat while you wrap the shrimp.

Wrap each piece of shrimp with bacon, overlapping a little, down the length of the bacon.

Broil, rotating the baking sheet halfway through, until the bacon is slightly crisp and the shrimp are cooked through, 4 to 6 minutes total. Serve with a squeeze of lemon and a dipping sauce of your choice.

To make ahead: Cook the bacon, wrap the shrimp, and refrigerate in an airtight container overnight. Heat a rimmed baking sheet under the broiler for about 10 minutes, then broil the shrimp on the baking sheet.

This recipe can also be done in an air fryer. Air fry the wrapped shrimp at 400 degrees F for 6 to 8 minutes. For crispy bacon, depending on the size of your air fryer, cook the shrimp in batches so as to not crowd out the shrimp (which will result in soggy bacon).

Refrigerate leftovers in an airtight container for up to two days. Enjoy cold or at room temperature. Reheating the shrimp is not recommended, as the shrimp will become hard and rubbery.