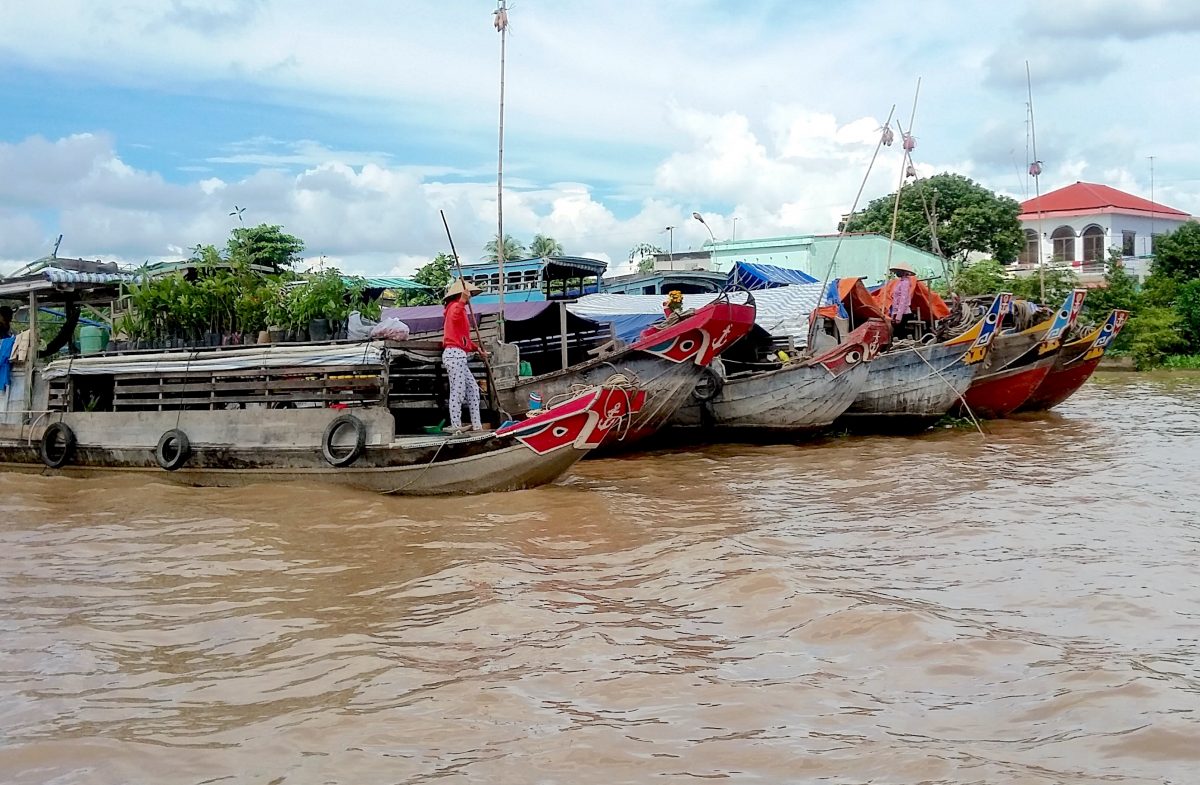 Food products are displayed for sale on bamboo poles at the Cai Be floating market. (John M. Smith)
Travel

While on a Viking River Cruise through Vietnam, my wife and I stopped at several fascinating villages along the Mekong River, allowing us to get a glimpse into daily life along this “Mother River of Southeast Asia.”

It seemed to me as if many of these villages were frozen in time, for it was a return to former, traditional farming and fishing practices. Many of the locals live in simple stilted houses along the waterway and travel from place to place by way of their small boats, past floating water hyacinths and a plethora of rice fields. The Mekong serves as their main highway, primary food provider, washing machine, and bath house.

One of the villages at which we stopped was Vinh Hoa, also known as “Evergreen Island.” We walked through the small village and witnessed traditional Vietnamese farming, where the land is ploughed and the crops are raked by water buffalo. As we strolled along, the village children joined us, looking for some candy from the tourists, for this has become a new tradition here. Some of the stilt houses had attached areas in which to keep cattle, and several also had mounds of dried peanut plants to be used as cattle feed.

We also stopped at a floating fish farm where thousands of tilapia were trapped in cages, raised, fed, and then sold. I was told that there were about 120,000 fish in the cages and they were fed about 30 bags of fish food per day, which could get rather expensive for the fish farmer at $16.00 per bag. I was given the opportunity to throw some food into the holding tank and witnessed the immediate feeding frenzy as the tilapia rushed to the surface for the food, creating much noise and splashing.

We learned that there are many “specialized” villages in Vietnam, where the inhabitants concentrate on sedge grass weaving, creating wonderful mats (as in the village of Uzi), or carpentry (such as Kim Bong), herbs (Tra Que), pottery (Phu Lang), ceramics (Bat Trang), silk (Van Phuc), or conical hats (Chuong). There are also specialty snake farms, such as the Dong Tam Snake Farm, where snake venom is produced for both local use and export. We saw such items as snake wine, bottled cobra, and scorpion whiskey for sale!

At Cai Be Village, we visited a small factory where locals produced a variety of goods. We watched as the workers made such items as crepes, sticky rice squares, taffy candy, and rice popcorn—and then some of us tried the hands-on experience, too. I particularly enjoyed creating the rice popcorn—and then eating it.

One of the unique businesses that we visited along the Mekong was a brickyard, where bricks were made from the river’s mud and piled up in the factory. I was rather surprised to see that the heavy labour was all done by women, and they worked so quickly that I thought they must be being paid by the piece or by the amount accomplished. Sadly, I learned that they worked at this pace to simply keep their jobs.

Of all the glimpses into village life, though, I’d say that visiting the various markets was one of the best experiences. Here, the locals both sell their goods and shop for their daily supplies, checking out the freshness and the price.

In Sa Dec, for example, I was witness to the locals really shopping—rather than a market primarily geared to tourists—and it was wonderful. This particular market wasn’t filled with souvenir stalls for tourists; instead, there was an awesome variety of vegetables, fruits, fish, spices, eggs, flowers, and clothing items. Motorcycles, scooters, and bicycles intermingled with the foot traffic in the crowded market area, and there were the raucous sounds of live chickens and ducks to enliven the scene even more.

There was even an extensive wet market, where such items as snails, frogs, crabs, prawns, fish, water beetles, and eels were kept alive in plastic buckets by using air bubble machines that were run off batteries (as in a fish tank). Talk about fresh! We tourists may not be too keen on some of these “specialties” but it was fascinating to see them all on display. There were even chicken feet and skinned rats and frogs for sale!

Another intriguing experience was our visit to the floating market of Cai Be, where wholesalers hang samples of the goods they sell from a tall bamboo pole on their boats. Many of these sellers are fruit vendors, so you’ll see lots of bananas, oranges, mangosteens, mangos, and rambutans. All the goods arrive at this floating market via raft and boat, and it’s at its busiest in the early morning hours. The goods are then sold in bulk to smaller operations.

We explored this area on a sampan, and as we travelled, we saw locals going about their normal routine; not only was there the usual haggling between buyers and sellers, but there were also people simply cooking food, washing clothes, and bathing children.