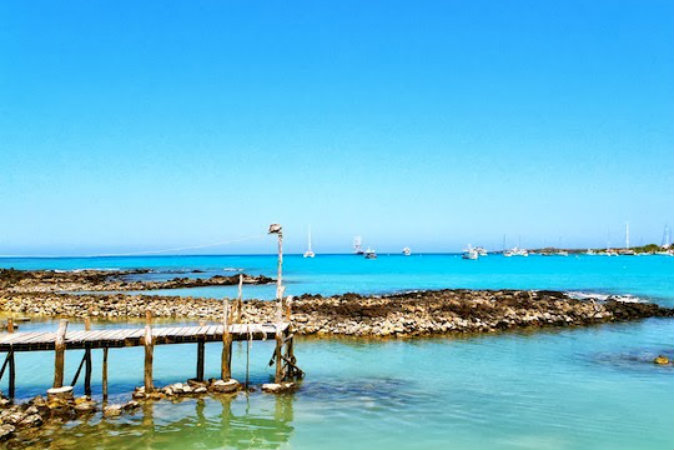 Shunned by the Spaniards but loved by pirates, Santa Cruz – after Isabela Island the second largest isle in the Galapagos archipelago – was the first one to receive visitors. This tradition continues even today as Baltra Island, just across Santa Cruz, serves as the main arrival point of visitors coming to the Galapagos Islands. This island was named ‘Santa Cruz’ meaning ‘holy cross’ by the Spanish, however the British named it ‘Indefatigable’ after the ship that had led them to its shores. Upon arrival in Santa Cruz, after a short flight from Quito, I couldn’t believe that I finally made it. It took some blinking of eyes and literal pinching to realize but it was true .. I arrived to this unique place, named Galapagos Islands, a paradise on earth.

Both the Lava Tube and Los Gemelos can be found in the highlands. In comparison to the dry lowlands, these highlands are lush-green and the home to many small birds like the Darwin finch, the bright red Vermillion flycatcher, the Galapagos dove and the short-eared owl. The Lava Tube is an illuminated natural tunnel extending for more than 400 meters. Hiking through this tube is a unique experience, have you ever seen stalagmites and stalactites formed by lava? The mineral-colored walls provide some great photography opportunities.

‘Los Gemelos’ or in English ‘twin craters’ are two collapsed chambers formed by lava. Over the years, these holes became empty and what is left behind now are two huge pit craters. Standing at the edge of one of these huge holes – while gazing at the beautiful natural landscape – makes you loose track of time. The trees in this area belong mainly to the Scalasia, Guayabillo and Psidium Galapageium families. Most of the branches are covered with orchids and epiphytes, so this trip is also a dream for botanic lovers.

Giant Tortoises are one of the main attractions in Santa Cruz, in the El Chato wild reserve you can observe them in their natural surroundings. Amongst the various zones that span the topography of Santa Cruz, the ones bordering this reserve are agricultural, transition and finally wilderness. Although tortoises abound in all three zones, they are fun to search for within the reserve since here they are at their natural best.

While walking through the verdant highland forest and spotting the various species of birds, orchids and heliotropes, be alert for any sounds. As these giants make their way through the undergrowth they tend to crush branches and twigs and this snapping sound is an indication that one of them might be close by. A spot which is frequented by the Giant Tortoises is the banks of a lagoon. Walking around these wild tortoises is a unique experience, one you will never forget.

When you think of Santa Cruz, you automatically think of snorkeling. There are however many other aquatic activities, sea kayaking to name one. The sea kayaking tours usually start on the Itabaca Channel, the channel between Baltra Island and Santa Cruz. It is recommended to embark on this activity with a guide not only for safety reasons but also to learn more about the wildlife which you will spot along the way. There are lots of snorkeling opportunities while you kayak along the shores of this paradisiacal island. We saw many brown pelicans and other sea birds while kayaking and while snorkeling we spotted quite a few sea turtles.

Charles Darwin visited the Galapagos Islands on board of the HMS Beagle during the 1830s’ and it was the knowledge he gathered during this visit that helped him formulate his famous evolution theory based upon natural selection. More than a hundred years later, when a biological research station was inaugurated in Santa Cruz it was but natural to name if after the great scientist who was the first one to have closely studied the islands. Run by a non-profit foundation named after the renowned scientist, this research station aims to preserve the environment and the biodiversity of the Galapagos Islands.

Within the research station, you can observe many different tortoise species coming from the various islands in the Galapagos archipelago. The research station also has a breeding program in place to increase the tortoise population. Once the tortoises are old enough, they are released on their island of origin. The most famous inhabitant of the station was without any doubt Lonesome George who unfortunately died in June 2012. Lonesome George from Pinta Island was believed to be the last of his species. During his stay in the research station they put him together with 2 females from Isabela Island but unfortunately all mating attempts failed.

Amongst the variety of wildlife you’ll find on Santa Cruz, the many sea lions will for sure stand out. Their favorite spots are the docks, the Santa Cruz fish market and … our boat 🙂