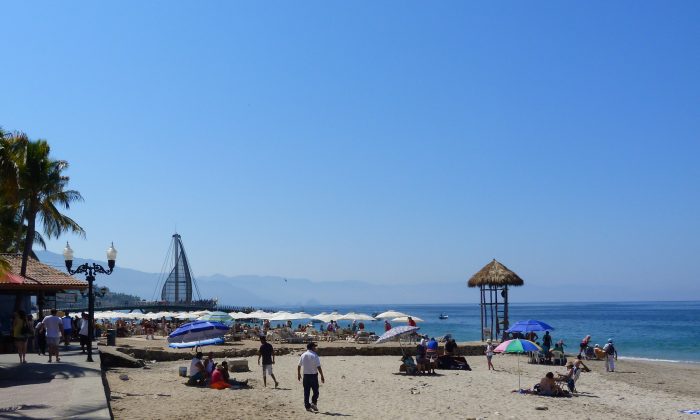 And now for something completely different: Dinner in the Sky!

The air was balmy, the moon was full, and the stars were twinkling their amusement at 22 people enjoying a gourmet meal, prepared by a celebrity chef, on an open grid platform floating in the sky above the five-star luxury resort Casa Velas.

Dinner in the Sky is a Belgian-based novelty restaurant service that uses a crane to hoist its diners, table, and wait staff 150 feet into the air. This was its first visit to Puerto Vallarta and I was lucky enough to be able to experience this unique way of dining.

I had come to Puerto Vallarta to enjoy the sun, the sea, the colours, and the joie de vivre of this vacation paradise on the Pacific Coast of Mexico.

Puerto Vallarta’s Banderas Bay is one of the largest and most beautiful natural bays in the world. The famous cement boardwalk, the Malecón, with its whimsical contemporary art sculptures for all to see and touch, hugs the bay.

My guide Chilo and I began at the Malecón’s north end at the spiral sculpture “Los Milenios” (“The Millennia”) by Mathis Lidice that portrays life’s evolution through time. At the base are the waves and water that birthed life. As the eye proceeds up the spiral, Lidice represents in 1,000-year periods our development—including a nod to man’s search for the divine—until at the top there is a figure of a young woman releasing the dove of hope. Curiously, a real frigatebird is usually perched atop the sculpted one, also in hope—of spying a meal.

The sculptures along the Malecón were gifted to the people of Puerto Vallarta by donations from wealthy citizens and the local government and in some cases by the artists themselves. While many are memorable, I particularly enjoyed the contemplating couple in “La Nostalgia” by Ramy Barquet (1984), and who could not be titillated by the circle of anthropomorphized sea creatures in “La Rotonda del Mar” by Alejandro Colunga. Each of the figures in the circle is actually a chair which the artist invites you to sit on and discover all its fantastical elements.

Serendipitously we caught a performance of Papantla Flyers, a 1,500-year-old religious ceremony. The ritual is kept alive by being performed for tourists. A 90-foot pole with a 9-foot platform at the top is secured in the sand. Climbing the rungs of the pole are four traditionally costumed dancers representing the four directions and the four elements of air, earth, fire, and water, plus an Indian priest.

The priest faces each direction and plays his flute and drum to the “God of the Sun” to ensure fertility and a good harvest for the people. When his prayers are concluded the four dancers thrust themselves backward off the platform, secured by ropes around their ankles. They “dance in the air,” making exactly 13 circles around the pole hanging upside down until they reach the ground. The number is significant as 13 times 4 equals 52, the time-span of the pre-Hispanic cosmic cycle that ends when a new sun is born and life begins anew.

When Hollywood came to town

Eventually we turned from the sea and walked inward toward what is referred to as the Cathedral of Guadalupe, but without a bishop it is in reality a local church. From there it is a steep walk up the hill to Casa Kimberly, the former home of two of Puerto Vallarta’s most famous residents and now a luxury hotel with one of the most popular restaurants in town.

Just about everyone is familiar with the story of John Huston falling in love with Puerto Vallarta and bringing the Hollywood elite here for filming “The Night of the Iguana” with Richard Burton and Ava Gardner in 1963. Back then, the small sparsely populated village was mostly home to alligators, iguanas, and mosquitoes.

Burton purchased Casa Kimberly for a hideaway where he and his inamorata, Elizabeth Taylor, could pursue their love affair. They also bought the villa across the street for her and her entourage. The famous bridge that connects the two properties, allowing the lovers to meet without crossing the street, was built by local architect Giullermo Wulff. Wulff was largely responsible for convincing Huston to film in Puerto Vallarta, which contributed to the area becoming a haven for artists as well as making it a tourism metropolis.

Descending from the hills, we passed the open air artist’s mall and the statue of Huston in his director’s chair, and re-entered the centre of the town with its famous beaches and water activities. We ended our walk on the south end of the Malecón at Los Arcos (The Arches), a seaside amphitheatre built for public performance art and activities.

Dinner in the Sky: www.dinnerinthesky.com.mx


Barbara Angelakis is a seasoned international traveller and award-winning writer based in the New York City area. To read more of her articles and adventures visit LuxuryWeb Magazine at www.luxuryweb.com