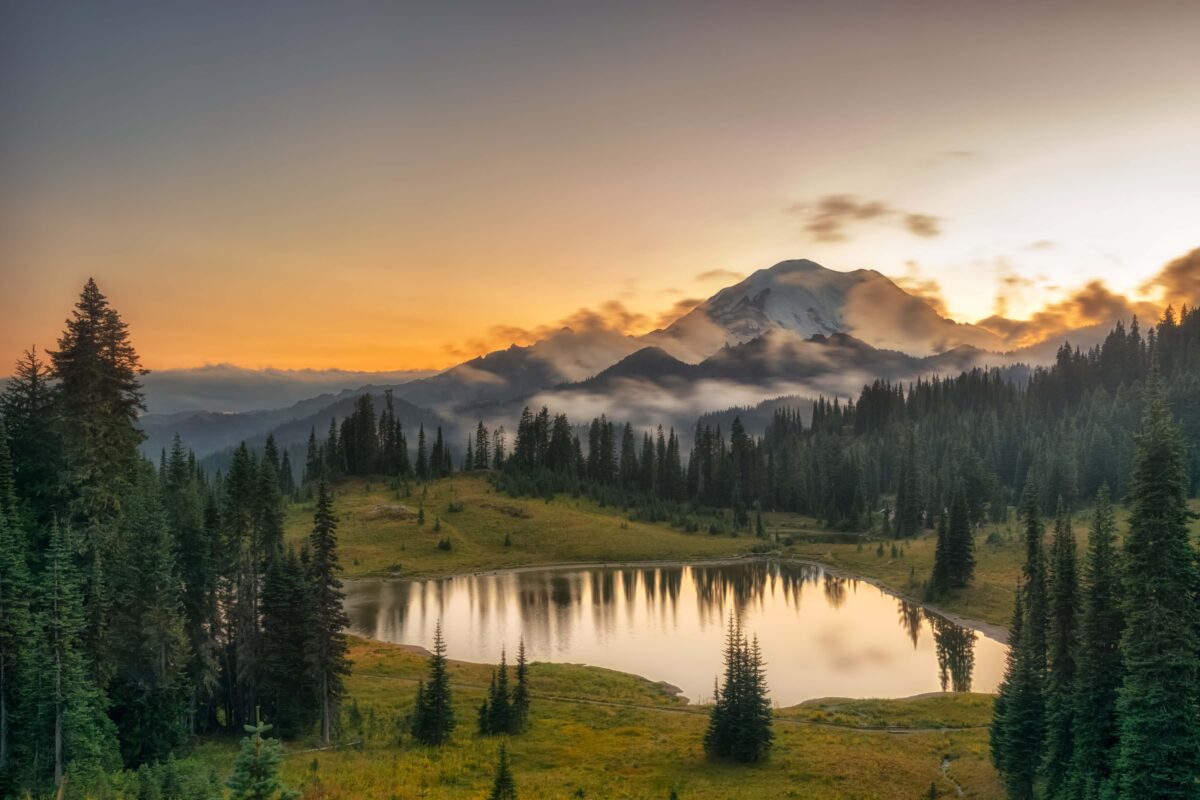 Exploring Mount Rainier, a National Park That Exemplifies the Power of Nature’s Dichotomy

A volcanic paradise in the clouds
BY Jeff Perkin TIMEMay 31, 2022 PRINT

“The most luxuriant and the most extravagantly beautiful of all the alpine gardens I ever beheld in all my mountain-top wanderings.”
—John Muir

Towering over the surrounding landscape like an earthbound deity, Mount Rainier in Washington state simultaneously possesses the power for bountiful creation and extreme destruction. With over two dozen glaciers on its nearly 3-mile-high peak, the water gathered by the mountain is the source of five major rivers that continuously fuel life on the slopes and land below. From sub-alpine meadows to ancient forests, the mountain is home to hundreds of species of flora and fauna. The beauty and peace found climbing up the mountain’s solitude earned an area of the park the name “Paradise” in the early 20th century. However, as the largest active volcano in the Cascade Mountain range, Mount Rainier has the potential to take away much of what it has given. Scientists and park enthusiasts keep a watchful eye on the perennial gifts and threats that this magnificent mountain provides to growing population centers of the Seattle region.

Hiking above the clouds on this natural wonder, around 2 million annual visitors marvel at the myriad colors and abundant life that combine to make this destination uniquely attractive. Streams peacefully flow through the mountain’s verdantly green meadows as plump marmots busily chew on purple, broadleaf lupine flowers that sway subtly in the breeze. Winding trails climb through the meadow with wooden steps looking like a stairway to heaven. In the distance, above the vibrant green are bright blue sky, white clouds, and Mount Rainier’s weathered summit, 14,410 feet above sea level.

Known as Tahoma or Tacoma to Native American tribes, these names mean “the place where water begins” or “the source of nourishment.” For thousands of years, tribes in the area would climb the mountain to gather food and medicinal plants and to hunt. The mountain continues to be a venerated place of spiritual significance for the descendants of these tribes. The Mount Rainier area was home to six major tribes, including the Nisqually, Cowlitz, Puyallup, Squaxin, Muckleshoot, and Yakama. Some local towns and places are named after the tribes that maintain a connection to this sacred place.

The very popular, sub-alpine meadow known today as “Paradise” is 5,000 feet up the mountain. Its rich plant and animal life enticed Native American tribes up its slopes for thousands of years and continues to attract people from all over the world today. Historic Paradise Inn was built in 1916 and since then has been forced to endure extreme snowfall that famously forms a wall of snow around its exterior in the winter. Roads are cleared year-round so that visitors can enjoy Paradise’s wildflowers in summer or its white wonderland in winter. Called the “bringer of rain,” Mount Rainier makes its own clouds, which can shield it from view for weeks on end.

Mount Rainier was established as the fifth National Park in 1899. As with other parks, John Muir and the Sierra Club lobbied for several years alongside other conservation groups, railroad companies, scientists, and business interests who all had a desire to see Mount Rainier enter the National Park system. Muir hiked to the summit, gave lectures, and wrote articles advocating for the conservation of Mount Rainier. Before that time, the mountain had already received its current name when, in 1792, Captain George Vancouver of the British Royal Navy named the mountain after his friend, Rear Admiral Peter Rainier. Interestingly, Rainier never once set foot on the mountain or even in the western United States.

Mount Rainier National Park was an instantly popular destination with tens of thousands of visitors coming annually just a few years after its opening. This was due to the fact that it was the first national park to allow cars. In the years that followed its opening, the park service had difficulty keeping up demand for roads and lodging. President Roosevelt’s New Deal brought over 1,000 Civilian Conservation Corpsmen to work on the mountain. By the 1930s, all of the roads in the park had been built or surveyed, and by the 1960s, Mount Rainier was hosting over 1.5 million visitors every year. In 1988, the Washington Wilderness Act designated 98 percent of the park as wilderness, which allowed for more protection against future development.

The first recorded climb to Mount Rainier’s summit was achieved by P.B. Van Trump and his friend General Hazard Stevens in 1870. In the years since, tens of thousands of people have made the climb, and many were seriously injured or killed in the process. Thousands of people attempt the 9,000-foot, 8-mile climb every year, though it is said that less than half reach the summit.

In the early days of the park, visitors caused serious damage to meadows and wildlife by freely walking wherever they pleased. This unnecessary destruction led to the creation and enforcement of designated trails by the park service. Desperation during the Great Depression led to decisions that seem uncharacteristic of the National Park system. The Paradise area became home to a nine-hole golf course in the 1930s. The golf course was only open two to three months of the year due to snow, and before long it was closed because it was unprofitable. Visible scars were left on the land for decades—a lesson learned in conservation history.

According to geologist Thomas W. Sisson of the United States Geological Survey (USGS), “there is nothing to suggest that volcanic activity has ended at Mount Rainier. Mount Rainier will surely erupt again, and this will affect people who live in the surrounding areas or who visit Mount Rainier National Park.” Mount Rainier is classified as a stratovolcano, which means it is episodically active. The last time the volcano is thought to have erupted was in the 1840s, although it seems that a definitive date was not recorded.

Towering over 3.7 million people in the Seattle–Tacoma area, there is immense incentive to closely monitor the mountain’s volcanic activity. Much of the threat to surrounding civilization is the potential for large debris flows that would result from the mass melting of snow and glacial ice. Called lahars, these debris flows would have the potential to violently rush down river valleys all the way to Puget Sound. Nearly 100,000 people live in the immediate danger zone of lahars, while damage to infrastructure, waterways, and surrounding life would create serious long-term impacts. Sisson claims that these mudflows would have the “consistency of churning wet concrete.” Lowlands around Tacoma and Seattle are formed of this kind of prehistoric debris: evidence of Mount Rainier’s dramatic past. As recently as this year, expanded efforts have been made to improve the lahar detection system by the Cascades Volcano Observatory.

Volcanic gases and hydrothermal activity are evidence that Mount Rainier is still an active volcano. Earthquake activity is constantly being analyzed because, as Sisson explains, “experience at other volcanoes indicates that renewed eruptions will likely be preceded by weeks or months of small earthquakes centered beneath the volcano. These earthquakes can be accompanied by swelling or other changes in the shape of the volcano, as well as changes in ground temperatures and the amount and type of gas released from the volcano.” Eruptions aren’t the only threat because, as the USGS explains, lahars can even occur by “sector collapse or magma-water-ice interaction rather than from an eruption itself.” An expanded understanding of how these natural disasters unfold helps improve the early warning detection system for people who live in close proximity to the volcano.

It seems that an eruption at Mount Rainier, a pyroclastic flow, or a destructive lahar event is not a question of if, but when. Until that time, the mountain will remain poised in its relatively peaceful power as a beautiful backdrop to a growing metropolis and a mighty peak in the National Park system.