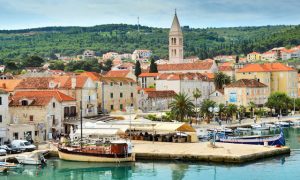 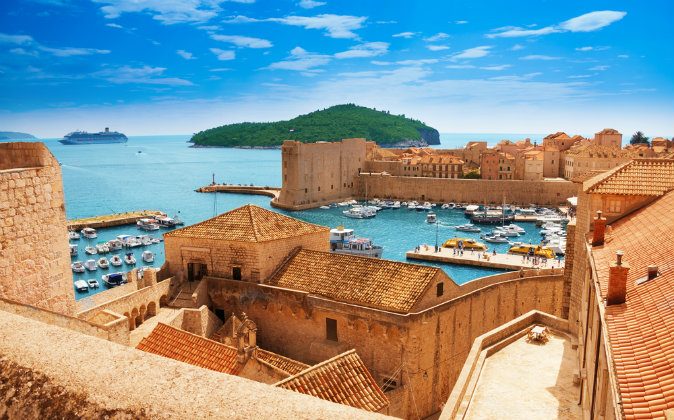 Port of Dubrovnik from the old city walls via Shutterstock*
Destinations

Croatia’s stunning Dalmatian coastline makes for a top cruise destination – you only have to look at a few photographs to see why. When it comes to choosing a company to go with you’re spoilt for choice; there’s everything from smaller bespoke cruises to large-scale luxury liners. Once on board, sit back, enjoy the view and look out for the following hot spots for a day excursion or two.

Sailing into Dubrovnik’s stunning port, you may feel like you have been there before, particularly if you have been watching the popular ‘Game of Thrones’ TV series. This medieval city provided the backdrop for the fictional city ‘Knot’s Landing’ and it’s easy to see why it was chosen. Surrounded by imposing 13th century walls, inside the city is a labyrinth of marble streets and baroque-style architecture. If you want to discover some of Dubrovnik’s rich history, pay a visit to the Dominican Monastery and Museum, or take the cable car from the north of the city walls right up to Mt Srd for a fantastic bird’s eye view. If you’re feeling really adventurous, a snorkelling or sea-kayaking tour is one of the best ways to see Dubrovnik in its entirety, as well as letting you explore the impressive aquatic world that lies beneath.

Split is a bustling Croatian city and the main port of call for onward travel. Here you’ll get a good flavour of everyday Croatian life, but there’s still plenty for culture vultures. Begin at the Diocletian Palace, an imposing roman, UNESCO listed site which directly faces the harbour. Take a guided walking tour to make sure you don’t miss the highlights, including Peristyle Square, the Temple of St Jupiter and the Cathedral of St Duje. The shops, bars and restaurants along the city walls are great places to stop for souvenirs and sample the local cuisine. No visit to Split would be complete without sampling a traditional platter of pršut (home-cured ham) and paški sir, a strong, hard Croatian cheese.

Located 160km along the coast from Split, Zadar again is a Croatian city steeped in history. The Old Town is full of roman ruins and medieval architecture, but Zadar is also the perfect place to relax and do some well-earned sunbathing at the beach resorts of Kolovare, Borik, or Vitrenjak. A key highlight for tourists is Split’s unique Sea Organ and Sun Salutation. Positioned at the harbour, the man-made sea organ has 35 pipes which create a musical soundscape, while the Sun Salutation – a 22 meter wide circular glass mosaic – provides an impressive light display to accompany it. Apparently this unique installation also sources enough energy to power all of the harbour’s lights – definitely worth seeing.

Exploring Croatia by sea is one of the best ways to see this unique country. Whether it’s a discovery cruise or a slower-paced jaunt around the coast and the islands, after a hard day’s sightseeing, head back to the deck to put your feet, process the day’s offerings and look forward to the next day’s adventure.