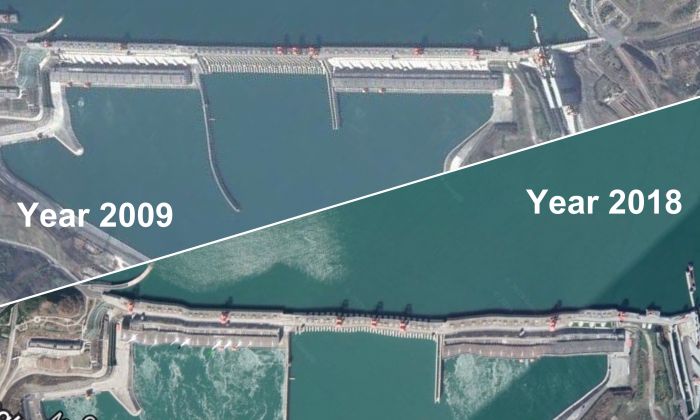 The structural integrity of China’s Three Gorges Dam being in danger has been the focus of netizen debate recently.

The hydropower gravity dam began construction in 1994 and was completed in 2009. Spanning the Yangtze River in southwestern China, the project required 129 nearby cities to be flooded and more than 1.2 million people to be relocated.

Netizens recently began circulating satellite imagery of the dam captured from Google Earth, where one can clearly see that the dam is deformed.

On July 8, the dam’s state-owned operator addressed the concerns in a statement, saying that the dam was safe. But since July 5, the company has closed off the dam from visiting tourists, making Chinese netizens nervous.

More than 30 million people live upstream from the dam, while more than 20 million live downstream.

Wang Weiluo, a German-Chinese hydraulic engineer, has studied Three Gorges Dam for decades. In a July 8 analysis published on Yibao, a Chinese website for current affairs commentary, Wang predicted that based on the current satellite images, the dam would not last longer than 50 years, which means it only has roughly 30 more years left.

“Someday in the future, the Three Gorges Dam will break,” Wang wrote. “The deformity will shorten the dam’s lifespan and weaken its safety.”

A Chinese independent economist who posts on Twitter under the pseudonym Leng Shan shared two satellite images side-by-side on June 30: one taken 10 years ago shows that the dam structure is in a straight line; the other, taken in 2018, shows the dam has slight curvatures.

Chinese state-run newspaper The Paper tried to quell the public fear with a July 2 interview with Cao Yi, the hub operation director in charge of drainage at the Three Gorges Dam.

“The Google satellite images aren’t photos that were taken directly by camera. They’re pictures that were made after calculating,” Cao told The Paper. “Google’s Three Gorges Dam terrain is often inaccurate because the coordinates that Google used have been processed.”

The Paper has since deleted the report, but many Chinese web portals retained their reposted versions.

Eventually, on July 8, the dam operator, the state-run China Three Gorges Corporation, admitted via posts on its official Weibo and WeChat accounts that there was a deformity, but the dam was safe because the deformity was within safety margins. Weibo and Wechat are popular social media platforms.

The Chinese regime had plans to build the Three Gorges Dam since the 1950s, but faced resistance from experts who warned about the potential negative impact on the environment.

Wang Weiluo, the German engineer said in his recent analysis why the dam’s safety is in danger.

“The 2,309.47-meter (5,577 feet) long Three Gorges Dam is composed of dozens of concrete blocks. The blocks are connected with each other but are not connected to the bedrock,” Wang wrote.

“That means that the Three Gorges Dam has been moving since day one,” Wang wrote.

He explained why the images showed the dam having curvatures. “While some blocks moved toward the upstream direction due to the force of the water, others were moved toward downstream. But the vertical and horizontal movements are not at the same levels,” Wang wrote.

He added that erosion due to rain also contributed to the deformity.

Liu Chongxi, a top concrete dam expert in China, pointed out in an article published back in 1994 in the official newspaper of the state-run Yangtze River Academy Of Sciences that the Three Gorges Dam could only be used for about 50 years. Wang said that Chinese academia generally have the same opinion.

Wang analyzed all recently published satellite pictures released by Chinese state-run media—which showed the dam from different angles than Google Earth—and said: “These photos cannot certify that the dam was not deformed.”