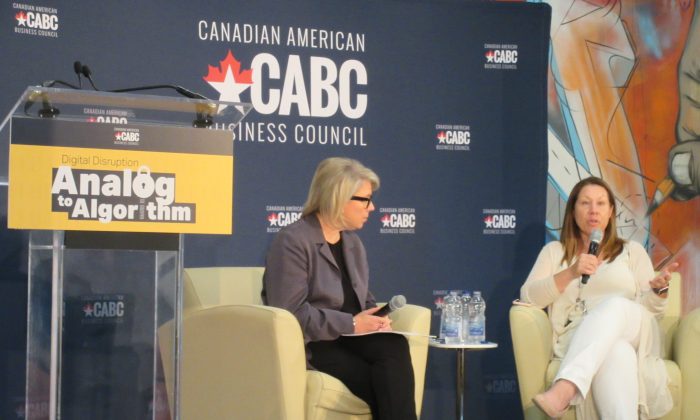 Scotty Greenwood, CEO of the Canadian American Business Council (L), and Lena Trudeau of Nuage Strategies discuss ideas on the modernization of NAFTA to address the digital economy, at Bayview Yards in Ottawa on June 6, 2018. (Rahul Vaidyanath/The Epoch Times)
Companies

OTTAWA—Business leaders explored how digital disruption is changing companies, government, and people in the context of NAFTA modernization at a one-day conference in Ottawa on June 6.

But in an increasingly data-driven world, the human quality and its need for privacy, security, and convenience cannot be forgotten, according to the panellists at “Digital Disruption—Analog to Algorithm,” held at the Bayview Yards innovation centre.

As trade tensions heat up between Canada and the United States, the business experts voiced a preference for multilateral trade agreements as opposed to bilateral ones.

In multilateral negotiations, it’s not about winning and losing; rather it’s about the strengths and weaknesses, said Batstone.

“The nature of the negotiation for trilateral or multilateral is fundamentally different from bilateral,” he said, arguing that in a perfect world, there would be a single worldwide trade agreement, and each time it is segmented, a little bit of what is possible would be sacrificed.

“Are we going to work separately, or join together in North America? We should be concerned about China,” said Scotty Greenwood, CEO of the Canadian American Business Council (CABC).

Canada is, of course, inextricably linked to the United States, and the modernization of NAFTA to serve the needs of the digital economy is stalling as the fortunes of the agreement wane.

“NAFTA modernization is paused if not dead,” said Greenwood.

The CABC’s work focused on what a digital chapter in NAFTA should look like, with help from Lena Trudeau of Nuage Strategies. But it may be all for naught.

“The [U.S.] congressional deadline to approve the modernized NAFTA has now passed,” Greenwood said. She added that negotiations for “something smaller” will continue behind the scenes, but the opportunity to get Canada, the United States, and Mexico to agree on a new digital chapter is over from a legislative point of view in Washington.

“We have to find another way to bring some of this harmonization,” said Trudeau. “How to not just enable, but really promote, the growth of the digital economy in North America.”

Like the old Auto Pact, Greenwood suggested that a 2018 “Digital Pact” might be needed. Trudeau said she liked that idea.

One area NAFTA has to address is data residency and sovereignty. Having a freer flow of data is something the tech community has pushed for.

“Physical location of your data does not guarantee the privacy and security of your data,” Trudeau said, since data flows through the United States in any case due to the way networks work.

It takes the government a long time to adopt technologies, however, said Trudeau.

From her perspective, the problem is the government mentality of “a view different from the status quo is the risk.” Government, like business, can’t stand still in the way it delivers services and in its understanding of the changing landscape.

The pace with which consumers embrace digital change has quickened. In a presentation given by Sukhmani Dev, vice president of digital solutions at MasterCard, Canada was shown to be very advanced in its adoption of digital technology. Over 80 percent of Canadians carry a smartphone; after Australia, Canada is the next most “mobile-ready” country.

An up-to-date agreement would be an opportunity to be responsive to citizens about their data concerns. And governments using modern tools may change their regulatory approaches for the better.

But in the end, regardless of technological change or digital disruption, it all comes down people and their judgment.