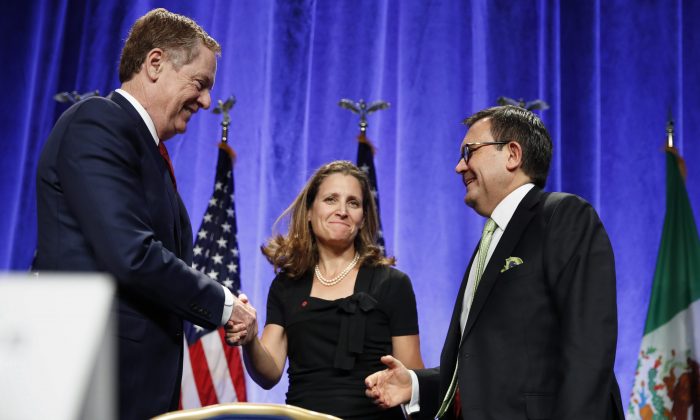 Canada’s tech ecosystem will benefit from a long-overdue revamping of the North American Free Trade Agreement (NAFTA), though some thorny and complex issues need to be resolved.

“Modernize in accordance with technological revolution” is Canada’s first core objective for the NAFTA renegotiations, which began in Washington, D.C., on Aug. 16, as outlined by Foreign Affairs Minister Chrystia Freeland.

In the early 1990s, as the first iteration of NAFTA was being negotiated, the internet was virtually non-existent. Tremendous technological change began taking place in the mid-1990s, and then came mobile computing with the iPhone in 2007. Needless to say, 23-year-old NAFTA has a lot of catching up to do to account for the growth in the digital economy.

When it comes to North American trade, issues like supply management, auto manufacturing, and softwood lumber dominate the headlines, but it’s the service industry that accounts for 56 percent of Canada’s exports to the United States and represents more than 70 percent of the Canadian economy.

Within the service industry lies Canada’s burgeoning tech sector, which has extensive multi-layered relations with the United States.

Tech companies are nimble by nature. Certainly, they haven’t displayed the concerns that the agricultural or some manufactured goods sectors have over the NAFTA renegotiations.

Harrison did note that there have been more inquiries from clients on how the NAFTA renegotiations could impact e-commerce.

A potential chapter on the digital economy and worker mobility will provide clarity and benefit the tech ecosystem. That is something advocated by the Canadian Services Coalition (CSC) in its submission to Global Affairs Canada.

I think that Canada has a lot to gain in these negotiations.
— Martha Harrison, partner, Dentons Canada LLP

Harrison said the recently negotiated Comprehensive Economic Trade Agreement (CETA) between Canada and the European Union will be leveraged by Ottawa for its tone, tenure, and subject matter when conducting negotiations.

“One of the benefits of CETA is a rigorous regulatory cooperation,” she said. This is critical when modernizing trade agreements so that companies can take advantage of the rules of origin for a product and import and export it on a duty-free basis without having to make significant changes to it.

Rules of origin are needed to determine if a good is brought in duty-free. The principle becomes more difficult to apply in the digital economy with software transferring across borders via the internet.

“They’re going to have to wrap their heads around that because that is an important part of what this agreement should be attacking,” Scott Smith, director of intellectual property and innovation policy at the Canadian Chamber of Commerce, said in a phone interview.

Worker mobility is critical for the success of the digital economy and is another of the major initiatives expected to revitalize NAFTA. The first step is to recognize the types of jobs that have emerged since the internet revolution.

For example, the job of programmer is not recognized under the existing list of “professionals” in the current agreement.

“Canada has been rather vocal that it needs to expand that list to keep up with new and innovative industries,” Harrison said.

Instead, rapidly growing tech companies like EventMobi have had to hire consultants and overseas talent.

“What we would have liked NAFTA to have had—allow us to bring in programmers, engineers. Unfortunately NAFTA does not allow us to bring those in,” said Shaida Ghani, operations manager at EventMobi, in a phone interview.

EventMobi and other tech startups have been making use of the government’s Global Skills Strategy program to hire highly skilled individuals with a very quick turnaround time.

“The ‘express entry’ program that exists here now is only a step towards what our tech companies actually need,” Smith said.

In a free trade agreement, goods and labor should flow freely across borders; so too should data. Large U.S. tech companies along with the CSC and the Canadian Chamber of Commerce are pushing for the free flow of data, but some Canadian provinces as well as the Income Tax Act require domestic storage of certain types of data—that is, it can’t be stored in the cloud hosted by international servers.

It’s become an advantage to some Canadian fintech and legaltech companies with their customers if they can say they store data domestically.

“If the cross-border data flows are unrestricted in a way that the United States would like them to be, there may be strong pushback from the Canadian side,” Mat Goldstein, a business lawyer in Dentons’ Corporate and Venture Technology and Emerging Growth Companies group, said on a conference call.

The provinces of British Columbia and Nova Scotia require storage of personal information in Canada, but whatever Ottawa negotiates will be binding on the provinces, said Harrison.

The Trans-Pacific Partnership (TPP), which could also influence the renegotiations, provided for the free flow of information unless there are serious privacy concerns. “That’s going to be the big negotiating point—what is considered sensitive,” Smith said.

The United States is actually seeking stronger commitments on e-commerce and data flows than what was agreed to in the TPP. Should Canada and Mexico agree, they may need to amend their legal frameworks.

There’s no question NAFTA has been a boon to the Canadian economy and should continue to go forward. But beneath the surface, there will likely be winners and losers. The Canadian service industry must face greater competition to gain greater market access—a double-edged sword.

“I think that Canada has a lot to gain in these negotiations,” Harrison said.

In her address on Aug. 14, Freeland said NAFTA needs to be revamped “in a way that ensures we continue to have a vibrant and internationally competitive technology sector and that all sectors of our economy can reap the full benefits of the digital revolution.”