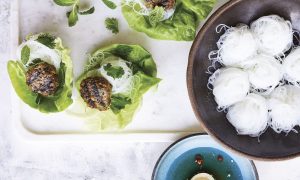 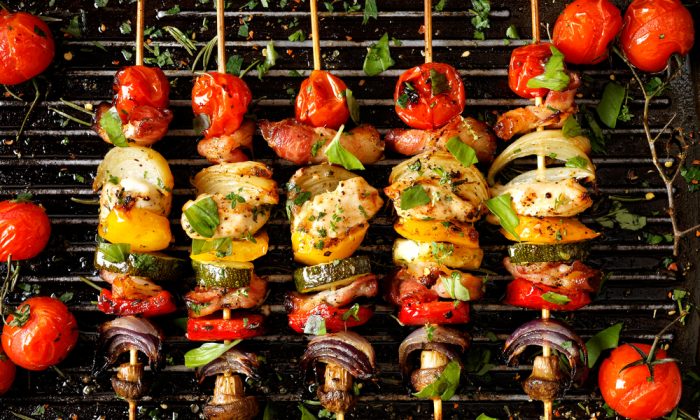 Vegetable skewers are a fresh and healthy option for the grill. (Shutterstock)
Food & Dining

The Fourth of July holiday is the nation’s most popular day to fire up the grill for a cookout. Grilling is a healthy cooking option, and most foods take well to the grill.

But as with any flame-cooking method, there are safety precautions to consider, and it takes an understanding of how heat and meat work together to achieve on-the-grill perfection. Here are some expert tips for healthy, safe, and delicious grilling this summer.

Choose leaner cuts of meat and poultry, such as pork loin, flank steak, lean ground beef or turkey, and white meat chicken breast (skinless is healthiest). On packaging, look for terms such as “hormone-free” or “antibiotic-free,” and specifically for beef, “grass-fed” or “pasture-raised.”

Healthier options to grill include fish or vegetables. For fish, choose wild-caught over farmed when possible; SeafoodWatch is a handy guide for learning about the most sustainable choices. Select firmer fish such as salmon, swordfish, tuna, and halibut, which will hold up better on the grill.

Buy organic produce whenever possible, and look for fresh vegetables that are easy to slice and skewer. Meatier grilled portobello mushrooms, cauliflower steak, and eggplant can take center plate for vegetarians and vegans; while skewers of grilled pineapple, peaches, and firm bananas make for a healthy dessert.

Brush up on your food safety knowledge

According to the nonprofit Stop Food-borne Illness, each year, an estimated 48 million people in the United States experience a food-borne illness caused by harmful bacteria, parasites, chemicals, or viruses in food. The organization shared several food safety tips to reduce your risks:

Meat, poultry, and other perishables should be the last items in your grocery cart and the first placed in your refrigerator or freezer. On hot days, bring a cooler filled with ice to keep items chilled on the drive home.

To avoid cross-contamination, keep raw meats and poultry in separate containers and away from other items, and use separate cutting boards for prep. Remember to wash your hands with soap and water, and thoroughly clean all utensils, platters, boards, and prep areas before and after handling both uncooked and cooked food.

Foods left out at room temperature are more likely to attract harmful bacteria. Remember the two-hour rule: When the temperature is below 90 degrees F, discard food left out for two or more hours; when it’s hotter than 90 degrees F, consume foods within one hour. When in doubt, throw it out.

At a cookout, keep a separate cooler just for beverages, which will be opened frequently, and limit the times the food cooler is opened. Keep it out of the sun, covered, and refilled with ice as needed.

Get smart with your seasonings

Make homemade rubs and marinades that you can store, rather than buying packaged versions, which may contain more sodium, sugar, additives, and preservatives.

Elizabeth Karmel, founder of the grilling education website “Girls at the Grill,” takes a simple approach to seasoning with what she calls her signature “holy grilling trilogy:” olive oil, kosher or sea salt, and freshly ground pepper. “It offers flavor without the flourish,” she said.

Then, “season like you mean it,” writes grilling expert Jamie Purviance in his new cookbook, “Weber’s Ultimate Grilling.” “First, oil the food; then sprinkle generously with salt, pepper, and/or other seasonings, from edge to edge and on all sides.”

If your gas grill has been sitting unused for months, Lindars suggests checking the tank for any perforations by rubbing soapy water over it. If you notice bubbles forming on any part, it may need replacing. Have your grill professionally inspected if it isn’t lighting properly or emits a gas odor.

Be sure to clean the grate, which is important for food safety, and will help prevent food from sticking and enable more even browning. Purviance recommends investing in a sturdy, long-handled grill brush with stainless steel bristles. Thoroughly scrape the grill while it’s still hot, either before or just after use and every time you cook.

If cooking on a charcoal grill, Purviance suggests arming yourself with two long, metal tongs: one pair for arranging the coals and the other to handle the food.

Karmel also keeps separate grill tongs for raw and cooked food, and color-codes them with duct tape to avoid cross-contamination: “I use the [universal] colors of red (stop) and green (go) to make it easy to remember which tongs to use while cooking and which tongs to use once the food is done,” she said.

Reduce the risk of harmful carcinogens

While grilling can be a healthier way to cook, the American Institute for Cancer Research (AICR) still advises caution: “When meat is exposed to high heat, chemicals form that lab studies show can damage DNA—a potential risk for cancer,” said Alice Bender, director of nutrition programs for AICR. “If you choose to grill, limit red and processed meats, both of which link to colorectal cancer.”

If grilling meats, including poultry, marinating them first for at least 30 minutes can help reduce formation of cancer-causing compounds, Bender said. She suggested cooking the food at a lower grilling temperature and away from direct flame, or pre-cooking them to reduce time on the grill. Pre-cook right before you add the food item to the grill, and not ahead of time, to reduce any risk for contamination.

‘Match the heat to the meat’

Another tip from Purviance is to allow enough room on the grill for both direct and indirect cooking, in case you need to move items quickly. “Packing too much food on the grill restricts your ability to be nimble and responsive.”

Have patience—and a food thermometer

Resist poking, prodding, and peeking while your food cooks. To maintain even temperatures and draw out aromas and flavors, minimize opening the grill lid and poking or turning food too frequently.

However, take action if flames need controlling to avoid burning your food, or if there’s too much dark, dense smoke. Purviance notes that mild flare-ups can occur when too much fat or oxygen is at the heat source, and usually die down after closing the lid. Elizabeth Karmel cautions in her “ABC’s of Grilling” to never use water to extinguish a flare-up, which can intensify the flames. Baking soda can be effective in suppressing them.

If you are concerned about burning your food, move the items off the direct heat. Still, keep a timer nearby so you don’t overcook them.

Stop Food-borne Illness recommends using a food thermometer to judge doneness, rather than relying on smell, color, or taste. The Centers for Disease Control and Prevention recommends cooking ground meat to a safe internal temperature of 160 degrees F; larger cuts of meat, pork, lamb, and veal, as well as fish to 145 degrees F; and poultry and pre-cooked meats, such as hot dogs, to 165 degrees F.