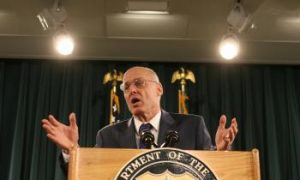 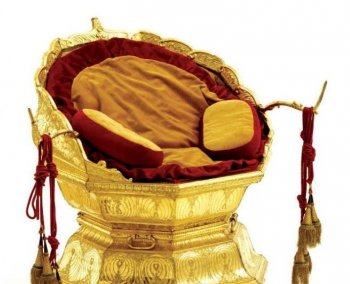 By Lisanthi Caldera
Print
TORONTO—The Maharaja: The Splendour of India’s Royal Courts exhibition at the Art Gallery of Ontario transports viewers to the beginning of the eighteenth century and into the world of the Maharajas of India.

Over 200 artifacts related to the opulent lives of the Maharaja, which means “great king” in the ancient Indian language of Sanskrit, are on display, assembled from private and public collections from India and Britain. These beautiful treasures include furniture, jewellery, royal costumes, ceremonial weapons, decorative art, and paintings. The exhibit even includes a custom built saffron-coloured Rolls Royce and a life-sized model elephant decked in fabrics.

The artifacts also tell the story of British influence on Indian life from the early eighteenth century to the mid-twentieth century. The golden throne is a good example of how the Maharaja’s life was influenced by British customs in the early nineteenth century.

The golden throne belonged to Maharaja Ranjit Singh, who was crowned Maharaja on 12 April 1801 in what is modern day Pakistan. The throne is octagonal in shape and covered in gold with a lotus flower pattern on the base. The lotus flower is a symbol of purity, blossoming out of muddy water. The lotus flower also signifies the king’s connection to the divine.

India was once a furniture-free society, where people would sit on the floor on mats and richly embossed pillows. Due to British influence, the king commissioned a throne, which was a European royal tradition. Maharaja Ranjit Singh died in 1839, after ruling for almost 40 years. The king’s body was cremated in an open pyre as was the custom in India. His queen committed sati, a Hindu practice of immolation. She sat on her husband’s pyre, holding his head on her lap and was burned to ashes with her husband and his other wives. Though Maharaja Ranjit Singh is dead and gone, his magnificent throne survives on display at the AGO.

The AGO provides detailed explanations of the history behind the objects and some multimedia presentation. The gallery’s website also contains a wealth of information about the artifacts.

The Maharaja exhibition will continue until April 3 and is free for anyone under 25. Group and senior discounts are available.

The AGO is the second international destination and sole Canadian venue to host Maharaja: The Splendour of India’s Royal Courts. The exhibition originated at the V&A Museum in London, where it was on view from Oct. 10, 2009 to Jan. 10, 2010. Following its run at the AGO, the exhibition will visit The Asian Art Museum in San Francisco from Oct. 21, 2011 to April 8, 2012.