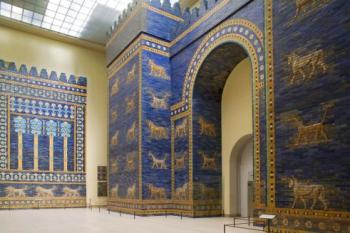 Babylon’s Ischtar door is one of the at least eight city gates of Babylon’s capital. It is on display at the Museum of the Ancient Near East. (Berlin Staatliche Museum/Maximilian Meisse )
Travel

Exhibition in Berlin—Babylon: Myth and Truth

Located on Museum Island, the Berlin Pergamon Museum is one of the most popular tourist museums in the city. Housed within is the exhibition “Babylon—Myth and Truth,” a world-community project.

Treasures owned by the Pergamon Museum as well as treasures on loan from other museums can be viewed in this exhibition, including pieces from the Louvre of Paris, the British Museum of London, and the Stattliche Museum of Berlin.

Visitors arrive in droves. Through the impressive anterior Ischtar door, they gaze down Babylon’s 30-meter-long (98 feet) procession avenue and begin their exploration into another world.

The theme of the first section is “Truth.” More than 800 cultural objects invite the visitor to experience Babylonian culture—one of the most renowned cultures of the old Orient.

The cultural objects are organized into 10 different topics, such as statues, reliefs, religious offerings, architectural pieces, Babylonian scriptures, and other artifacts of this ancient culture.

Upon entering the section entitled “Kingdom,” the visitor learns about Babylon’s rulers, starting with Hammurabi (1792–1750 B.C.), the sixth king of Babylon. After having ruled Babylon for 30 years, Hammurabi united a number of surrounding kingdoms through military campaigns and became the first king of the Babylonian Empire.

Hammurabi is perhaps best-known for the set of laws developed during his reign known as Hammurabi’s Code. This code, which put forward the principle, “an eye for an eye and a tooth for a tooth,” is the oldest and most complete code of laws from ancient times. It is displayed on a 2.25-meter-high column, with an eye-level copy conveniently placed for easy viewing.

Babylon rose to a powerful position in the old Orient through military campaigns. This section of the exhibit also presents historical information about some of the later Babylonian or Chaldean rulers.

Babylon’s written language encompassed 600 different hieroglyphs. They have survived in the form of cuneiform writing on clay tablets, rocks, and steles. The steles are upright stones or slabs with inscribed or sculptured surfaces.

Nearly 10 years of schooling were required for one to learn all 600 hieroglyphs, and very few Babylonians mastered them all.

Visitors can observe the evolution of Babylonian culture through an examination of the building structures. With an inner double wall, an outer wall circling the east bank, and a fortress in the northern part of the city, Babylon was the most protected city in antiquity.

With so many different types of buildings as well as other construction projects, the ancients could not agree which should be included in the wonders of the world.

Many of the buildings were dedicated to Marduk, considered the patron deity of Babylon. Though he was initially regarded as a minor city god, he was later revered as the highest god.

Many stories and works of art eulogized Marduk. The “Tower of Babel,” also known as the “Zikkurat of Etemenanki” was dedicated to him. Archeological excavation of the temple grounds in 1913 confirmed the existence of this tower.

Historically significant events discussed in the Bible are presented in the exhibition. Some are supported by the archeological evidence while others are not.

For example, the Biblical account of the Tower of Babel, though not completely supported, is found to be correct on some points.

The “Etemenanki” tower truly did exist. It was 92 meters high and was known as the tallest building of its time.

Also, according to research, the first traceable script was the Sumerian writing system, developed more than 5,000 years ago. The Sumerians are considered the ancestors of the Babylonians.

The second section of the exhibition is entitled “Myth.” Here, in part through the use of excerpts from the Bible, the exhibitors present the many beliefs and interpretations of the significance of the history of Babylon through the surviving art and culture of the time.

References such as the “Babylonian Jumble of Voices,” “Harlot Babylon,” “Babylon’s Gomorrah,” and the location of the apocalypse are presented and discussed. Because the understanding of the Biblical description of Babylon was often compared with the societal norms at a given time, there are many diverse interpretations of these terms.

Descendants of the black slaves in Jamaica and members of the Rastafarian movement find similarities between the Babylonian bondage of the Israelis, as described in the Bible, and the deportation of their African ancestors to America. When using the term, “Babylonian system,” they are pointing to corruption in the Western or “white” world.

This concept was spread through reggae music, and the term, “Babylonian system” has taken on the connotation of exploitation, suppression, decadence, materialism, consumption, status-seeking, corruption, selfishness, ignorance and hatred among humans, as well as concepts of racism and fascism.

There are nine sections in the second part of the exhibit. Videos and classical works of art present models of morality and debauchery, fiction and reality, hope and anxiety, and veneration and rebellion.

For example, the Tower of Babel represents arrogance and a path filled with sorrow and pain. Yet, at the same time, it also represents the search for knowledge, enlightenment, hope, and faith.

In other words, the symbolism of the Tower is a reminder that, when walking through the abyss, one should follow one’s conscience, set boundaries, and elevate oneself to a higher level. The Babylonian Exhibition thus addresses deeper aspects of the human experience.

The spectacular works of English painter and engraver, John Martin, (1789–1854), depict the concept of Babylon as that place where a human being confronts his inner conflicts and doubts—the drive to realize one’s desires vs. the recognition of the need for self-restraint.

In this view, Babylon has deep relevance for all of us when considered from an historical perspective. The thoughtful observer of this extraordinary exhibition can delve deeply into the paradox of Babylon to encounter fundamental insights and gain knowledge and strength.