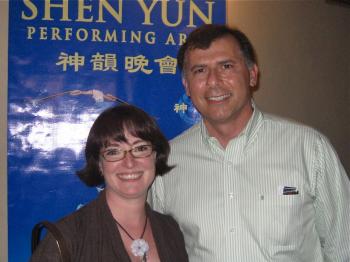 By Epoch Times Staff
Print
PASADENA, Calif.—Shen Yun Performing Arts New York Company was welcomed by Southern California cultural aficionados on April 28 at one of the most revered performance halls in the nation, the Pasadena Civic Center Auditorium.

Mitchell Matoian, executive director of Western Pistachio Association, and a colleague, Johanna White, were attending a statewide conference at the neighboring Pasadena Convention Center, when they learned about this evening's performance. "I was given a pamphlet and mentioned it to Johanna. She had wanted to see the show for a long time and so we came," Mr. Matoian said.

"I loved the mixture of spirituality with the [human rights] message. It was just a very fascinating way for me to learn about the Chinese culture."

A most memorable dance was Plum Blossom. Ms. White said, "The plum blossom dance was beautiful. … How it opens up and how it looks, and the way the blossom actually looks. It was done very, very well.

"I heard the commentator say that it was a sign of courage because it comes out when it’s still cold and wet outside. It’s one of the first things that blooms. … Since I work in agriculture, many times I see it myself when blossoms come out. It’s the first thing that comes out before the leaves."

Mr. Matioan was also enjoying the performance. He said, "Just fantastic. The costumes. The choreography pieces, the way they were able to combine the classical, the ballet, the acrobatics. I didn’t realize these all derived from Chinese culture for many thousands and thousands of years.

"I’d come to see the show again. It was really, really just that good."

At the closing of the performance, the entire cast were honored with a standing ovation.