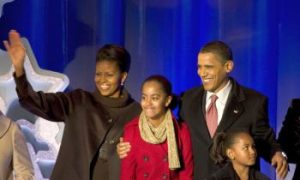 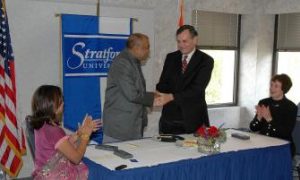 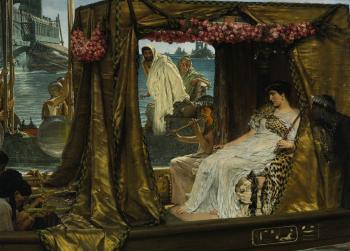 VICTORIAN MASTER: 'The Meeting of Antony and Cleopatra, 41 B. C.' by Sir Lawrence Alma-Tadema. (Courtesy of Sothebys)
Arts & Culture

By Nick Mclaughlin
Print
A masterpiece by artist Sir Lawrence Alma-Tadema (1836–1912), The Meeting of Antony and Cleopatra, 41 B. C. estimated between $3 million to $5 million, will be up for auction at the Sotheby’s sale of 19th Century European Art in New York on May 5.

Alma-Tadema was born in The Netherlands and lived for a time in Britain and Belgium. His art was greatly sought after by Victorian collectors and “was one of the most renowned painters of late nineteenth century Britain,” according to Vern G. Swanson's landmark biography.

His work was shunned after World War I and the emergence of modernism but is now seeing a rekindled appreciation.

The following is a detailed description from Sotheby’s of The Meeting of Antony and Cleopatra, 41 B. C.

Sir Lawrence Alma-Tadema draws inspiration from Shakespeare’s play in depicting the memory of Antony’s first encounter with Cleopatra. Beautifully rendered in the artist’s distinctive style, the image took on an iconic status soon after its completion in 1883, and has since served as inspiration for theatrical and filmed versions of the famed story.

In The Meeting of Antony and Cleopatra, 41 B.C., Alma-Tadema depicts one of the most storied moments in Roman-Egyptian history. Rather than using translations of ancient texts as source material, the artist instead draws inspiration for his composition from William Shakespeare’s Antony and Cleopatra, which was regularly staged in London’s theaters at the time.

Alma-Tadema chooses to depict a subtle and sensitive moment from a story filled with high-drama: the sensual memory of Antony’s first meeting with Cleopatra in Tarsus, proof that the Egyptian Queen was his true love.

Renowned for his expansive knowledge of ancient artifact, the chief sources for the objects that Alma-Tadema illustrates in The Meeting of Antony and Cleopatra, 41 B.C. appear to be either from the collections of European museums—where the artist spent countless hours—travels to ancient Greco-Roman sites, or from published surveys of Egyptian culture, art, and archaeology that served as source material for many artists.

For example, the barge gleams with gold inscriptions in Egyptian hieroglyphs that translate to “The (Female) Ruler,” with the name “Cleopatra” written in cartouche. The Queen herself lounges seductively on her throne, holding the traditional crook and flail of a pharaoh, rendered in carnelian and silver.

Soon after leaving Alma-Tadema’s studio, the artist’s interpretation of this “historical” meeting assumed an iconic status. It was published widely in world history books and later served as important inspiration for theatrical and filmed versions of this famous story, including the legendary 1963 movie starring the late Dame Elizabeth Taylor.