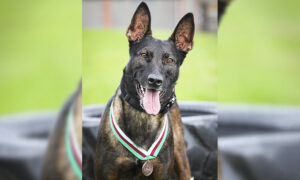 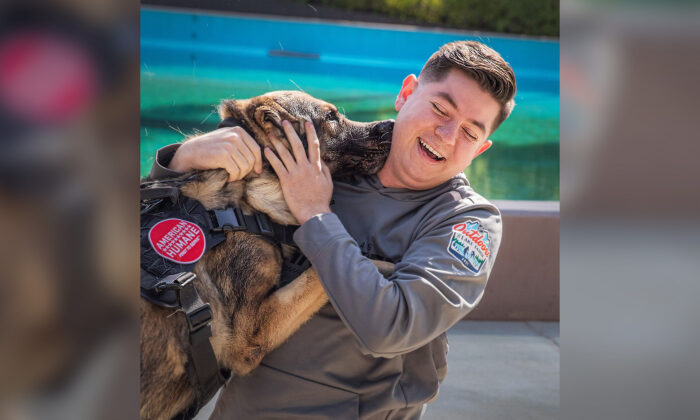 A former soldier of the U.S. Army was recently reunited in Las Vegas with the bomb-sniffing German shepherd that he worked with a few years ago.

Specialist Michael Steponovich, who left the Army for civilian life in January, had worked with the 7-year-old dog, Popeye, for 1 1/2 years as his handler while on active duty in South Korea.

However, the German shepherd was recently retired from service, and as per the 2016 congressional declaration that handlers ought to have priority for adoption, Michael got the chance.

With help from American Humane, a nonprofit that looks after the well-being of animals, and MGM Resorts International, Michael’s current employer, he was able to adopt the dog.

American Humane paid for the adoption and transport costs, in a bid to have Michael reunited with his old war buddy.

On his journey to Las Vegas, Popeye was accompanied by American Humane veterinarian Dr. Lesa Staubus to ensure his health and safety.

During the moment of the reunion, which took place at the Dolphin Habitat at the Mirage, Popeye was quick to recognize his former handler’s deep voice.

He ran into Michael’s open arms and threw his paws on his chest, nuzzling his face.

“It is always hard saying goodbye to a dog, especially in my job,” said Michael, Las Vegas Sun reported. “You don’t know if it is going to be the last time you are going to see him.”

Filled with joy, Michael expressed his gratitude to American Humane for helping reunite him with Popeye.

“This was incredible, it is so amazing to see so much support,” the former soldier said.

Michael and Popeye had spent more than 2,000 hours together in South Korea doing patrols and explosive detection—Popeye’s main area of training.

The duo had been separated for more than four months, and the reunion event, attended by Michael’s friends and co-workers, garnered plenty of satisfaction and smiles from all.

“Having him back in my life is going to be absolutely amazing,” Michael said. “I am so excited to just show him the area, take him on my adventures, and do stuff here in Vegas.”

Apart from facilitating ex-military dog adoption for their respective handlers, the nonprofit also provides free medical care for the dogs—due mostly to the health considerations from the extensive physical strain of military service.