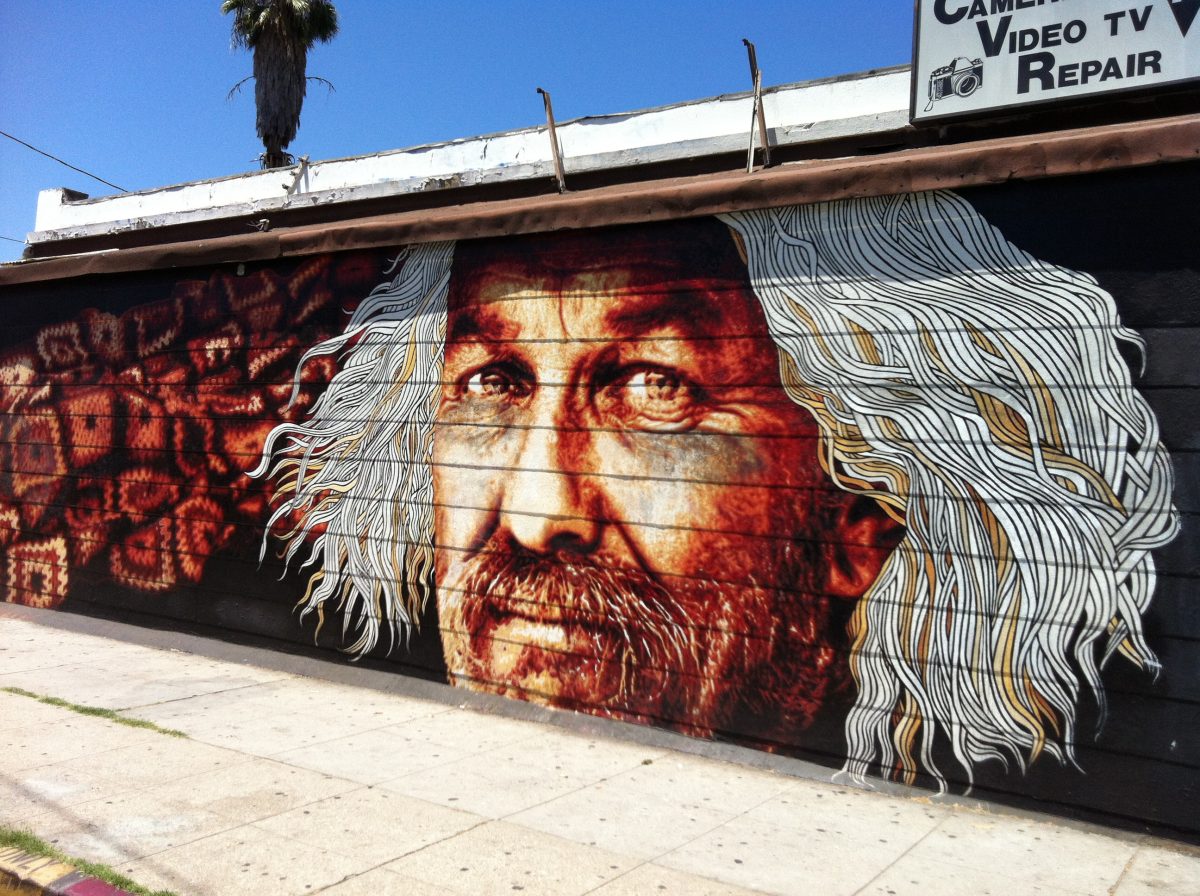 LOS ANGELES—A mural 125 feet by 150 feet on S. Los Angeles Street in downtown LA was almost painted over on July 14 after city officials said it had not been approved.

The mural was commissioned by indie pop band Foster the People in January to promote their new album “Supermodel,” which was released in March. The mural’s artwork is on the album’s cover.

A Foster the People fan started a Change.org petition to keep the mural, and almost 12,000 people signed it before the July 14 deadline. That, and a Los Angeles Times article, caught the attention of LA Mayor Eric Garcetti. He stepped in to “cool things off,” according to his office, and postponed the mural’s removal.

Mural Capital of the World

LA was once known as the “mural capital of the world.”

A surge in mural art that started in Mexico in the 1920s, spread to Southern California and other parts of the state, flourishing in the 1960s and ’70s. The free-spirited nature of the ’60s was kind to muralists, who often painted wherever they pleased. Fair weather and abundance of bare concrete helped establish the city as a haven for muralists.

The colorful artwork portrayed social and political issues affecting local communities, giving the growing yet marginalized Hispanic population a way to express itself.

Despite their renown, murals were banned by the city in 2002 after a group of billboard companies argued that murals were essentially advertisements. Though the ban was weakly and arbitrarily enforced, hundreds of murals were obliterated.

Artist Kent Twitchell was awarded $1.1 million in a 2008 lawsuit after his six-story mural “Ed Ruscha Monument” was painted over in 2006. The lawsuit was filed under the federal Visual Artists Rights Act, which prohibits the destruction of certain public artwork without giving the artist advance notice.

Mural aficionados, such as the founders of the Mural Conservancy of Los Angeles, campaigned to amend the city’s policy, and last October, the city passed a new ordinance allowing public murals again.

LA has a long way to go to regain its “Mural Capital” status however. Since the city ordinance was passed, only 3 new murals have been registered, 16 are pending, and 3 have been painted over after improper registration. Mural advocates said the application process needs to be improved.

Fred Cunningham, an employee at the Los Angeles Department of Water and Power, stopped by to view the downtown mural and share a picture of it with his daughter. He said he loves the city’s murals.

“I think there should be more of [them],” he said. “It turns the city into an art gallery.”

Some residents have argued that the mural is an advertisement for the band’s album. City regulations state a mural cannot advertise “a business conducted, services rendered, or goods produced or sold.” This means that, despite the mayor’s support for and advocacy of the mural, its future remains unknown.

“I thought I should take advantage [of seeing it] before they try to come back again and take down the mural,” said Joseph Galicia, a Foster the People fan who went to see the mural braving the high LA traffic caused by President Obama’s visit last Thursday.

The company managing the building, Cannon Management, said in an email it did not have any information on the mural and would not comment further.

Sarah Le
reporter
Follow
Sarah Le is a reporter and editor for The Epoch Times in Southern California. She covers important general interest news events and topics in the state of California and the United States. She lives with her husband and two children in Los Angeles.
SHARE
Friends Read FreeCopyFacebookTweet
You May Also Like