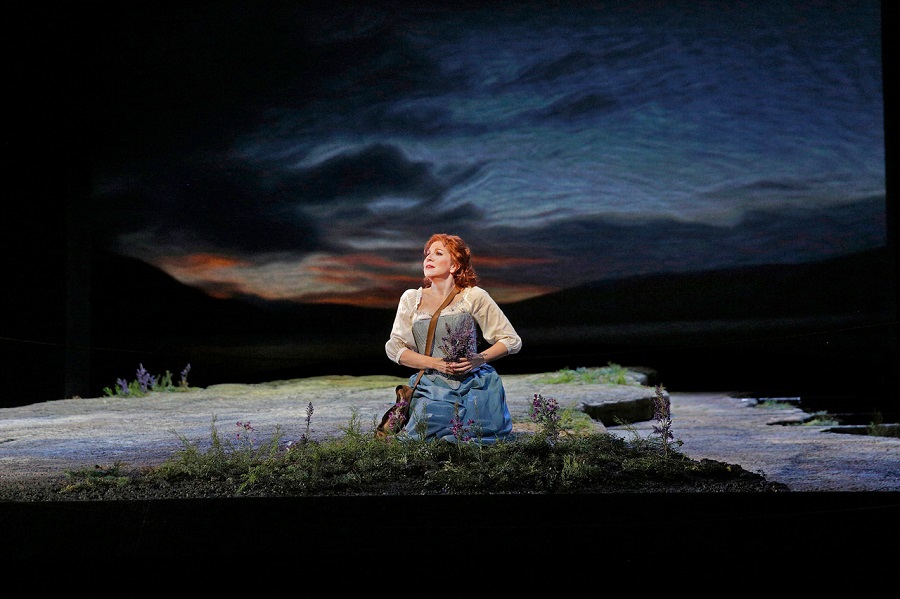 Hardly anyone reads Sir Walter Scott’s novels and poems anymore, but he inspired many movies (e.g., “Ivanhoe” and “Quentin Durward” in the 1950’s) and musical works, notably Donizetti’s “Lucia de Lammermoor.” His narrative poem, “The Lady of the Lake,” was adapted into a bel canto opera by Gioachino Rossini (1792-1868) that was popular for a time, but sank into obscurity.

Now, almost 200 years after its debut in Naples, “La donna del Lago” has been revived at the Metropolitan Opera. While the opera has some dull patches, it also features spectacular singing by perhaps the leading bel canto pair in opera today: mezzo-soprano Joyce DiDonato and tenor Juan Diego Florez.

Set in the Scottish highlands during the 16th century, the title character is Elena, an irresistible beauty. There’s a civil war going on but Giacomo (King James), posing as a hunter named Uberto, walks alone into enemy territory. He meets Elena and immediately falls in love. Unfortunately, the King has considerable competition.

Elena’s father, Duglas d’Angus (a member of the Highland Clan that wants to dethrone the King but also happens to be the ruler’s former tutor) orders her to marry the rebel leader Rodrigo di Dhu. However, she is enamored of another local suitor, Malcolm Groeme.

The war escalates but nevertheless Giacomo returns, to be rejected once again by Elena. He gives her a ring that he says comes from the King and will protect her from the royal army. Rodrigo overhears the conversation and orders his men to kill the stranger. However, Elena convinces the highlanders to spare Giacomo.

The King’s forces prevail in battle, killing Rodrigo and capturing Duglas. Elena goes to the castle to plead for his release as well as that of Malcolm, who she believes has also been taken by the enemy. Actually, Malcolm is not a prisoner but learns of Elena’s whereabouts and goes after her.

Displaying the ring secures Elena’s entry into the castle and she is shocked to discover that the lovelorn hunter Uberto is the King. The good-natured monarch pardons Duglas and Malcolm and allows Elena to marry the man of her choice.

The plot makes no more sense than the one the Marx Brothers poked fun at in “A Night at the Opera.” Paul Curran’s production has the singers mostly stand and deliver. Nevertheless, DiDonato not only sings beautifully but acts with feeling. She starts the first act with the lovely “O mattutini albori” and ends the opera with trills galore in “Tanti affetti.”

As Giacomo, Florez’s singing is impassioned and, with his matinee idol looks, one wonders how Elena could reject him. The rebel leader Rodrigo is another role for a tenor and John Osborn matches Florez in knocking out high notes even though he can’t match him in smoothness of projection. There are vocal fireworks when the tenors cross swords and exchange high Cs.

At first blush, Elena’s love interest seems to be a woman in a skirt, but according to the script is a man in a kilt. Malcolm is played by mezzo-soprano Daniela Barcellona, who also sang with style. Bass Oren Gradus was rather blustery as Duglas. The Met chorus and orchestra, conducted by Michele Mariotti, performed admirably.

The sets and costumes by Kevin Knight probably won’t inspire anyone to travel to Scotland. It’s pretty bleak until the last scene, set in the glittering castle.

If you like bel canto, then you won’t want to miss DiDonato and Florez in “La Donna del Lago.” The opera runs intermittently through March 14th at the Metropolitan Opera; 212-362-6000, metopera.org. The Live in HD performance will take place in theaters on March 14th at 12:55 p.m. ET. The U.S. Encore is set for Wednesday, March 18th at 6:30 p.m. local time.