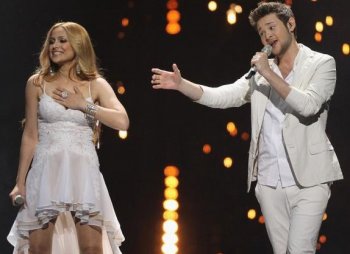 Ell and Nikki from Azerbaijan perform the winning piece in the grand finale of the Eurovision Song Contest 2011 in Dusseldorf, Germany. They beat out favorites such as Moldova, Jedward, and Blue. (Sean Gallup/Getty Images)
Arts & Culture

BY Stephen Summer TIMEMay 14, 2011 PRINT
Eli and Nikki from Azerbaijan took home the coveted Eurovision Song Contest 2011 final prize, beating out other European singers and bands such as Moldova and Blue.

The finals for the much-anticipated European talent show, Eurovision, ended in Dusseldorf, Germany on Saturday, featuring singers from all over Europe who were aiming to take home the crown for the popular competition.

The massive European talent competition was held in one of Germany's largest stages, the Fortuna Duesseldorf Arena, and 38,000 people from all over Europe were expected to watch the finals live, with an estimated 125 million expected to watch it on television.

The votes for the competition come from selected jurors as well as the public from major and even smaller European countries, such as Georgia, Azerbaijan, Lithuania, Iceland, and Serbia, representing the entire map of Europe.

Eli and Nikki were underdogs in the Eurovision contest, whose finals saw the likes of British boy band, Blue, their Irish rivals, Jedward and the eccentric band Moldova, whose singers wear massive conical hats.

Among the most visible single performers was last year's winner, Germany's Lena Meyer-Landruth, who was expected to face most competition from Amaury Vassili, a tenor from France.

Had 19-year-old Lena won the title, she would have become the first singer to win the Eurovision title back-to-back for two straight years in the 60 years the Eurovision competition has been around.

Ireland's Jedward, consisting of twins John and Edward Grimes, were also high up in the running. The twin blond men have been a vivid sight at Eurovision due to their spiffy hair, as well as "Lipstick," their electro-pop song.

Britain's Blue had a lucky break to get into the finals, as Bulgaria, Italy and Russia voted strongly in favor of a performance for their song, "I Can." The boy band, consisting of Lee Ryan, Duncan James, Antony Costa, and Simon Webbe, has so far been Britain's strongest performers in Eurovision 2011.

The Eurovision Song Content 2011 has been one of Europe's biggest entertainment events, though it has little impact in the United States. Blue's lead singer Lee Ryan probably summed it up best in an interview with The Associated Press, when he said "This contest brings Europe together and it brings people together."