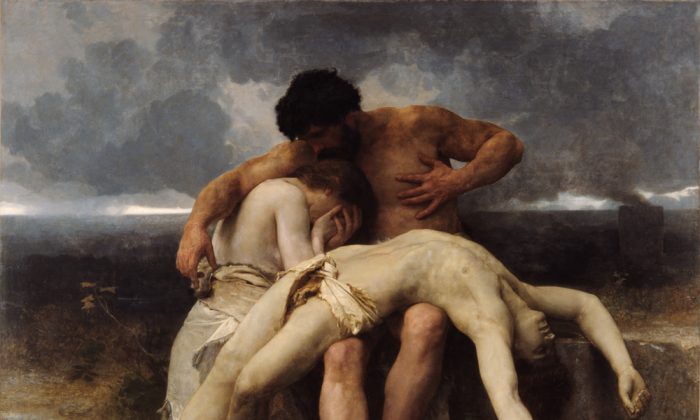 European Art and the Influence of the French Academies

Apart from the École des Beaux-Arts, there were other important and influential academy schools. Many of them, including the École des Beaux-Arts, were either run by members of the institute or had teachers who were members. Among the most important and successful of the schools was the Académie Julian which had significant power in the Société des Artistes Français, giving it a leading voice as it had the largest number of schools and students. The Académie Julian was founded by Rodolphe Julian in 1868, and by 1873 was accepting both male and female students. The school was so successful that many other franchises of it opened all over Paris.

Julian was a student of Alexandre Cabanel. His work had been exhibited at the Salon des Refusés, which exhibits works that did not make it into the Paris Salon, in 1863 and later in the Salon proper, but in 1881 his most prestigious honor was given to him, the Légion d’Honneur, for his role as a teacher. His true skills rested there and not with his personal art. Rodolphe Julian perhaps is best described in a recollection by one of his students, as written in “Confessions of a Young Man” by George Moore:

The Academy Julian has the important distinction of being the first school to accept female students, and it did so a full 30 years in advance of the École des Beaux-Arts.  By 1873 Julian had men and woman studying alongside each other in the same studio, but after criticism, the suggestion of impropriety, and laws at the time that made mixed sex classes difficult, he quickly established separate schools for men and woman. This was accomplished with the encouragement of one of Julian’s first students who later became his companion, Amélie Beaury-Saurel, and with the assistance of the prominent artist and Julian’s good friend, William-Adolphe Bouguereau, who was known for painting depictions of feminine strength.

William-Adolphe Bouguereau (1825–1905) was the most famous and well-known artist in all of France and his fame extended across Europe and America. He was a known fighter for justice and donated considerable amounts of time to help the poor and the misfortunate. He won almost every honor, award and accolade available to a French painter, starting with the Prix de Rome in 1850.

He became a professor at the École des Beaux-Arts in 1875, and was one of the longest serving members of the Institute starting in 1876 till his death in 1905. In 1885 Bouguereau served as President of the Institute, presiding over all five of the academies. In this same year, Bouguereau was elected president of a philanthropic association founded by the philanthropist Baron Taylor, whose goal was to accumulate funds to help support less fortunate artists and their families. At the funeral of Victor Hugo, the most beloved poet and writer in France, Bouguereau was chosen to give the graveside eulogy, as he was as beloved for painting as Hugo was for literature. Bouguereau was one of the head instructors at the Academy Julian and became the President of the Société des Artistes Français. He was a jury member for the Exposition Universalles, the World Fair, of 1889 and 1900, and finally Grand Officer in the in the Légion d’Honneur in 1903.

Bouguereau’s oeuvre was diverse in subject, though he was known primarily for figurative works. His genre paintings can be classified into religious, mythological, nudes, peasants, portraits and scenes of everyday life. He was a tireless worker and on top of family responsibilities and all the administrative duties that came with the various offices he held, Bouguereau painted a total of 828 known finished works, mostly life size canvases and many with multiple figures. This makes Bouguereau one of the most prolific of the academic artists.

Bouguereau had a gift for powerful emotional imagery. In his painting of “Premier Deuil”  (“First Mourning”), for example, the dead body of Abel lies across Adam’s lap in the same manner as Christ is often depicted lying across Mary’s. Adam clutches his heart out of grief and Eve kneels by his side her face buried in her hands. Although this is a religious work, Bouguereau wanted to capture the tangible human experience of losing a child, versus transcendence or holiness.

This makes the imagery more accessible to the viewer and evokes a greater sense of compassion. Bouguereau was no stranger to grief and captured the look of death with frightening directness, he having five children, four of whom died before him. First Mourning was painted directly after the death of his second son. This piece is well titled because it is the first time a human has had to suffer the loss of a loved one. Bouguereau used a play on words in titling this work, because not only are Adam and Eve mourning, but dawn approaches. It is the first day in what will be a seemingly endless chain of days they must grieve the loss of not one but two children, as Cain fled after killing his brother in the chapter of Genesis from the Old Testament.

The other most notable teachers at the Academy Julian include Jules Lefebvre, Gustave Boulanger, Tony Robert-Fleury, Jean-Paul Laurens, Benjamin-Constant, Félix Giacomotti, and Gabriel Ferrier. It should be said that Jules Lefebvre’s importance as an artist and teacher cannot be overstated. He is credited for personally instructing hundreds if not thousands of students from all over the world, many who established their own fame and recognition, embracing numerous pupils from America, including more then one of the famous “Boston Ten” American Impressionists. His nudes became so famous that his only rival was considered to be Bouguereau, though he also painted many clothed female figures and a large body of portraits.

In Lefebvre’s painting of Lady Godiva it is easy to see why his work was so prominent. This monumental work standing 6.2 meters (over 20 feet) tall and 3.9 meters wide (almost 13 feet), makes the viewer feel as though they are actually standing in the scene. The legend of Lady Godiva was a popular theme in the nineteenth century and depicted by many artists, especially in England, as the legend, although it can be traced back to the thirteenth century, was re-popularized by the English poet, Alfred Lord Tennyson. In the legend, Lady Godiva, an eleventh century noble women, pleads to her husband, the Earl, to lower the arduous taxes on his subjects in Coventry who will starve if they have to pay. After pleading with her husband bitterly he told her that if she were to ride through the town naked he would abate the taxes.

Although he meant it scornfully, assuming she would never do it, she sent a herald to tell the town to clear the streets and lock the shutters, at which point she then rode naked through the town. All obeyed the command as she was much beloved, except for one man from which the roots of the phrase “peeping Tom” originates, since someone named Tom, tried to peep at her, and was struck blind as he tried to peer at her through a hole he had created in his shutters.

In Lefebvre’s version of the painting Lady Godiva is in the foreground covering her chest, eyes closed and head raised with an ere of stoic transcendence as she martyr’s herself for her people.  The purple of the robe beneath her designates royalty, as does her crown and lavish saddle. Her lady in waiting appears nervous as she guides the horse, keeping guard to be sure that no one is watching. Lefebvre’s choice of the road being so steep extenuates the distance and emphasizes the empty street. This also draws attention to the viewer, who then can realize he or she is the only one watching her ride and placed in the position of being the only one to ever witness this legendary scene.

In addition to the Academy Julian, both Benjamin Constant and León Bonnat had their own influential schools, though both closed when these two successful artists were appointed to the Ecole des Beaux Arts. Both Benjamin Constant and León Bonnat were members of the Institute and Bonnat became the Director of the Ecole des Beaux Arts in 1905. Benjamin Constant was best known for his Orientalist works and portraits, whereas León Bonnat, although he did do a small number of orientalist works, was best known for his religious scenes and his paintings of Italian peasants. Bonnat had met Jules Lefebvre and Tony Robert-Fleury when he enrolled at the atelier of Léon Coignet and the three became lifelong friends. Two of his notable students were Henri Matisse and Henri de Toulouse-Lautrec.

In this León Bonnat painting, The Broken Pitcher, his style and subject matter had become well defined. The young Italian girl stands lost in contemplation with a broken pitcher at her feet. In the 19th century symbolism was very important and there was certain recognizable imagery placed in many paintings that would read as a language by which viewers could gain the intent of the work if not already apparent. A cracked or broken pitcher represented lost virginity and her deep contemplation implies that she may be pregnant out of wedlock; a serious subject matter that affected many young girls at the time as it still does today, though at the time Bonnat was painting there were even harsher social ramifications. The choice of the energetic, almost post-impressionist background should be noted as another important symbolic element. The violent undulating lines create the impression of a circular vortex surrounding her, suggesting the inner turmoil of her emotional state.

Jean-Léon Gérôme, was a student of Paul Delaroche and had his own atelier at the Ecole des Beaux Arts. Gerome was one of the most recognized artists of his time and was most famous for his orientalist works and very prominent paintings of antiquity, though he also worked as a sculptor. “Jean-Léon Gérôme was among the most officially honored and financially successful French artists of the second half of the nineteenth century. His brilliantly painted and often provocative pictures were at the center of heated debates over the present and future of the great French painting tradition. Reproduced using new photomechanical processes and dispersed across Europe and America, Gérôme’s images indelibly marked the popular imagination, directly influencing spectacular forms of mass entertainment, from theater to film.” Like his teacher he “…chose a theatrical approach to history painting, presenting it on a more human level, and using anecdote as a way to make great history accessible.”

In one of his most famous paintings, Pollice Verso, (Thumbs Down), Gérôme dramatically reconstructs what, in his mind, the gladiators of ancient Rome must have looked like. Although there were a number of historical inaccuracies in the picture, such as the nineteenth century rugs hanging over the arena walls, this painting was so widely recognized during this century that the Latin phrase Pollice Verso, which simply means thumb turned, became associated specifically to thumbs down and thereby thumbs down became associated to the crowd and Roman imperial leaders calling for the death of a fallen gladiator. . This has been commonly used in movies and TV series about ancient Rome ever since. The vivid imagery is both gruesome yet aesthetically beautiful, from the glinting armor to the dappling of light on the ground and the roaring crowds raked in shadow and sunlight.