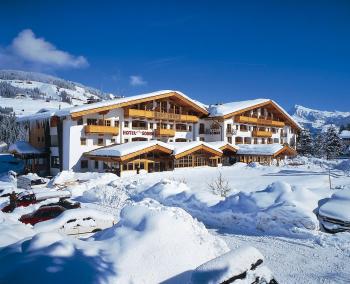 The Sunny Hotel Sonne is located in the town of Kirchberg in the Austrian Tirol. (Courtesy of Albatross Travel Group)
Travel

Imagine gliding across the snow-laden Alps on the magnificent Glacier Express train and then staying high in the mountains, being pampered and perfumed in a glorious Swiss Spa hotel. Or sipping steaming goulash in an 800-year-old Coaching Inn deep in the heart of the snow-covered mountains of Austria.

You may be tempted to think of Europe as a summer holiday destination, but more and more people from Australia are now travelling to Europe during the magical winter season. There is a myriad of amazing sights to explore.

An organised tour is a convenient option that ensures visiting the best places during a seven-day or usual two-week holiday.

Popular Christmas destinations to include are an 800-year-old Coaching Inn deep in the heart of the snow-covered mountains of Austria or for a German Fairytale Christmas, the village beneath the spectacular Neuschwanstein Fairytale Castle.

For a Medieval Bohemian Christmas, spend a few days in a beautifully restored, romantic hotel dating back 500 years located in the heart of the medieval town of Cesky Krumlov in the Czech Republic.
Usually, tours start with stays in the more major cities, but then, as Christmas approaches, they escape to the forest-covered mountains, medieval castles and smaller, nostalgic first class hotels for four or five nights to capture that essential European winter magic.

So many evocative sights can be easily enjoyed without the hustle and bustle of the tourist crowds. The important cultural attractions and museums are still open, but the long entry queues have disappeared!

As the festive season approaches, the snowlines creep lower down the mountain sides. Over Christmas and New Year, the countryside is covered in a glorious carpet of pristine white snow creating a dramatic winter wonderland.

In the Alps, castles perched on craggy hillsides are surrounded by a backdrop of spectacular snow-covered mountain peaks and forests, dusted with snowflakes or drooping under the weight of snowfalls.

Getting from place to place is surprisingly easy as all the important roads are meticulously cleared and easy to negotiate. Many winter days boast crisp, clear blue skies and daytime temperatures hold no horrors. Generally, daytime outings require the simple addition of scarf and gloves, warming hat or beanie, and a few more layers of clothing. Inside all buildings, the heating is turned up, so comfort is assured.

One of the most exciting activities of the festive season involves exploring the many Christmas markets.

So, what are the Christmas markets? Many date back hundreds of years and follow centuries-old traditions, relishing the nostalgia of the season in time-honoured celebrations. Usually held in the old cobble-stoned town centres and surrounded by historic houses and churches, the locals erect rows and rows of wooden cabins as temporary shops.

Brass bands and carol singers gather near tables that burst with sweets, candy and ginger biscuits, while the festive punch fills the air with the aroma of sweet cinnamon. Chestnuts roast on open fires and merrymakers juggle hot potatoes next to row after row of freshly cut Christmas trees waiting to be chosen and taken home.

The twinkling lights, the merry crowds and pink-cheeked children wrapped in bright red scarves and woolly hats are picture perfect. This is Christmas as it should be!

Generally staged over the month running up to Christmas Eve, the markets were originally held in Germany; however, nowadays, Christmas markets are popular through much of Europe and take on all shapes and sizes. The trick is to define which are the most important ones to visit.

The great markets are in Nurnberg, Dresden, Vienna, Stuttgart, Montreux and Salzburg, but don’t forget the other markets like those in Wurzburg, Munich, Strasbourg, Lille and Berne.
The smaller markets, such as those in Innsbruck and Rothenburg, are just as picturesque, with stalls nestled in the tiny alleys by the town hall.

In Provence, France, they are famous for their detailed, handcrafted clay figurines called Santons, a word derived from the Provençal name Santoun, meaning Little Saint.

Taking an organised tour has a few advantages. Consider guaranteed departures, inclusions such as daily excursions, special festive dinners and look for ones that have no options lists to be charged later. This way, you don’t have to be reaching into your pocket all the time, except for special Christmas gifts and fragrant mulled wine and gingerbread!

The Albatross Travel Group offers a tour in the Slovenian Alps commencing in Munich and then visits the fairytale castles of Bavaria followed by two nights in the dramatic Castel Brando of northern Italy before spending four glorious nights over Christmas on Lake Bled in Slovenia.

A real white Christmas, enjoying the traditions of the season, is an experience that will forever remain etched in one’s memories.

Brisbane-based Albatross Travel Group offers a wide range of unique Christmas and New Year tours with a tempting choice of programmes with festive trips that range from 7 to 13 days. They are not “summer tours run over winter”, but festive Christmas tours designed specifically for the Australian traveller.