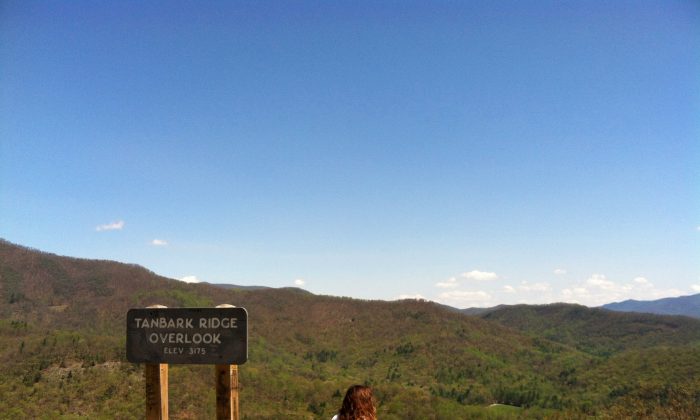 This April 21, 2015 photo shows a visitor taking in the scenery at the Tanbark Ridge Overlook on the Blue Ridge Parkway near Asheville, N.C. Asheville offers a variety of urban attractions from an arts district to a booming restaurant scene, but its location in Western North Carolina also offers easy access to the great outdoors. (AP Photo/Beth J. Harpaz)
Destinations

Essentials: Asheville From the Biltmore to the Honey Bar

ASHEVILLE, N.C. — Asheville, North Carolina, is an old soul of a city renewed by a hipster vibe. Attractions range from new beer breweries and a honey bar to the 120-year-old Biltmore mansion. You can see artists at work in the River Arts District, then go for a hike in the Blue Ridge Mountains. And while there’s plenty to do year-round, fall is particularly lovely. Foliage usually peaks mid- to late October, but depending on weather, color at lower elevations can last into November.

Asheville’s funky River Arts District has been home to artists, entrepreneurs and eateries in the old industrial area around the French Broad River for some time, but the neighborhood continues to add interesting venues. The Smoky Park Supper Club, built from recycled shipping containers and specializing in wood-fired cooking, opened in September. The Smoky Mountain Adventure Center, which will feature an indoor climbing gym as well as rentals for bikes, kayaks, canoes and other gear, is scheduled to open in late fall.

And while the Asheville area already has more than two dozen beer breweries, a $175 million New Belgium facility with a tasting room is expected to be brewing by the end of the year. Other breweries range from the artsy hole-in-the-wall Wedge Brewing in the River Arts District to the gleaming, modernist Sierra Nevada brewery near the airport. Sierra Nevada, which opened earlier this year, also has an excellent restaurant.

Downtown, the Black Mountain College Museum at 56 Broadway has expanded. Through exhibitions and programs, the museum celebrates the ideals and legacy of a remarkable experimental school founded outside Asheville in 1933. The college lasted just 24 years but its faculty was a Who’s Who of avant-garde artists and intellectuals, including Willem and Elaine de Kooning, Merce Cunningham, John Cage and Buckminster Fuller.

Don’t miss the honey bar at the Asheville Bee Charmer, 38 Battery Park Ave. The shop sells 50 varieties of honey, many from North Carolina beekeepers but also imported from France, Italy, Spain, New Zealand, Ireland and Scotland. You’ll be stunned by how different honey can taste — fruity, woodsy, earthy, spicy — depending on where bees collect their nectar. The Center for Honey Bee Research and the “Bee City USA” initiative supporting pollinators and beekeepers are also headquartered in Asheville.

For a look at life in the Gilded Age, visit the 250-room Biltmore, built by George Vanderbilt. It’s the largest private home in the country and attracted 1.5 million visitors in the past year. The grounds, designed by Frederick Law Olmsted, are also spectacular. They include waterways, winding roads, gardens, farms, a winery and gorgeous mountain views. The new Village Hotel on Biltmore opens here in December.

Downtown, take a stroll around Pack Square Park and then tour the Thomas Wolfe Memorial, which includes the writer’s birthplace and a nearby boardinghouse run by his mother. Wolfe’s barely fictionalized depiction of his hometown in his 1929 best-selling novel, “Look Homeward, Angel,” upset the locals so much that it was initially banned in Asheville. Actor Jude Law visited the memorial to prepare for his role portraying Wolfe in a movie due out later this year, “Genius,” which tells the story of Max Perkins, the New York editor who championed the work of Wolfe and other famous writers of his era, including F. Scott Fitzgerald and Ernest Hemingway.

Fitzgerald also spent time in Asheville, notably at The Grove Park Inn, a beautiful old resort established in 1913 when Asheville was a destination for those seeking the healthful effects of mountain air. Drop by the inn even if you only have time for a cocktail on the Sunset Terrace or a quick look at the lobby’s massive stone fireplaces and grandfather clock. The front desk offers free pamphlets for self-guided tours; displays tell the story of visits by presidents and celebrities.

Flights to Asheville’s small airport can be expensive. Nearest major hubs are in Greenville, South Carolina, 77 miles away; Atlanta, 200 miles, and Charlotte, North Carolina, 125 miles ($85 one-way van from Charlotte to Asheville). But with some flexibility, you can score deals, including bargains on Allegiant from West Palm Beach, Florida.

You can explore the River Arts District or downtown in a few hours, but you’ll need nearly a full day to do the Biltmore justice.

Make time for the great outdoors. Even if all you do is drive a stretch of the Blue Ridge Parkway, the scenic overlooks will lift your soul. For hike recommendations and other visitor information, go to http://www.exploreasheville.com.