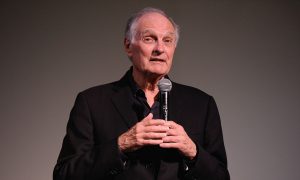 Emmy-Winning Actor Alan Alda Says He Has Parkinson's, but Lives a 'Full Life'
0 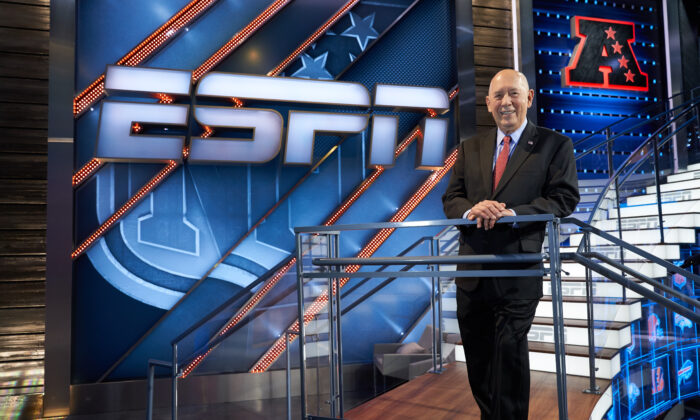 When Bill Rasmussen began his career as a sportscaster for a local radio station in Massachusetts, little did he know he would one day found the world’s first 24-hour, seven days a week sports television network—ESPN.

In April 1963, Rasmussen started off covering football and basketball for a station in Amherst. In the years to come, he would also work at ABC and NBC affiliates in Springfield.

On Aug. 16, 1978, Rasmussen was driving with his son Scott on Interstate-84 to attend his daughter Lynn’s 16th birthday party in Ocean Grove, New Jersey, when they hit a traffic jam. Rasmussen had just purchased a satellite package that would give him the right to transmit live programs on the RCA satellite 24 hours a day, 7 days a week, and he and his son were discussing how to make the most of it.

It was a hot summer day, and a frustrated Scott blurted out, “Play football all day for all I care.” That statement triggered a discussion between father and son on covering a variety of sports, and by the time they had returned from Lynn’s birthday, they had conceived a plan for a 24-hour sports network called ESPN that would feature a half-hour show called “Sports Central,” which would ultimately become the network’s flagship program “SportsCenter.”

On Sept. 7, 1979, ESPN launched its first broadcast, debuting with SportsCenter. Over time, the network would feature the NCAA Men’s College Basketball tournament, the College World Series, and the NFL Draft. By April 1980, ESPN was broadcasting 24/7, forever changing the world of sports media.

These days, Rasmussen is trying to change the world in a different way. In 2014, at age 81, Rasmussen was diagnosed with Parkinson’s disease. At the time he felt healthy and strong, but he had experienced twitching in his left hand from time to time for a few years before. Rasmussen’s daughter was a nurse, and the day they returned home from the doctor visit, they started to learn more about the disease. After his diagnosis, Rasmussen underwent physical, occupational, and speech therapy to set a baseline to determine the progress or decline of his condition.

Rasmussen has maintained a positive attitude throughout the years.

“I don’t like to waste a lot of time feeling sorry for myself or saying, ‘You can’t do this or you can’t do that,'” he said.

On July 15, 2019, he shared his diagnosis with the world, conveying a positive message about his condition.

“First and foremost—I’m doing well,” Rasmussen wrote in ESPN’s Front Row. “For a guy pushing 87, and with the help of medicine that helps treat my symptoms, I still get around quite well and continue to travel the country telling the ESPN/life lessons stories as I have for decades.

“Things are changing for me: The shaking hands have arrived along with walking a little slower. Unexpected balance issues in crowds have led me to alter my airport routine. Per doctor’s orders, I now ride a wheelchair from check-in to aircraft. You might think that’s embarrassing, but not me—no long TSA lines anymore!

“I’m a positive guy. … I always look at the positive side of people, projects, ideas, etc. For some reason, Parkinson’s is kind of an orphaned malady—people don’t like to talk about it, as if it were taboo. Well, 40 years ago, people didn’t want to talk about a 24-hour sports network either as if competing with ‘The Big Three’ broadcast networks was taboo. We never stopped asking questions, solving problems, and selling the dream. A lot of really good people did believe and we see the results of that effort today.

His message drew the attention of patients around the world, as well as from various Parkinson’s research and advocacy organizations.

The Michael J. Fox Foundation was just one of these organizations; it reached out to ESPN’s community outreach division to help raise awareness about the disease. Now, Rasmussen is on the foundation’s patient council and an awareness ambassador for the organization.

Rasmussen serves on the council with 34 other Parkinson’s patients to guide and advise the foundation on strategy and programs to find a cure for the disease. As an ambassador, Rasmussen tells his story and speaks about the foundation’s work, raises awareness, combats the stigma of the disease, and maintains a positive message. He also encourages his fellow patients to face Parkinson’s head-on and to participate in research studies in the early stages of the disease.

“I think it’s absolutely incredible that the most effective medication that we’re using here in 2020 was invented in the 1960s, and there has not been another one as effective as that one to this day,” he said. “If we can get more people involved in research, there will be a quicker path to a newer and better pharmaceutical solution.”

Rasmussen hopes his work as a member of the council and ambassador will raise awareness, inspire other patients, help discover new treatments, and ultimately find a cure for the disease. Today, he is in excellent shape. Even though his left hand is shaking more since his diagnosis, he walks every day, can jog if he wants, and exercises twice a day.

“I just keep on keeping on,” he said.