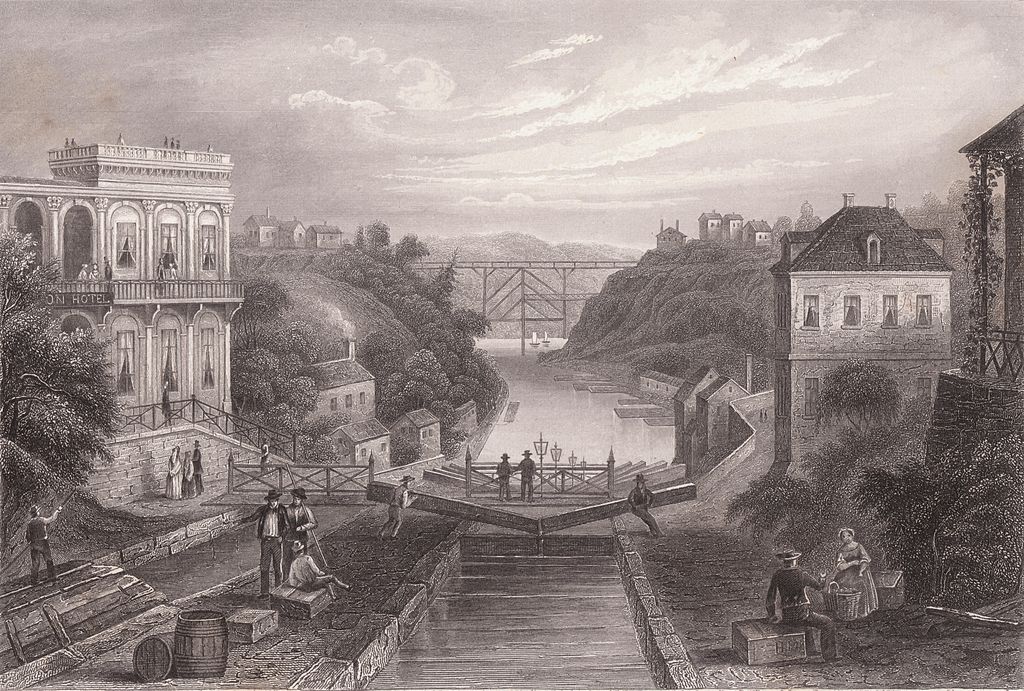 An original lithograph of the Erie Canal at Lockport, N.Y., circa 1855. (Public Domain)
American Essence

Erie Canal: How a Team of Self-Taught Engineers Constructed the Longest Artificial Waterway of the 19th Century

How a team of self-taught engineers overcame obstacles to open a waterway between the Great Lakes and the Atlantic Ocean
BY Rachel Pfeiffer TIMEJuly 18, 2022 PRINT

Boom! Canon fire echoed across the state of New York on October 26, 1825. Men listened carefully at their posts, firing their canon once they heard the distant sound of another. This relay stretched from Buffalo to Manhattan, where the final canon proclaimed that the Seneca Chief had departed Buffalo and was making its way to the coast. The waterway on which it traveled had not even existed a decade before, but now this boat would sail from the eastern shore of Lake Erie to the Atlantic Ocean. It was the first to travel the entire length of the Erie Canal.

As the 19th century dawned and pioneers journeyed west into the Great Lakes region, some advocated for a safer, faster, more reliable form of transportation from the resource-rich land to the coast. As early as 1800, the founding father Gouverneur Morris advocated for a great canal. He wrote:

Does it not seem like magic? One-tenth of the expense born by Britain in the last campaign would enable ships to sail from London through Hudson’s river into Lake Erie. Hundreds of ships will in no distant period bound the billows of those inland seas. … We only crawl about on the outer shell of our country. The interior excels the part we inhabit in soil, in climate, in everything. The proudest empire in Europe is but a bauble compared to what America will be and must be, in the course of two centuries, perhaps of one.

However, some thought that such a large canal would be impossible to complete. “Talk of making a canal 350 miles through wilderness is little short of madness,” Thomas Jefferson declared in 1809.

Though Jefferson spoke for many, a powerful man in New York became one of the canal’s greatest allies. DeWitt Clinton served in the state legislature, as a U.S. senator, as mayor of New York, and as governor of New York state. He advocated for a canal while working in the state legislature and as New York mayor. Clinton believed the canal could launch his city toward prosperity.

“The city will, in the course of time, become the granary of the world, the emporium of commerce, the seat of manufactures, the focus of great moneyed operations,” Clinton said.

The proposed canal would stretch from the eastern shore of Lake Erie to the Hudson River, a length over twice as long as the longest canal in the world at the time. The federal government declined to fund it, so the state of New York stepped in to bear the cost. This massive project was made even more difficult by the fact that the United States had no formal engineering schools at the time. When construction on the canal began in 1817, the men serving as engineers were entirely self-taught.

Benjamin Wright loved math from a young age, which led to a career as a surveyor. He helped determine the route for the canal and was hired as the chief engineer for the project. One of the brilliant assistant engineers Wright hired was Canvass White.

White built inventions growing up on his parents’ farm. He started working as a clerk at 17, but in his early 20s, he left on a sea voyage. He traveled to Russia and then England, seeing distant lands he had only heard of.

On the return from England, a ferocious storm drove the ship aground. An inspection revealed much of the bottom of the ship was rotten. White recommended replacing the rotten planks and digging a channel to the ship so the tide could reach it. The crew soon found themselves sailing toward home, the happy beneficiaries of Canvass White’s ingenuity.

A few months after his return, White enrolled at Fairfield Academy. He completed studies in mathematics, astronomy, chemistry, mineralogy, and surveying. A brief stint in the Army interrupted his advanced studies. He served as a lieutenant in the siege of Fort Erie, which was one of the last engagements of the War of 1812, but after being wounded he returned home.

In 1816, Wright hired White for the canal project. White quickly earned his trust and impressed DeWitt Clinton as well. From 1817 through the spring of 1818, White traveled Europe collecting notes and drawing detailed sketches of canals, which would prove invaluable.

While the engineers were more than capable of digging the ditch for the canal, several components posed problems. Locks, which raise or lower the water level to get boats up or down inclines, and aqueducts, which carry the canal over obstacles such as a road or a river, created difficulties for amateur canal builders. White’s research equipped them to construct these features.

Upon his return, White was soon hard at work improvising and problem solving alongside the other brilliant canal engineers. Benjamin Wright grew to rely on him. Perhaps White’s greatest contribution was his invention of hydraulic cement. This cement hardened underwater and held up just as well as the much more expensive European cement.

“I have no hesitation in saying that the discovery of hydraulic cement by Mr. White has been of incalculable benefit to the State,” Wright declared.

White continued to work on the canal through its completion, and years later Wright reflected on how invaluable a resourceful and inventive engineer like White was to the canal project.

“To this gentleman I could always apply for counsel and advice in any great or difficult case, and to his sound judgment in locating the line of the canal, in much of the difficult part of the route, the people of this State are under obligations greater than is generally known or appreciated,” Wright wrote.

The engineers and crew made slow but sure progress, and as 1825 neared, so too did the completion of the canal. The eastern section proved to be particularly difficult.

“None but those who have examined the line previous to the commencement of the work; who had seen the rude and undulating surface which is traversed, the rocks which were to be blasted, the irregular ledges, filled with chasms and fissures … can easily appreciate the efforts which it has required to surmount these serious obstacles,” the Canal Commission reported in 1824.

Even with the obstacles of topography, finances, and expertise, the Erie Canal reached completion in 1825. The finished canal was 40 feet wide and 4 feet deep. It featured 83 locks and 19 aqueducts, stretching 363 miles from Buffalo to the Hudson.

DeWitt Clinton sailed across this vast, manmade waterway in the fall of 1825. Upon reaching New York, Clinton emptied a keg of water from Lake Erie into the Atlantic. The “wedding of the waters” marked a new era, one that would bring prosperity to the state that risked much to see the canal to completion. In just eight years, tolls paid the cost of the canal.

A small group of men made an impossible project a success. “The engineers have devoted themselves to the management and superintendence of the works with a zeal and ability. … When it is considered that they could have had no experience, that the science they acquired must have been in a great measure the result of mental application, … they deserve a commendation, to which anything we could say would be very inadequate,” the Canal Commissioners wrote.

“No eulogy could do so much justice as an appeal to their works. It has been said, and it is believed truly, that they have completed, in the shortest time, and at the least expense, the longest uninterrupted canal in the world.”

The state expanded the Erie Canal to 70 feet wide and 7 feet deep in 1835 and then to 150 feet wide and 12 feet deep in 1915. The 1915 overhaul also included changes to the canal’s route. As railways and other forms of transportation grew, the use of the canal shrank. Today, the canal is used primarily for recreational purposes such as boating, and many people drive, hike, and bike along its banks. For more history and information, visit eriecanalmuseum.org and eriecanalway.org