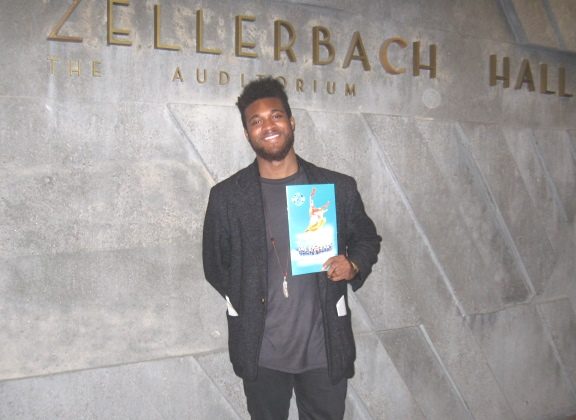 Student and musician Jordan Coffey was impressed with the music and culture of Shen Yun Performing Arts, calling it one of the best performances he had ever attended. (QIan Zhang/Epoch Times)

BERKELEY, Calif.—Student and musician Jordan Coffey was impressed with the music and culture of Shen Yun Performing Arts, calling it one of the best performances he had ever attended.

Mr. Coffey has played the erhu, a traditional Chinese stringed instrument, for four years. He appreciated the skill of Shen Yun’s erhu soloist: “Seeing it actually live, especially at that level—it was amazing.”

New York-based Shen Yun is on its ninth annual world tour with the mission of bringing China’s ancient culture to life through classical Chinese dance, a live orchestra, and vocal and instrumental soloists. Mr. Coffey attended the performance on Jan. 7 at Zellerbach Hall in Berkeley, Calif.

According to Shen Yun’s website, “The erhu is one of the most important Chinese instruments, with a history of over 4,000 years. Though it has only two strings, it can convey a wide range of emotions.”

Shen Yun’s erhu piece was both “soothing, nurturing,” and “wakes you up and wants you to move,” Mr. Coffey said. “You have the slow beginning and the long drawn-out pieces that kind of evoke sadness, but then you speed it up and it makes you more excited and more alive,” he said.

“Every culture, before written language became very popular, would tell stories,” Mr. Coffey said. “Those stories would be verbal, and also through dance. So I believe that Shen Yun captures that tradition of telling stories through dance that can’t be told through writing.”

As the company’s website explains, “Classical Chinese dance is rich with expressive power. Through expression of bearing and form, beautiful dance movements bring out the inner meaning of intrinsic thoughts and feelings.”

“It evokes more emotion than writing [does], because you can read the body motion. That’s a universal language,” Mr. Coffey said.