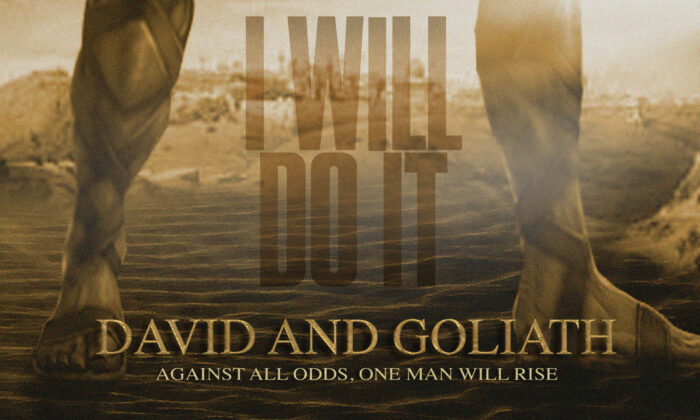 I’ve watched many a Biblical film over the years—some good, but many bad. I must say that most of the more recent big-budget, so-called Biblical epics, such as “Exodus: Gods and Kings,” and “Noah,” both 2014 offerings, have been utterly disappointing. Although these films are technically sound, they also feel soulless and ultimately—forgettable (not to mention, inaccurate).
However, I’ve been learning more and more about faith-based film director Timothy A. Chey’s penchant for delivering Biblical tales in a much more entertaining fashion. Having reviewed 2021’s “Interview With the Antichrist,” and 2016’s “Slamma Jamma” recently, I’ve been looking forward to seeing what Chey, along with his excellent cast and crew, could do with the greatest underdog tale ever told, in 2015’s “David and Goliath.”

The movie kicks off with a narrator giving some backstory to the proceedings as we see the mighty Philistines, a people who had arrived in Canaan at the beginning of the 12th century B.C., steamrolling over the city-states of Gaza, Asheklon, Ashdod, Ekron, and Gath, which they absorbed into their burgeoning empire.

We learn that one of the reasons the Philistines were such a dangerous threat was that they’d advanced to the Iron Age before the various tribes around them, and possessed highly advanced weaponry. We also discover another, as we behold the Philistine’s greatest warrior, the giant Goliath (Jerald Sokolowski), dispatching multiple enemy soldiers with relative ease.

In an almost dreamlike cinematic sequence, Goliath’s voice booms throughout the fertile Valley of Elah (now in present-day Israel and the West Bank). Near the end of it, we find our main protagonist, David, played ably by Miles Sloman, reaffirming his faith: “Lord, you are my fortress…and my salvation. Of who shall I be afraid?” We also hear the baying of sheep and see a number of the fluffy animals surrounding him. David begins his life as a sheepherder, a humble profession by any time period’s standards.

King Saul (Paul Hughes) receives word from one of his Israelite soldiers that the Philistines, led by Jaggar (Jared Morgan), are on the move. Indeed, they’re on the move alright—they want to move right in and take over the entire Kingdom of Judah—after crushing the Israelites like they have so many other people, of course. King Saul intends to head off Jaggar and his battle-hardened army at the Valley of Elah. Thus, the stage is set for an epic clash.

Jaggar, along with Goliath and the rest of his menacing, dark-clad army, decides on camping out around King Saul and his people—blocking the roads off in an attempt to starve them out of their fortified positions. “And then we will move in! Kill every one of them!” Jaggar boasts as he and his minions eye their foes from a distance. However, he does acknowledge his enemy’s fierceness and worries that “they may have magic on their side.” He also tells one of his subordinates: “Remember, the tales of Gideon and Joshua. We cannot take them so lightly.”

As the Philistines quickly move into the Valley of Elah, many of the Israelite commoners begin to panic and flee the area. As they do, David’s faith in God remains stalwart, believing that the Lord Almighty will protect them. Saul orders the evacuation of Judah and prepares to make his final stand against the Philistines.

As Goliath repeatedly taunts the Israelites from afar, David’s military brothers, Eliab and Abinadab, wimp out at the prospect of meeting the giant warrior in close combat. David, sensing an inevitable showdown with Goliath, hands his flock of sheep off to a couple of locals—he’s got some business to take care of and the rest, you might say, is firmly enshrined in the Good Book.

Although most people probably already know what happens when David and Goliath finally collide, this film is a very entertaining retelling of the events leading up to the famous duel (as well as the final fight between the two mortal foes).
Chey’s “David and Goliath” is a very soul-quenching, inspirational film that gets better with each viewing (I’ve watched it three times already, thus far). It’s an uplifting cinematic experience, especially suited for these turbulent times.
‘David And Goliath’ is available to watch on Epoch TV—visit the link here.