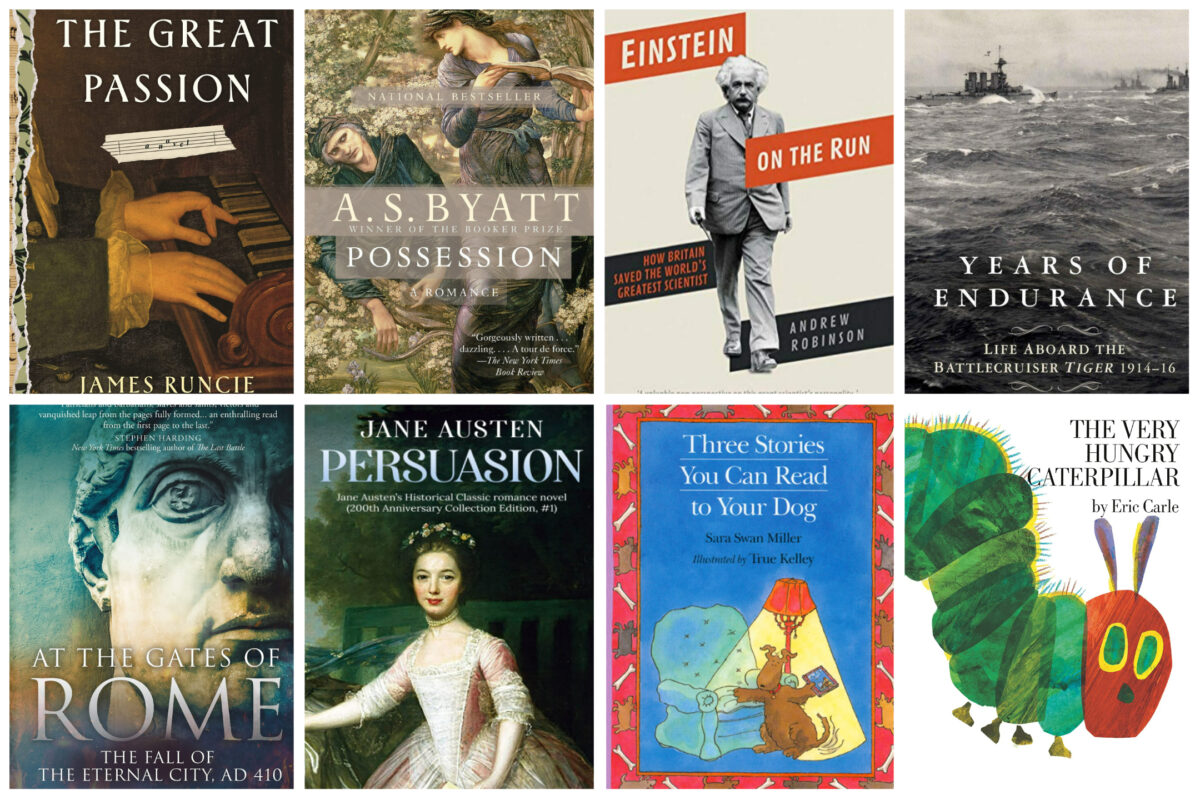 This week, we feature an incisive analysis of the Goths’ sacking of Rome and an endearing novel about a boy saved from grief by a musical genius.

From Grief to the Solace of Faith

‘The Great Passion’
By James Runcie

It’s 1727 and 13-year-old Stefan Silbermann is grieving the loss of his mother. When he’s sent to school in Leipzig, her absence plagues him further. Then, the school’s cantor, Johann Sebastian Bach, hears beauty in his voice and his life is forever changed.

A Meeting of Passions and Ideas

Two modern literary researchers, Maud Bailey and Roland Mitchell, explore the tangled lives of two Victorian poets, Randolph Ash and Christabel LaMotte. Byatt’s novel is jam-packed with poetry, letters, mystery, and love thwarted and found, all of which should delight lovers of literature. Back and forth we go between these two couples, who struggle to find their way through attachment and emotion. Over this story, too, hangs a cloud: the “cunning” of love and fate. This is a perfect read for autumn evenings.

‘Einstein on the Run: How Britain Saved the World’s Greatest Scientist’
By Andrew Robinson

Albert Einstein was one of the 20th century’s great men. Although famous for his theory of relativity, he was an accomplished musician, a noted pacifist, and an Anglophile. He was also an assassin’s target in the 1930s. This book tells two tales: one of the mutual admiration between Einstein and Great Britain and the other of how England offered Einstein sanctuary when his life was in danger. This focused biography recounts Einstein’s life in the context of his relationship with Britain.

The North Sea in World War I

‘Years of Endurance: Life Aboard the Battlecruiser Tiger 1914–16’
By John R. Muir

At the beginning of World War I, John R. Muir was a Royal Navy surgeon. An avid yachtsman, he served as surgeon on the battlecruiser Tiger. He joined the HMS Tiger prior to its 1914 commission and remained with it past the 1916 Battle of Jutland. First published in 1936, this memoir describes life aboard the ship and its service during battle and as such offers a fascinating look at a Royal Navy surgeon’s life, ashore and afloat.

‘At the Gates of Rome: The Fall of the Eternal City, AD 410’
By Don Hollway

Don Hollway has given readers an incisive look into how Rome came to be sacked by the Goths in 410 A.D.: constant warring, usurpation, the untenable division of the empire between east and west, a city-state that turned on its protector, and a leader who sought revenge. It’s a beautifully written and intriguing work on the fall of Rome.

After financial distress forces her family to rent out their beloved home to an admiral, Anne Elliott, 27, finds herself entangled once again with Capt. Frederick Wentworth. He’s brother to the admiral’s wife and the fiancé Anne had broken up with seven years earlier under pressure from her family and a close friend. Austen’s final novel offers us a tender and oftentimes humorous tale of the renewed romantic interest between the pair, while underlining the meaning of true love and the intervention of fate and possibility.

Youngsters (and maybe even the dog) will get a charge out of these tales: “The Burglar,” “The Bone,” and “The Wild Dog.” True Kelley’s illustrations of this goofy pet and his exploits just add to the pleasure. This book is for preschool to Grade 3.

‘He Was Still Hungry’

As a caterpillar eats his way through the week, young readers will learn colors, numbers, the days of the week, and the life cycle of a butterfly. They’re sure to giggle at the repeating refrain after each of the caterpillar’s meals.