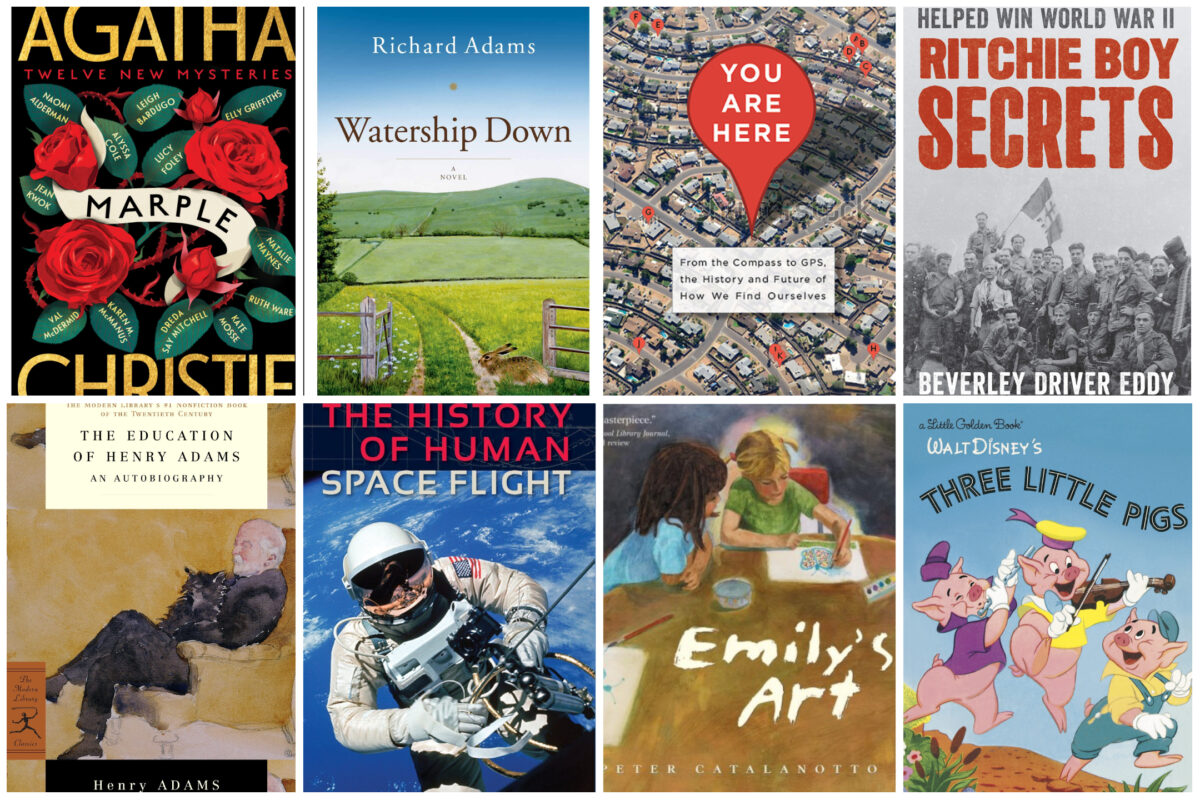 This week, we feature a marvelous slew of new Miss Marple mysteries and a comprehensive journey through the history of space exploration and navigation.

Miss Marple fans will be thrilled—with 12 thrills, to be exact. Twelve authors have created new cases for the brilliant detective. Agatha Christie’s last mystery novel was published posthumously in 1976, but these tales promise to echo the genius of the late author.

‘Watership Down: A Novel’
By Richard Adams

Wondering why a book about rabbits leaving their warren in search of a new home isn’t under “For Kids”? It’s because this saga of bravery, intelligence, and danger is for readers of all ages. Published exactly 50 years ago, it won awards, became a wildly popular bestseller, and still attracts readers today. The tale of Fiver, Hazel, and the other fugitive rabbits originated when Adams told their stories to his daughters, who insisted he write them down. Treat yourself and the family to an adventure.

‘The History of Human Space Flight’
By Ted Spitzmiller

The Space Age opened with Sputnik 1 in 1957. Humans entered outer space soon after that and have been space traveling for more than half a century. This book attempts to capture that history—all of it. Spitzmiller’s opening chapters define outer space. From there, he takes readers from before the manned spaceflights of the 1960s through to today’s missions. While the book is written so that lay readers can understand it, even rocket scientists will enjoy its rigorous accuracy and exciting story.

Navigation Through the Ages

‘You Are Here: From the Compass to GPS, the History and Future of How We Find Ourselves’
By Hiawatha Bray

It’s getting harder to get lost, whether you want to be or not. This book explains why. This history of navigation also examines the privacy implications in a society where you can be tracked by your possessions and your habits. Technology now offers the unprecedented ability to find ourselves, wherever we are. It also permits unprecedented invasion of our privacy. Anyone, especially the government, who wants to find you can.

Not Your Average Summer Camp

Supported by years of research and interviews, this book offers an unusual World War II story. In 1942, the U.S. Army recruited many immigrants and refugees who were fluent in languages and familiar with enemy lands and cultures. They were expertly trained in Maryland at Camp Ritchie and proved invaluable to the war effort.

An Autobiography of an Educator

A direct descendent of two U.S. presidents, Henry Adams (1838–1918) viewed his life as a teacher and writer as one of unfulfilled political possibilities, yet he left behind a masterpiece of an American autobiography. Privately published in 1909, his work found a wide audience after his death, won him a Pulitzer Prize, and is still read today for its trenchant wit, its many one-liners, and for Adams’s keen powers of observation. “A teacher affects eternity,” he writes, and “Education” stands as witness to his influence on readers.

Painting With the Heart

Emily’s first-grade class has an art contest. Will she win? And if not, what will losing do to her? Colorful illustrations, thoughts on friendship, and doing something you love make this a winner for budding artists. Grades K–3.

This fun and familiar Little Golden Book story is a must-have for any child’s library. While learning the virtues of hard work and forbearance, young readers will giggle away as they huff and they puff and … well, you know the rest.