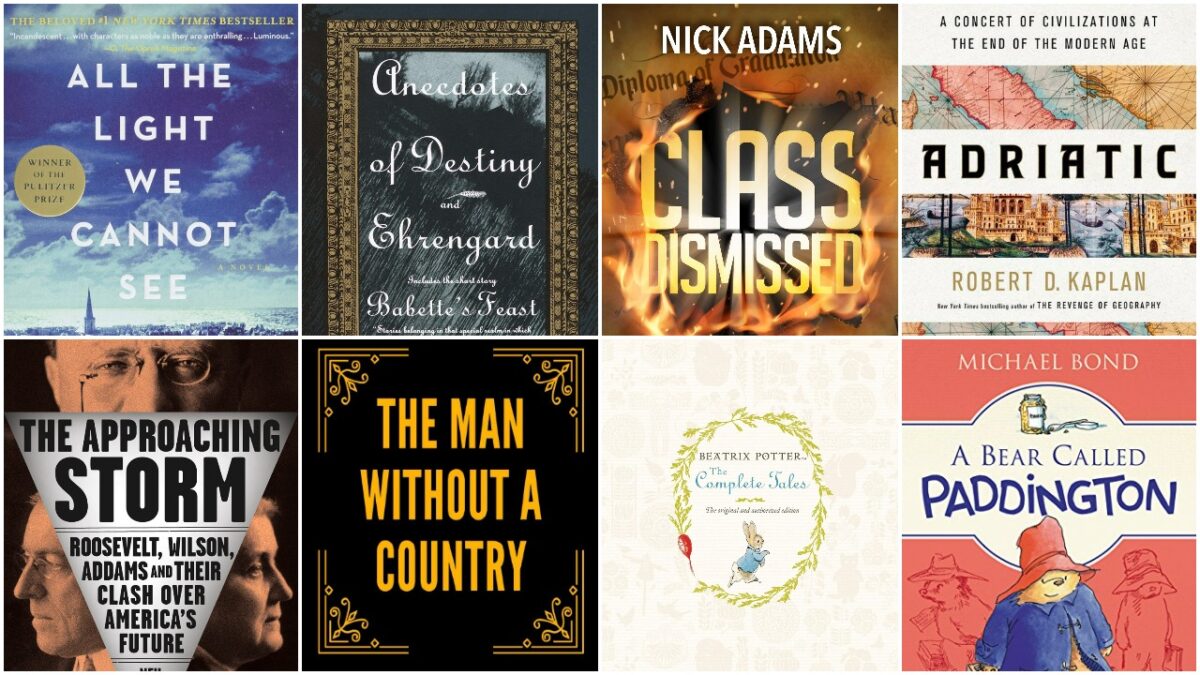 This week, we feature a history exploring how the United States decided to join World War I and a classic about a traitor who grows to love his homeland.

Goodness Found, Even in War

‘All the Light We Cannot See’
By Anthony Doerr

A French girl named Marie-Laure LeBlanc has fled Paris with her father to the walled citadel of Saint-Malo. A German boy named Werner Pfennig is an expert transmitter, and he tracks the enemy. Two young lives, two warring cultures, both cling to survival in 1944.

Stories From a Great Danish Writer

‘Anecdotes of Destiny and Ehrengard’
By Isak Dinesen

This collection of stories includes the beautiful tale “Babette’s Feast,” later made into an equally fine film. Babette, a chef, now a refugee from revolutionary France, becomes a servant of two sisters bound to their past and the strictures of their pietistic religious faith. Both suffered romantic disappointment in their youths. After years of devoted service, Babette wins a lottery and spends the money on a lavish feast for the sisters and their friends. A beautiful tale of the meaning of sacramental grace.

When College Isn’t the Only Answer

‘Class Dismissed: Why College Isn’t the Answer’
By Nick Adams

A college degree often costs more than $60,000. Adams argues that college may not be the best road to a successful career. For many, it’s a four-year detour. He suggests alternative paths to career success. In fact, half the book discusses remunerative careers attainable through trade schools or community college certifications. He lists people who didn’t finish college, including James Cameron, Michael Dell, and Anna Wintour. Anyone uncertain about whether college is for them should read it.

The Line Between East and West

‘Adriatic: A Concert of Civilizations at the End of the Modern Age’
By Robert D. Kaplan

Where does the West end and the Orient begin? Kaplan claims the Adriatic Sea forms the dividing line. Part travelogue, part history, and part personal reminisce, this book explores the Adriatic from ancient times through the present day. Kaplan takes readers around the Adriatic, starting in Rimini, Italy, and working his way around the coast to Corfu, Greece. He examines each stop’s history, culture, and place in the modern world.

America’s View of World War I

‘The Approaching Storm: Roosevelt, Wilson, Addams, and Their Clash Over America’s Future’
By Neil Lanctot

The United States had no interest in participating in The Great War, as Neil Lanctot makes very clear in his book. But those opinions began to change for its citizens and especially for its nation’s leaders. This book is a superb analysis of the views of Woodrow Wilson, Teddy Roosevelt, and Jane Addams that helped frame America’s decision to go to war.

‘The Man Without a Country’
By Edward Everett Hale

Swept up in a treasonous plot along with Aaron Burr, Army Lt. Philip Nolan exclaims at his trial, “Damn the United States! I wish I may never hear of the United States again!” The judge grants his wish, and Nolan spends the rest of his life aboard a ship, never setting foot again in the states and never allowed to read a newspaper or discuss contemporary events. Hale’s short story about love of country remains pertinent today, reminding young and old alike of the importance of patriotism and the beauty of American ideals.

Here in one volume are 23 tales, plus their original illustrations, about such beloved icons as Peter Rabbit and Benjamin Bunny. This volume also includes four stories published after Potter’s death. This book is a delight for the little ones.

That Sort of Bear

First published in 1958, “A Bear Called Paddington” tells the story of a marmalade-loving bear who finds a loving home with the Brown family of London. Paddington says: “Things are always happening to me. I’m that sort of bear.”