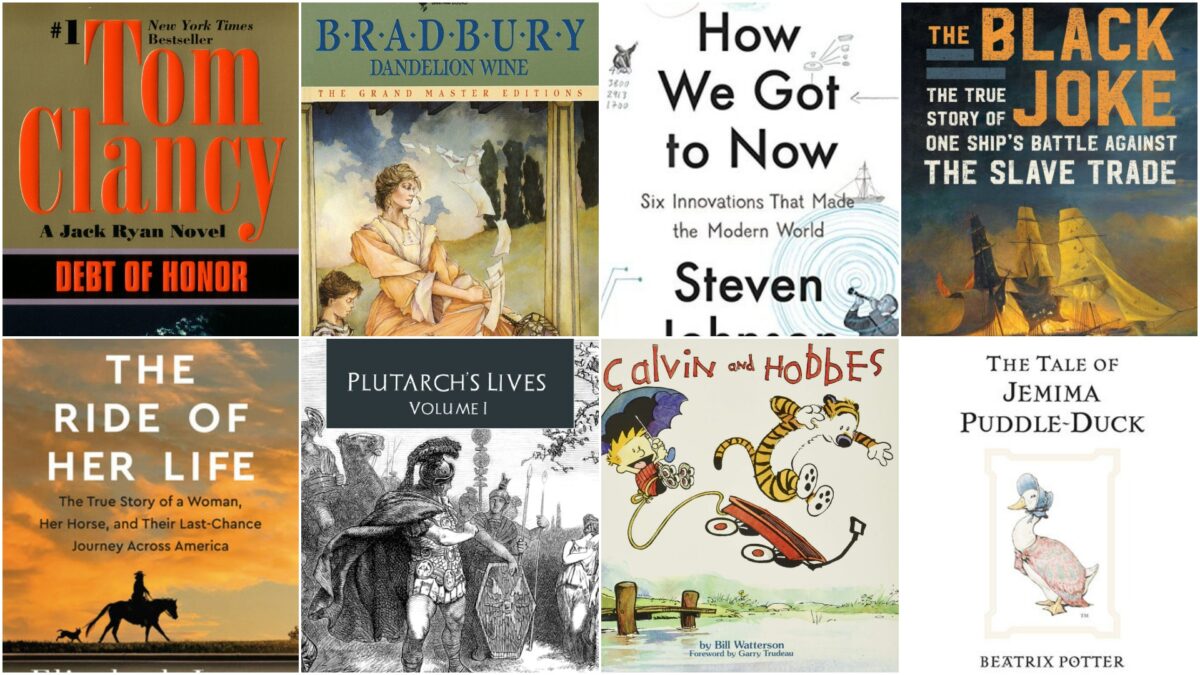 Epoch Booklist: Recommended Reading for May 13–19

This week’s selection of books features a thriller that nearly predicted 9/11 and an account that traces important technologies through history.

‘Debt of Honor’
By Tom Clancy

Tom Clancy became a literary icon nearly overnight with “The Hunt for Red October.” Those interested in military activities around the world became massive fans. His book “Debt of Honor” practically predicted 9/11. The classic character Jack Ryan takes the lead.

A Romp Through Boyhood Summer

In this autobiographical novel, Ray Bradbury whisks us back to 1928 in Green Town, Illinois. Douglas Spaulding, at 12 years old, engages in adventure and intrigue while also brooding on his impending adulthood and the larger questions of life. It’s a summer of new sneakers, fireworks, and family stories. With Grandpa’s dandelion wine serving as a symbol of the season’s essence, Bradbury recreates the simple joys and pleasures of his childhood’s small-town life. A great read for older kids and adults alike.

Journey Through Time by Tech

‘How We Got to Now: Six Innovations That Made the Modern World’
By Steven Johnson

This book examines six technologies that formed the modern world: glass and glassmaking, cooling and freezing, sound projection and recording, sanitation, time measurement, and artificial light. The chapters follow each item from ancient times to the present, showing their impacts on society. For example, the chapter on glass begins as jewelry in ancient Egypt and ends with its use as fiber in telecommunications today. It’s a fascinating look at the history of technology and its effects.

A Ship That Was No Joke

‘The Black Joke: The True Story of One Ship’s Battle Against the Slave Trade’
By A.E. Rooks

This book tells of a ship that was instrumental in closing the illegal West African slave trade. Never a formally commissioned warship in the Royal Navy, the Black Joke was the vessel of Britain’s West Africa Squadron most feared by slave traders. Black Joke captured or participated in the capture of 14 slavers, freeing more than 5,700 slaves. It’s a classic study on the subject and one that will be considered valuable a century from now.

Last of the Saddle Tramps

‘The Ride of Her Life’
By Elizabeth Letts

It’s 1954. Maine farmer Annie Wilkins, at 63 years old, is told that she has just a few years left to live. With no family and little money, she decides to fulfill her dream of seeing the Pacific Ocean. She leaves with her dog, Depeche Toi; her horse, Tarzan; and a hopeful heart. This is a true story of an incredible journey of faith.

Guiding Lights From the Ancients

Historian, biographer, and essayist Plutarch wrote parallel biographies of Greek and Roman statesmen, rulers, and warriors. In these comparisons, he was less interested in the history of these notable men and more so in their personal character: their sense of honor and duty, their humanity, their leadership skills, and their largesse of spirit and wealth. These biographies influenced such writers as Shakespeare, Montaigne, and Emerson. America’s Founders also took lessons from Plutarch on vice, tyranny, and civic virtue.

A Boy With a Big Imagination

‘Calvin and Hobbes’
By Bill Watterson

These hilarious cartoons about a boy, his imaginary friend—a tiger—and their adventures and mishaps will bring laughter to readers young and old alike. An added bonus is a vocabulary-rich text for the younger set. This book is for elementary school students to adults.

‘The Tale of Jemima Puddle-Duck’
By Beatrix Potter

Jemima Puddle-Duck wants to find a place to lay and keep her eggs. When a foxy gentleman offers to help, Jemima’s fate becomes uncertain. No child’s bookshelf should be without the adorable farmland characters of Beatrix Potter.