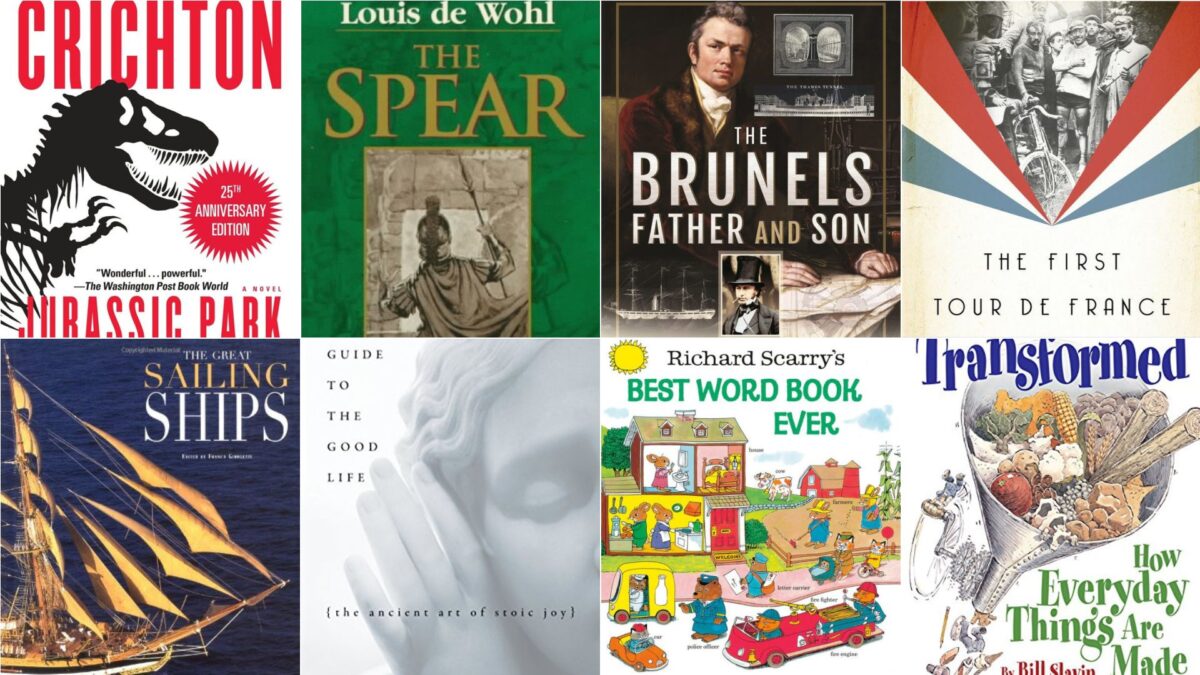 This week’s picks feature the novel that started the “Jurassic Park” craze and a biography of possibly the two best engineers of the 19th century.

The Nightmare of Bioengineering

The newest—and “wokest”—addition to the Jurassic series is in theaters, so we recommend going back to where it all began: “Jurassic Park” the novel. Journey into the world of DNA manipulation, dinosaurs, and an adventure park that eventually turns into a nightmare.

‘The Spear: A Novel of the Crucifixion’
By Louis de Wohl

Set around the time of Christ’s crucifixion, this book includes fictional characters along with people such as Pontius Pilate, his wife Claudia, and Longinus, the soldier who thrust his spear into Jesus on the cross. The author regarded this novel as his finest work, and as we unravel its tapestry of love, revenge, and redemption, we can understand why. Here we encounter the ancient world of Romans and Jews. Bolstered by de Wohl’s extensive research, we leave the book with a greater appreciation of that age.

‘The Brunels: Father and Son’
By Anthony Burton

Isambard Kingdom Brunel may have been the best engineer of the 19th century, except possibly for his father, Marc Isambard Brunel. This is a remarkable biography of two remarkable men. Isambard built the Great Western Railroad and three pioneer steamships, including the SS Great Eastern. Marc built the Thames Tunnel and pioneered mass production. Burton highlights each man’s accomplishments, showing how the two complemented one another and how both helped shape the industrial age and modern times.

The Start of a Sports Tradition

‘The First Tour de France: Sixty Cyclists and Nineteen Days of Daring on the Road to Paris’
By Peter Cossins

The quintessential French sport is cross-country bicycle racing. Why is bicycle racing so associated with France? This account of the first Tour de France answers that question. We see the cycling craze that swept Europe in the 1880s, the nationalism and commercial competition that created the race, and its creator claiming that participants were exemplars of French manhood. Sports enthusiasts and adventure lovers will love this read.

The History of Sailing

‘The Great Sailing Ships (From Technique to Adventure)’
By Franco Giorgetti

Wondering how sailing ships came about and how they evolved over the centuries? Franco Giorgetti has assembled a fine collection of artwork and photos spanning several millennia to demonstrate just how vital sailing was to commerce and the expansion of civilization. A beautiful and insightful book for lovers of the high seas.

‘A Guide to the Good Life: The Ancient Art of Stoic Joy’
By William Irvine

Stoic joy? Many readers may be baffled by that subtitle of Irvine’s book. Stoic joy seems a contradiction in terms. Indeed, when he began his book, Irvine found that many people thought the Stoics suppressed “all emotion and … led grim and passive lives.” As readers will discover, Irvine instead learned that Stoics, such as the Roman Emperor Marcus Aurelius or the slave Epictetus, gave us the ways and means to live a happy life, face our daily trials, and deal with everything from egregious insults to old age.

Where Education and Fun Meet

A great book for preschoolers and early readers. Hundreds of illustrations matched by identifying tags show children everything from a corncrib to a firefighter’s rescue net. Share with the little ones as you explain the pictures.

‘Transformed: How Everyday Things Are Made’
By Bill Slavin

Curious minds will relish this fun encyclopedia featuring steps in the manufacturing process of familiar items, such as baseballs, books, ice cream, and erasers. Illustrations and verbal descriptions are both informative and engaging.