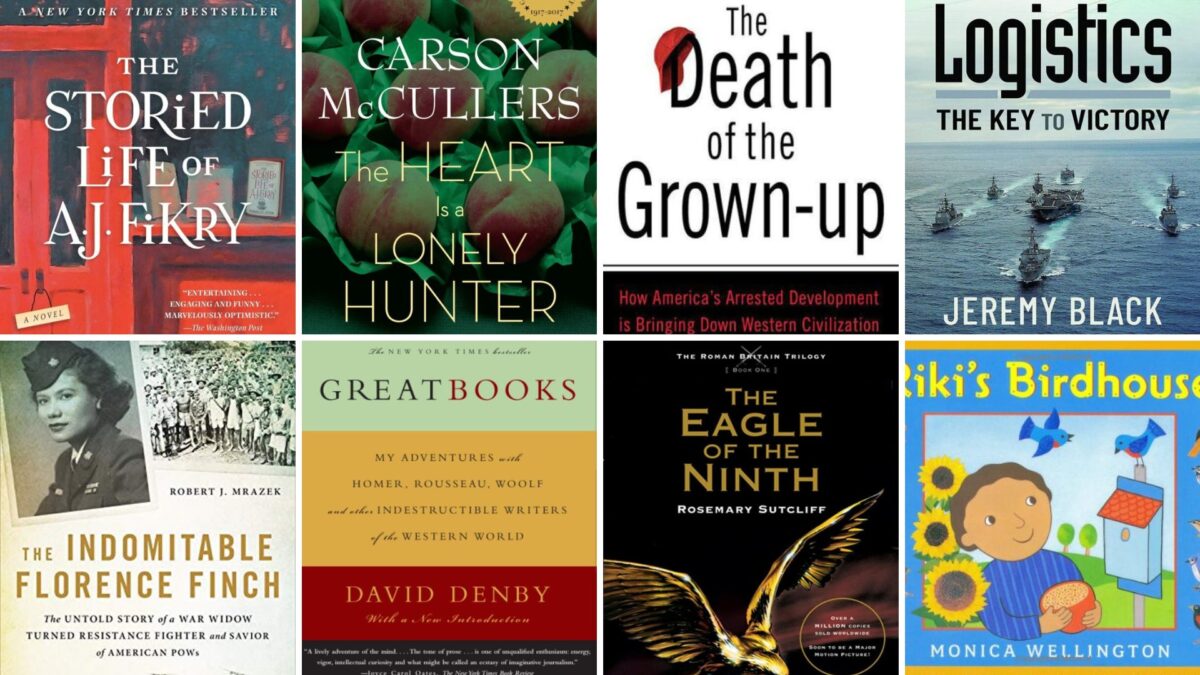 This week, we feature the harrowing story of a Filipina war widow’s courage, and an insightful commentary on the effects of America’s fixation on youth.

A Story of Second Chances

‘The Storied Life of A.J. Fikry: A Novel’
By Gabrielle Zevin

A.J. Fikry is a curmudgeon. Life hasn’t panned out how he’d planned. He’s alone and the owner of an underperforming bookstore. Things worsen when a prized book is stolen. But when a surprise package arrives at his store, it offers him the chance to remake his life.

The Search for Love and Understanding

‘The Heart Is a Lonely Hunter’
By Carson McCullers

Published when McCullers was 23, this 1930s Georgia-based story focuses on deaf John Singer, who loses his best friend, a deaf-mute, to mental illness and an asylum. Lonely Singer offers friendship and solace to several lost souls in town: a black physician; a strange, frustrated girl; the owner of the café where Singer takes his meals; and a drunk given to spells of rage. This top-selling novel about alienation, despair, and grace affects today’s readers as powerfully as when it appeared 82 years ago.

‘The Death of the Grown-Up: How America’s Arrested Development Is Bringing Down Western Civilization’
By Diana West

West documents Americans’ pursuit of perpetual adolescence and its impact on domestic society and the world. The author itemizes the many ways in which people today delay or avoid becoming adults. Popular art, dress, and culture put a premium on youth, not maturity. The result? Indecisive parents refuse to assume parental responsibility, and children are sexualized at ever-younger ages. If you can read this book without becoming worried, perhaps there’s something to worry about.

What Military Professionals Talk About

‘Logistics: The Key to Victory’
By Jeremy Black

In a 1979 interview, Marine Corps Gen. Robert Barrow stated: “Amateurs talk about strategy and tactics. Professionals talk about logistics.” This book looks at the role logistics has played in warfare throughout history. Prior books on logistics have focused on its tactical aspects—how to get supplies where they were needed. Black examines the strategic role of logistics. For those interested in strategy, it’s a valuable book.

‘The Indomitable Florence Finch: The Untold Story of a War Widow Turned Resistance Fighter and Savior of American POWs’
By Robert J. Mrazek

It would be decades before family and friends learned of the unsurpassed intelligence, sacrifice, and fortitude of Florence Finch, who wanted to help in the ways that she could. The unassuming but resilient Filipina native proved a savior to imprisoned POWs during the Japanese occupation of the Philippines during World War II.

Self-Reflection and the Classics

‘Great Books: My Adventures With Homer, Rousseau, Woolf, and Other Indestructible Writers of the Western World’
By David Denby

This book chronicles Denby’s return at age 48 to take two “great books” courses at Columbia University. He analyzes the classics while pondering the culture wars of that day—1997—and the place of Western literature in academia. Are these books really intellectually stultifying? A film reviewer for many years, here he brings his critical skills to literature to ultimately celebrate these books and authors. A fascinating blend of Western civilization’s basic works, with observations on his fellow students and autobiographical details.

‘The Eagle of the Ninth’|
By Rosemary Sutcliff

Young Marcus Flavius Aquila travels north from Roman Britain into present-day Scotland, learns the fate of his father’s legion, and retrieves the Roman eagle, the standard lost in the battle. Realism and high adventure, for grades 5 to 9.

Riki cares for the birds in his backyard throughout the year: building a birdhouse, making food for critters that stay the winter, providing materials for nests, and recording what he observes. Sure to inspire some backyard action.