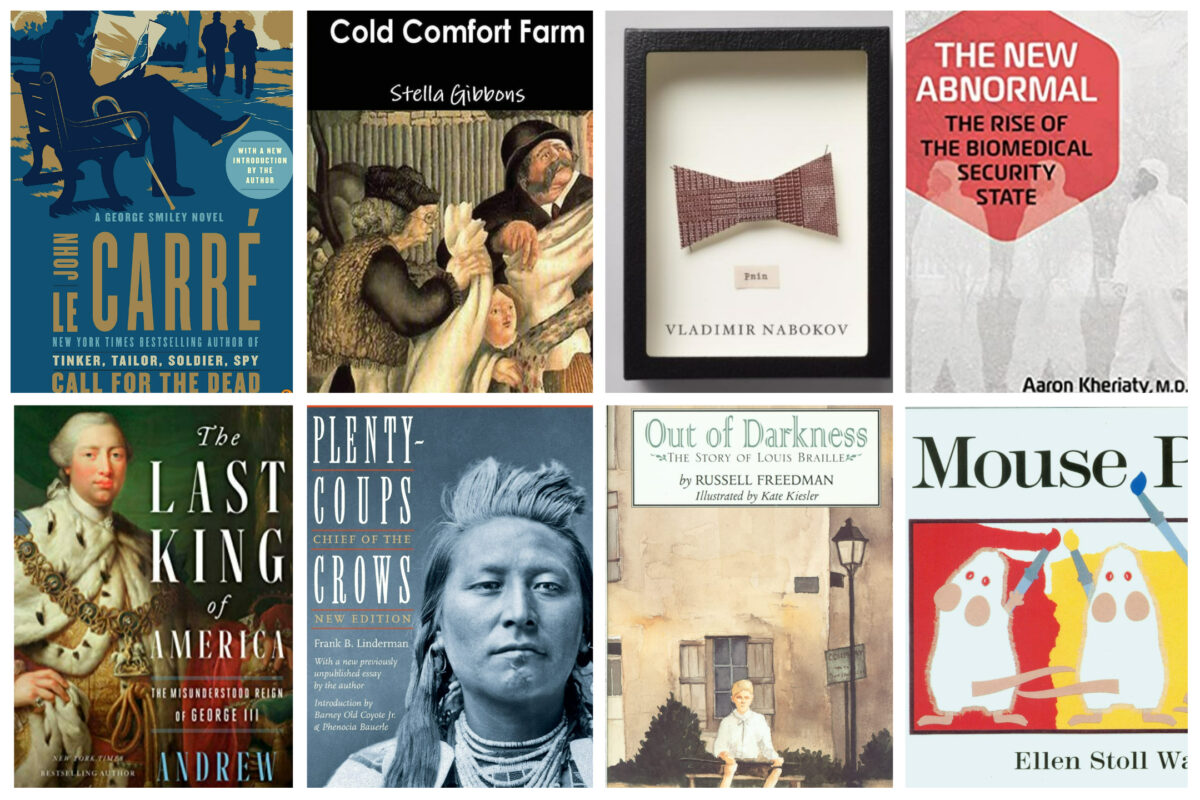 This week, we feature a biography of young Louis Braille for children, and an insightful examination of the biomedical field’s rise to power.

The Clue Is in the Call

‘Call for the Dead: A George Smiley Novel’
By John le Carré

Le Carré was the spy-master novelist of the 20th century. “Call for the Dead” is an introduction to le Carré and his famous character George Smiley. This novel from the former British intelligence agent is both a detective novel and an espionage thriller.

A Funny Read on a Spirited Heroine

This comic English novel brings us Flora Poste, a recently orphaned socialite who goes to live with her rural relatives, the Starkadders―as loony a bunch as may be found in all of literature. Flora is the embodiment of “keep calm and carry on” as she makes it her mission to bring civilization to this crumbling farm and its miserable, dirty occupants. She plans, plots, and intrigues to help the Starkadders find their better selves. Her attempts bring hilarity to the reader and some sanity to the farm.

A Compassionate Look at a Sad Little Man

Timofey Pnin is an out-of-place emigrant from Russia, now a professor at a small American college. Soft-hearted and earnest, he’s a constant victim of his ineptitude. He tries to cling to his job, forge a tie with his ex-wife and her son, and heal his wounds of the past. While the bumbling Pnin is the butt of many jokes, his life has been one of hardship, touched by both the Russian Revolution and the Holocaust. Beautifully crafted, this novel will awaken a love for humanity in readers.

A Clearer-Eyed View of a King

‘The Last King of America: The Misunderstood Reign of George III’
By Andrew Roberts

Best-selling historian Andrew Roberts takes a deeper look at King George III, who fought the American colonies. Relying on unpublished sources from the Royal Archives, the author depicts a much wiser ruler than almost universally portrayed and details accomplishments that have rarely been acknowledged. In this fair-minded perspective, the king who lost the colonies and then went mad is restored as a troubled but noble soul.

‘The New Abnormal: The Rise of Biomedical Security State’
By Aaron Kheriaty

Digging deep into his vast expertise, Dr. Kheriaty describes a society hobbled by fear and groupthink—increasingly on a technocratic, dehumanized path with an authoritarian bent. Yet he offers a hopeful framework to forestall the possible dystopia he sees, complete with practical guidance. A must-read for the post-COVID age.

The Last of the Great Chiefs

‘Plenty-Coups: Chief of the Crows’
By Frank B. Linderman

The last hereditary chief of the Crow Indians, Plenty-Coups (1848–1932) befriended Western writer Frank Linderman and shared stories about the raids against the Lakota Sioux, fighting on the side of the U.S. Army, and working always on behalf of his people. The chief delivers nearly all of the vivid narrative, with asides and explanations by Linderman, drawing the reader into the excitement and dangers of the skirmishes and battles of that time. The book includes photos and a helpful “Afterword.”

The Blind Teaching the Blind

‘Out of Darkness: The Story of Louis Braille’
By Russell Freedman

More than 200 years ago, a 15-year-old French boy, blind since the age of 3, began developing a system of raised punches on paper to teach the sightless to read and write. He brought a light into their darkness. This book is for readers aged 10 to 12.

Three white mice hide away from a cat on a white piece of paper, until they find three jars of paint in primary colors. A joyful and simple introduction to the elements of color, “Mouse Paint” will be asked for again and again.

Arianna Rudorf
Follow
Arianna Rudorf recently graduated from the University of Dallas with a degree in English. Although originally from Illinois, she now lives in the Dallas area, where she is pursuing certification to teach English at the high school level.