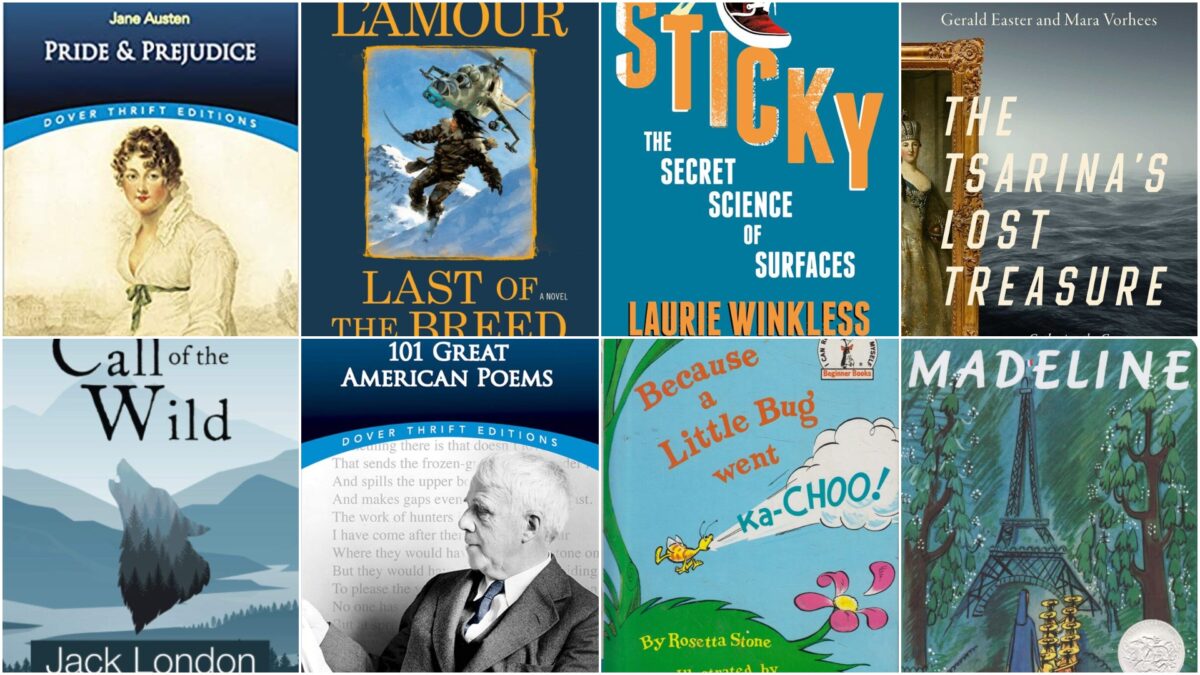 This week’s selection of books includes a history of a treasure hunt, a celebration of poetry, and a novel about a daring escape from the Soviets.

‘Pride and Prejudice’
By Jane Austen

After meeting at a country dance, independent-minded Elizabeth Bennet and wealthy Mr. Darcy must overcome their own flawed natures in order to find love. Written in 1813, this comedy of manners remains one of the most popular novels in the English language.

Great Tale of Adventure and Grit

‘Last of the Breed’
By Louis L’Amour

It’s the era of the Cold War, and U.S. Air Force Maj. Joe Makatozi (part Sioux, part Cheyenne) is a prisoner of the Soviets after his experimental aircraft is forced down. After he escapes a prison camp, he must travel through Siberia to the Bering Strait and across the sea to America. In pursuit is Alekhin, a Yakut native who knows the landscape like the back of his hand. Using skills he developed as a boy and in the Air Force, Joe must defeat both natural and human enemies if he is to evade capture.

A Book You Will Stick With

‘Sticky: The Secret Science of Surfaces’
By Laurie Winkless

What makes things stick together? Why is it useful and when is it a problem? Where does friction occur and how do you reduce it? Why are some things slippery and others not? This book answers those questions and more. It looks at tribology: the science of rubbing and scrubbing. Winkless has a gift for presenting complicated ideas in entertaining and understandable prose: You don’t have to be a rocket engineer to understand her explanations in this delightful romp through science.

‘The Tsarina’s Lost Treasure’
By Gerald Easter and Mara Vorhees

In 1764, Catherine the Great spurred Europe’s crowned heads into a culture war to obtain and display works of art. A Dutch merchantman loaded with Dutch Masters’ paintings purchased for Catherine sank off the Finnish coast while traveling to St. Petersburg. In 1999, a Finnish wreck hunter discovered the ship. The authors tell an exciting story examining art history, the wreck, its cargo, the times, and the salvage attempts.

‘The Call of the Wild’
By Jack London

One of Jack London’s most memorable literary triumphs follows the adventures of a dog named Buck. Stolen from his owners and shipped off to be a sled dog for the Gold Rush, Buck runs into cruel as well as loving owners, all the while feeling a call to return to his natural roots: the wolf pack. A thrilling story set in the Yukon.

A Bargain and a Blessing

April is National Poetry Month, so what better way to celebrate than by immersing ourselves in some verse! Here are great American poems from the last two centuries, among them Robert Frost’s “Stopping by Woods on a Snowy Evening,” Emily Dickinson’s “Because I Could Not Stop for Death,” Ralph Waldo Emerson’s “Concord Hymn,” and Ernest Lawrence Thayer’s “Casey at the Bat.” This inexpensive collection brings back those verses some of us learned in high school while also allowing us to share great poetry with our children.

It Starts With a Sneeze

‘Because a Little Bug Went Ka-Choo!’
By Rosetta Stone, illustrated by Michael Frith

Written under one of Dr. Seuss’s pseudonyms, “Because A Little Bug Went Ka-Choo!” is a hilarious delight as young readers follow the chain of events that begins with a little bug’s sneeze and leads to giant mayhem all around the town.

In an Old House in Paris

Set in a girls’ boarding school in Paris, the “Madeline” stories have entranced children for more than 80 years. In this first book, Madeline is stricken by appendicitis and rushed to a hospital by the intrepid Miss Clavel. Ages 3 to 8.