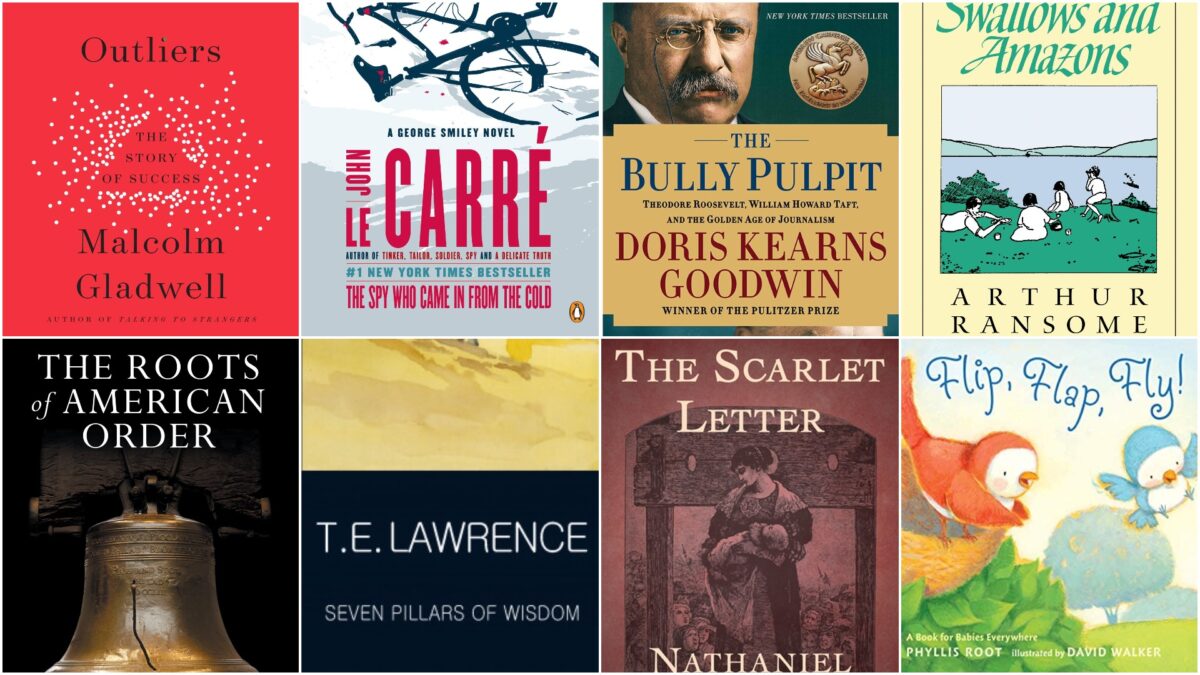 From an iconic Cold War spy novel to a self-portrayal by Lawrence of Arabia of his exploits, here are this week’s book recommendations.

Study of What Makes Us Successful

This book scours the globe to study the cultures of the world and how they’ve contributed to the success of certain people in certain trades and industries. “Outliers” establishes answers for how some people succeed and some people don’t. Impossible to put down.

This book is the third novel by John Le Carré. Although George Smiley, Le Carré’s most famous protagonist, is mentioned, he plays a minor role. The book centers around Alec Leamas, an aging intelligence officer, on his final mission for MI6 to discredit an East German officer. Leamas tries to complete the mission and extricate himself and his lover from danger, back to West Berlin. One of the best spy novels to be written and the one that put Le Carré on the map of great novelists.

This book takes the reader to the turn of the 20th century with the rise of progressivism, muckraking reporters, and Theodore Roosevelt’s installment as president after the assassination of William McKinley. Goodwin covers the influence journalists such as Lincoln Steffens and Ida Tarbell had on U.S. society, as well as on Roosevelt. The author thoroughly discusses the friendship, fallout, and reunion of Roosevelt and William Howard Taft. A well-written book about a glittering age that wasn’t always gold.

‘The Roots of American Order’
By Russell Kirk

This book suggests that the United States grew out of five cities: Jerusalem, Athens, Rome, London, and Philadelphia. Kirk demonstrates how these cities influenced U.S. views on morality, religion, law, government, and citizenship through the writings of great ancient thinkers such as Plato, Aristotle, and Cicero to Enlightenment thinkers such as Hobbes, Locke, and Montesquieu. A great book to reveal the sources of U.S. identity.

At War in the Desert

A great man? Publicity hound? Charlatan? The arguments continue a century after he led his revolt, but one thing is certain about the enigmatic Lawrence of Arabia: His masterful tactics and grasp of strategy helped defeat the Turks during World War I. “His name will live in history,” King George V wrote. His story tells us why.

‘The Scarlet Letter’
By Nathaniel Hawthorne

Hester Prynne breaks the rigid Puritan code when she bears a child out of wedlock. Refusing to name the father, she’s forced to wear an “A” on her chest, condemning her as an adulteress. As this story unfolds, we gain insights into others involved with her: Roger Chillingworth, Hester’s cold, estranged, and twisted husband; the Reverend Dimmesdale, who hides his own dark secrets; and Pearl, Hester’s daughter who goads the others toward confession and truth. A timeless novel about moral temptations and spiritual warfare.

‘Swallows and Amazons’
By Arthur Ransome

In the first of 12 volumes in this series, the Walker siblings befriend the Beckett girls from across the lake. They sail, camp out on Wild Cat Island, and play pirates and explorers. One of the classics of adolescent literature.

A Picture Book That Inspires

This immensely adorable picture book features encouraging moms and adventurous baby animals, along with a rhythmically satisfying text that bursts with curiosity and love. Parents are sure to hear, “Again, please,” after every read.