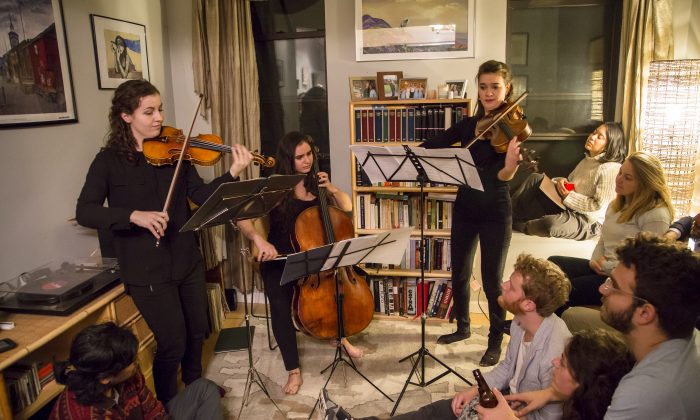 Entrepeneur: Classics Anchor Us in This Transient World

People show up at an apartment, some strangers and some friends. At first there’s the typical uncomfortable ice waiting to be broken. Soon people gather and sit on the floor, and the musician—perhaps a cellist—takes his seat and begins to play.

The audience members, some kneeling at the feet of the musician, some with their eyes closed, some rocking slowly to the music, listen intently to celestial works by composers like Bach or Beethoven.

The very definition of classics is that they are lasting and have depth, substance, and quality.

At intermission, 25 minutes or so later, the energy in the room is palpable, the volume of the conversation has gone through the roof, and everyone is on good terms—whether friend or stranger—without much more than the music to account for the change. This is a Groupmuse experience.

After the party, “people’s hearts are ready to burst with goodwill,” Sam Bodkin, the founder of Groupmuse, said on Jan. 11.

Bodkin is not a musician, although he wishes he were. He fell in love with classical music at age 19, when his neighbor, a cellist, showed him a recording of the piece he was working on: Beethoven’s Große Fuge (Op. 133). The piece was so moving, so intoxicating for Bodkin, that he bought a copy of the recording and listened to it 10 times a day for the next two weeks.

He realized for the first time that he didn’t have to trade off enrichment for enjoyment. These could be married.

Until this point, his preconception of classical music had been that it was “not for me,” he said. “Important people told me it was important,” but these people had nothing to do with him.

After his initial revelation, he downloaded as much classical music as his iPod could hold and explored it, eventually beginning a more intellectual inquiry. When later he would hang out with students of the New England Conservatory while they rehearsed, afterward he would feel that a sudden, unexpected vivacity had been interjected into the bleak world that we share.

What Our World Needs Now

All cultures leave behind beautiful artifacts, Bodkin explained. We can deduce from these that humans need beauty and inspiration. Yet we live in a time when these needs are not met, despite many of us having more wealth and comfort.

In our era of transience, in our expendable present, the material content of our lives is used and then thrown away. “We know we are really renting phones—it’s the illusion of buying them, because as we add apps and updates they become so slow that we need a replacement in two years,” he said. Everyone knows and accepts this.

When we also consider that these phones hold most of people’s lives today, so that with each new device our life is restructured, it’s clear the changes in our way of life are significant.

It’s not only our material goods that are disposable, but our community ties seem to be, too. We leave the home and the community in which we were reared; we move every two or three years, especially straight out of college, said Bodkins, who is 27.

And the quality of our consumer culture lacks depth, he said. Reality TV exemplifies “this cultural race to the bottom. No writers, no actors, no creative insight at all! Just shallow drama and vanity. And that’s by design: It’s much cheaper and easier to pump out season after season if you don’t have to deal with the capricious complexity of human creativity.”

But imbibing this meaningless entertainment has an appreciable impact “on our spiritual and culture landscape,” he said.

The classics, on the other hand, have been around for 200 to 300 years. In fact, the very definition of classics is that they are lasting and have depth, substance, and quality.

We believe this eternal art can reunite us all with the unknowable mysteries of life.
— Sam Bodkin, founder, Groupmuse

Generations of artists have said: “There is something here. These pieces have relevance.”

On another level, coming from so long ago, classical music provides a connection to our past. Bodkin believes that knowing our history may not prevent us from making mistakes at the cultural level, but can “serve as a reminder and allow us a dialogue with the past.”

The classics offer us an anchor in the flow of the transience as it rushes past. They give us something of substance and quality that endures and inspires us. They are something we can hang on to and that also invite us to reach a deeper, nearly forgotten part of ourselves.

As Bodkin explains on the Groupmuse website: “We often forget just how mysterious each and every one of us is in this hyper-rational world of demography, commerce, and market research; it’s easy to think we’ve got it all figured out. Music is a powerful reminder that there are major aspects of the human experience that are beyond knowing. We believe this eternal art can reunite us all with the unknowable mysteries of life.”

Seeing this gap in our culture, Bodkin devised Groupmuse, an online service that hooks up professional musicians and a willing host.

Anyone can host the event, and it can happen just about anywhere: “We can meet under a bridge, in a dingy apartment, or at a beautiful hall,” Bodkin said.

When someone agrees to host a Groupmuse event, they send out invitations to friends and then generously open their home (or another spot) to an audience that may also include some local groupmusers or regulars.

“All of this can be put together remarkably fast because so little is needed:  If 10 people get together, we can bring in a cellist who plays Bach. For 40 people, all we need is four chairs for a string quartet. It can take place anywhere,” he said.

At the events, attendees each pay at minimum $10, a sum considered accessible to most people, and all of the money goes to the musicians. The musicians averaged $160 per event the past quarter, so they are receiving some income from their craft.

The musicians choose the 45-minute music program—at least half of which has to be “standard classical repertoire.” Besides the money, they benefit because a Groupmuse event is treated as a concert, not just as an excuse to get together, so musicians gain experience performing before an attentive audience.

“Typically they are playing for their peers, who may be new ears to this kind of music. It’s liberating for the musicians,” Bodkins said.

In response to the seemingly short-lived nature of our communities, Groupmuse aims to build community. It’s bringing people together “to share something big and deep and wonderful,” Bodkin said.

By having people experience beautiful, inspiring music together, they are introduced to an enriching social experience.

To foster community, Groupmuse insists on short programs so that the audience has time to socialize, asks every host to leave room for audience members outside of their social circle, and encourages guests to sit on the floor to make the experience as far from that of being in a high-toned concert hall as possible.

If people feel comfortable, the experience will be deeper and people will come back.

“Once people experience the joy and camaraderie, they want to do it again,” Bodkin said.

Essentially, the group does the recruiting for the next get together. “‘Who wants to host the next one?'” Bodkin asked at the very first event.

“These [events] make an extremely strong impression and soon they are regulars.”

There are Groupmuse events in New York City nightly, and San Francisco and Boston are not far behind. Some people host an event every month, and some attend on a weekly basis.

Holding regular Groupmuse events fulfills a real need in people. “We all need to share in something that is larger, that is greater than ourselves so that we can be reminded that we are more than our menial jobs, so that we can remember we are mysterious creatures, and when we do so in the company of others, people’s hearts are filled with joy. They are enriched and enlivened.”

Now, after three years, Groupmuse is working a model on that can be used nationwide and to further “renew a cultural landscape that seems so lacking these days.”