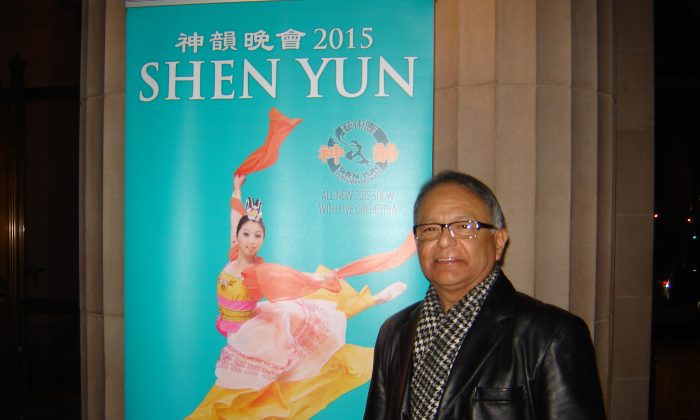 SAN FRANCISCO—An artist’s manager responded to the music in Shen Yun. “The orchestra is just magnificent,” said Mr. Victor Pamiroyan. He manages musician and visual artist Pete Escovedo, “one of the original members of the Santana band, but he left Carlos to form his own big band, big 12 piece orchestra. And we’ve toured the world,” said Mr. Pamiroyan. He is proud of his Renaissance man client. “If you want to see a performance we did for President Obama, go to the media and video link” on his website, he said.

At War Memorial Opera House on Jan 8, Mr. Pamiroyan said he could not wait “to sit back in my seat after intermission.”

The Shen Yun orchestra blends two of the world’s greatest musical traditions, Chinese and Western, according to the program. He said the combination of Western and Chinese musical styles and ancient Chinese instruments” that date back to who knows how long … has its own unique sound, and quality of sound, that it complements with the orchestra sound.”

“The orchestra and the dancers complement each other very well and just leave one very impressed,” said Mr. Pamiroyan.

Shen Yun’s mission is to revive authentic Chinese culture. Its program book welcomes audience members with the words, “Prepare to enter a magical realm of beauty and purity, a place where goodness always prevails, and legends come to life.”

Mr. Pamiroyan shared that sense of optimism. “It’s very touching, very moving, and I have to agree with the presentation of the speakers that announce the show, that righteousness and truth will prevail eventually,” he said.

He noted the richness and diversity in the dances and music: “They all touched my heart … they’ve all touched me in a very different way,” he said.

The experience was universal. “Music is international. Music is the communication of all people,” said Mr. Pamiroyan.