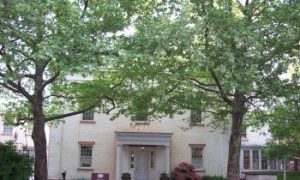 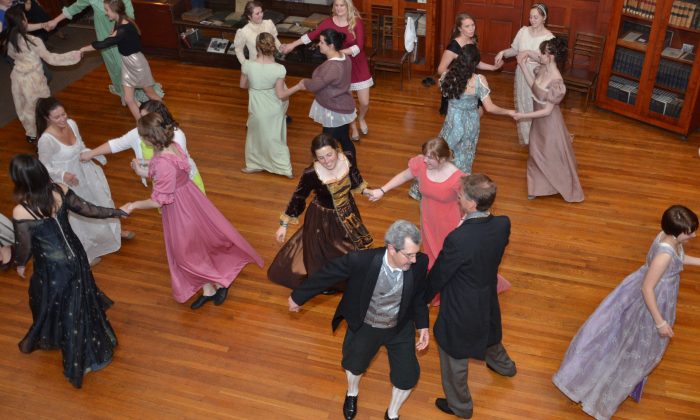 English Country Dance Fun for All

A step back in time
By Chelsea Scarnegie
biggersmaller
Print

Girls come in from the warm and sticky air, shake off their sandals, and gather on the dance floor.  They giggle excitedly about their weekend plans and practice a few warm-up dance steps, although they feel warm enough already.  There is only one Friday class that these girls don’t seem to mind attending:  Jane Austen Dance.  The instructor—a tall, slender woman named Rosalind Clark—stands at the stereo with a small yellow booklet that contains every dance that the girls may learn.

The proper name for the style is English country dance.  Its cousin, contra dance, is a much more complicated style.  This is the American take on the dance that even attracted figures such as George Washington.  Even more distantly related is the new “techno contra,” which includes all of the flashing lights, glow sticks, and loud music that one would expect at a modern dance party—minus the twerking.

Contra is the American take on English country dance that even attracted figures such as George Washington.

Clark takes command of the classroom with a quiet authority, and the girls line up with their partners.  There are smiles and a bit of laughter that comes with the awkwardness of learning a brand new dance.  Fifteen minutes later, those smiles are turned to expressions of the pride of a freshly conquered dance to add to the collection.

Clark calls the steps and observes with delight as her pupils master dances with names like “Haste to the Wedding” and “Black Nag.”  To her, this isn’t just a hobby or another class to teach.  This is something as old as a 17th century village and as modern as the girls standing before her.

She explains that it is a type of dance style that all ages can enjoy, but it is especially popular among older people.  English country dancing involves less movement than contra dancing, so these people find it easy to perform the simple steps that are required of them.

Children enjoy the dance as well.  “There are many children who take the dance very seriously,” Clark said.  “They know how to do it, and they don’t mind telling you if you’re doing it wrong.”

Clark ventured in English country dancing in Amherst, Mass. during the late 1970s—about two centuries after Jane Austen’s birth.  She remembers going to dance events in college with her friends and sitting at a pizza shop afterward to chat.  She attended the Pine Woods Dance Camp in Massachusetts where she learned to be a caller.

Her own Jane Austen dance class has enjoyed popularity among girls.  “I always loved reading books by Jane Austen or the Bronte sisters, so I was curious to learn the types of dances they may have performed,” says Payton Moore, a former student of Clark’s dance class.

“After taking the class, I gained a broader understanding of the period that these novels were written in.  It’s one thing to sit and read the books, but to actually perform some of the dances makes you feel like everything is coming to life.”

Chelsea Scarnegie, from the Chicago area, has a degree in writing. This post can also be found on the Thistle Magazine blog.