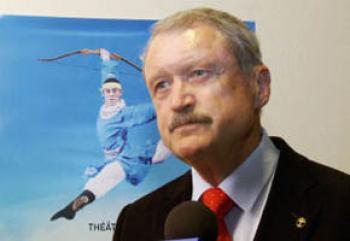 Peter Egli, an engineer, who made the trip from Bern to watch Shen Yun. (Courtesy of NTD Television)
Arts & Culture

Engineer: Moment Beyond Time and Space

He made the trip from Bern especially to applaud the world’s premier of classical Chinese dance and music presented by the New York-based Shen Yun at the majestic Theatre de Beaulieu.

The colorful and exhilarating performance centers upon the revival of China’s true heritage divinely bestowed 5,000 years ago.

Mr. Egli said he was left with a “very deep impression” and renewed his appreciation for the cultural freedom he has enjoyed from living in Switzerland.

“In Switzerland, freedom of human rights, freedom of thought are held in high regard, and I felt that through these spectacular scenes presented here, this evening, they have precisely portrayed these values that play such a very important role, but cannot be experienced in China today," Mr. Egli said.

"It's an extraordinary thing, the likes of which I've never before seen. I attended last year in Neuchâtel, but tonight I was even more impressed because there was a live orchestra, so the level was exceptional and I am very impressed."

Shen Yun International Company Orchestra's fusion of Chinese and Western instruments is one of the company's unique trademarks.

'An event above all'

His feelings were shared by Roland Glauser, another engineer who found the performance, "fantastic, with beautiful scenes, great pace and precision from the dancers. It's hard to explain,”

"If I have to describe it in a few words, I would say 'amazing, fantastic, powerful, colorful, cultural—an event above all the rest.'”

’A breath of fresh air’

And if the two engineers had attended performances of Shen Yun in Neuchâtel, for physician Nicolas Belleux, he discovered a show that he described as "really very magical."

"We are not used to this kind of show, and what a dream. So we come out more peaceful, more joyful, it's a breath of fresh air," Mr. Belleux said. “We understand better not only the historical, philosophical aspects, but also the background."

He went on to say: "Seeing these dancers doing really impressive acrobatics is to us like gymnastics, while it really is not at all. And this blend of grace and physical effort is superb."

In concluding, he added, "If one wants to spend a few moments outside of time and space, you must come see this show."