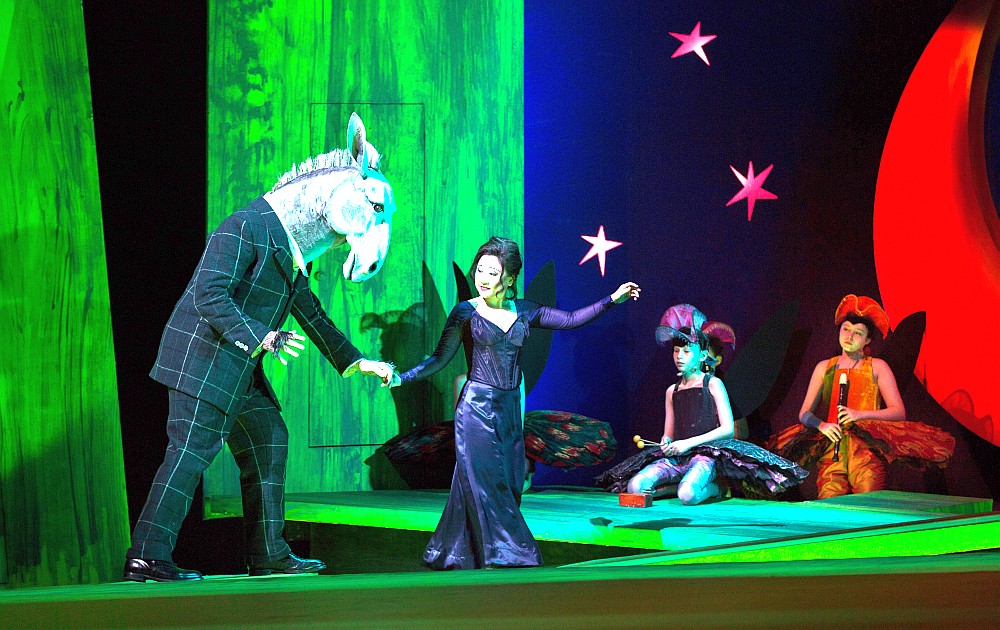 Enchantment at the Met: ‘A Midsummer Night’s Dream’

NEW YORK—To honor the 100th birthday of Benjamin Britten (1913-1976), the Metropolitan Opera is reviving the 1996 production of “A Midsummer Night’s Dream.” Britten wrote the music and co-authored the libretto with his partner Peter Pears.

On a recent Saturday night the house was packed, with a number of children in attendance. Because the production started at 8 p.m. and lasted almost until midnight, some of the families with youngsters left after Act 2. At least one boy whose parents stayed to the end had to wake him from a deep sleep. It’s too bad because the ending is especially magical and is preceded by comic hijinks.

As long as the opera is, it actually omits about half of Shakespeare’s text. The action begins not in the city of Athens but in the nearby forest, a world of fairies and rustics. Oberon (king of the fairies) argues with his queen over an Indian boy she is protecting. There are various groups of lovers and suitors on the run.

Lysander and Hermia are eloping to avoid her father’s command that she marry Demetrius. Demetrius is also pursuing Hermia with Helena chasing after him. Meanwhile, a group of workmen are rehearing a play about two lovers (Pyramus and Thisbe) that they plan to perform at the wedding of Theseus (the Duke of Athens) to Hypolyta (the Queen of the Amazons).

Some misdirected love potions cause confusion: Lysander is made to fall in love with Helena (who rejects him) and Tytania becomes enamored of Bottom (a weaver, who has been turned by Oberon’s servant Puck into a donkey). Everything is sorted out by the end, with the couples reconciled and the rustics putting on a hilarious performance of “Pyramus and Thisbe.”

The conductor James Conlon brought out all the beauty of the score. He is particularly knowledgeable about the composer and has an article “Message, Meaning and Code in the Operas of Benjamin Britten” in the Hudson Review’s Autumn 2013 issue.

The cast was excellent, both as singers and actors: countertenor Iestyn Davies as Oberon, the delightful soprano Kathleen Kim as Tytania, Joseph Kaiser as Lysander, Elizabeth DeShong as Hermia, Michael Todd Simpson as Demetrius, Erin Wall as Helena, Ryan McKinny as Theseus, Tamara Mumford as Hippolyta, Matthew Rose, very funny and rich-toned, as Bottom, and Barry Banks as Flute (the part Peter Pears sang in the original production). Riley Costello is the energetic Puck (a non-singing role).

The children’s chorus (made up of boys and girls) is also praiseworthy. Philippe Giraudeau’s choreography adds to the amusement.

Antony McDonald’s set is a mixed bag, sometimes striking but at other points too minimal. Similarly, his costumes are an occasionally awkward mix of the modern and ancient. Whatever magic is missing in the visuals was supplied by Britten and the superb orchestra, chorus, and cast members.

The last performance this season of “A Midsummer Night’s Dream” will take place on Oct. 31 at 7:30 p.m. at the Metropolitan Opera House (metoperafamily.org).